Rainbow Bounty on the South Fork of the Snake River

So much goes into an 8 hour float trip, at least for a guy who cooks for a living on eastern Long Island. The planning for a late September Snake River float trip started in May. A phone call to Chris “Simbo” Simonds revealed that he had loaded his truck in Centennial, Wyoming where he had lived for several years and moved to Idaho. I call Simbo regularly. He is godfather to my middle child and a faithful fishing partner. In September 2016 we spent 5 perfect days fishing Wyoming from the Encampment and North Platte rivers all the way west to the Wind River in Dubois. That trip involved 2 men, a truck and a mission to catch fish. It was a thrill. I met some world class guides, caught some big fish, and made a commitment to return to my friend’s doorstep the following year to do it all again. 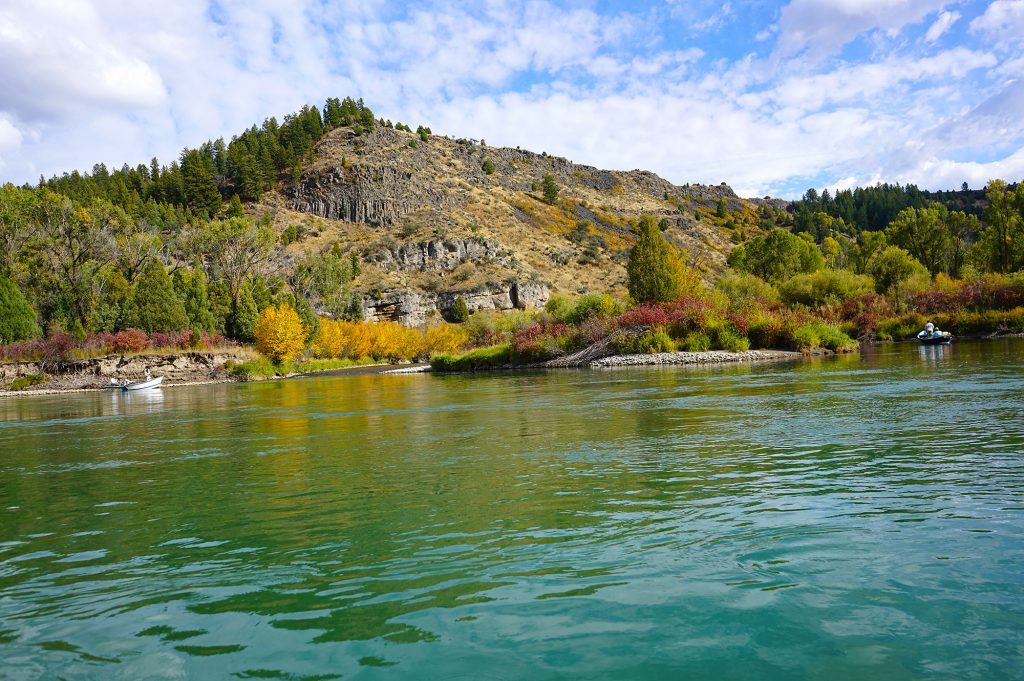 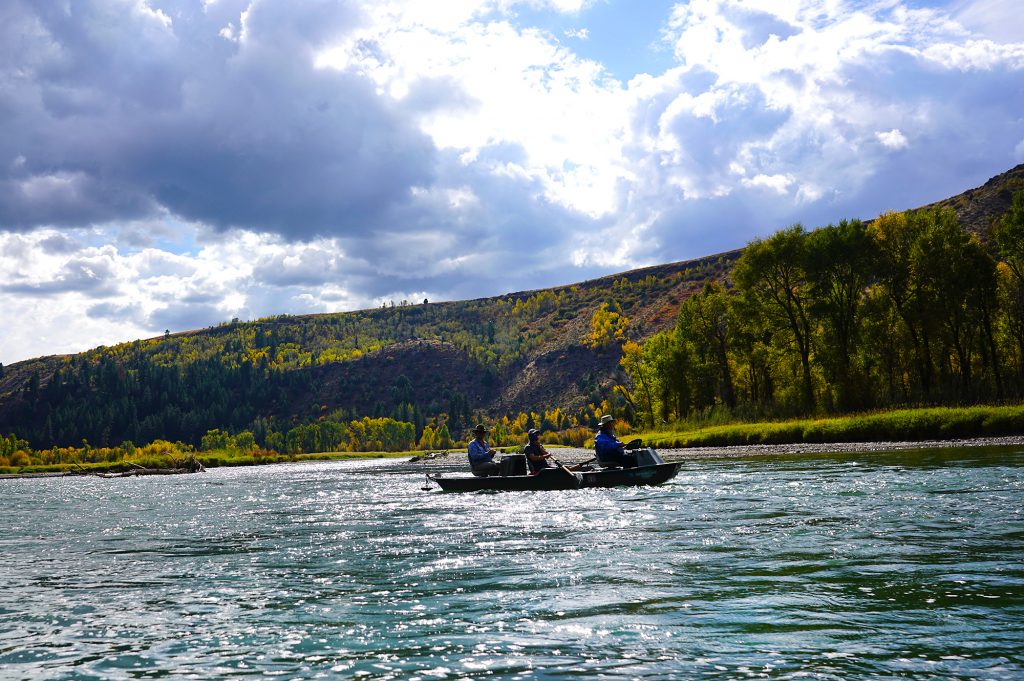 This time around, with Simbo now living in Driggs, Idaho and working the desk at Henry’s Fork Anglers in the tiny village of Last Chance, the decision to fish rivers on the western slope of the Teton mountains was a natural one. We started the conversation by focusing on which rivers to float and which rivers to wade. We agreed that it was important to spend a day in Yellowstone—which some consider the wading capital of the trout world. It was easy to then set our sights on the South Fork of the Snake for a float trip. The Snake River in Idaho is a gold standard in the books of western United States fishing lore.

With the plan coming into view, my next step in July was to book a lodge that was centrally located for easy access to Points South, Last Chance and then the Snake river, specifically Swan Valley and Points North, Yellowstone National Park. Simbo suggested the Lakeside Lodge on the northeastern edge of Island Park Reservoir. Primarily a hunting lodge, the Lakeside Lodge turned out to be a perfect choice as it had rooms available and was well priced for my budget. It was a nice situation for a couple of anglers, as the more highly praised fishing lodges in the area were more expensive and seemed to be all booked up. 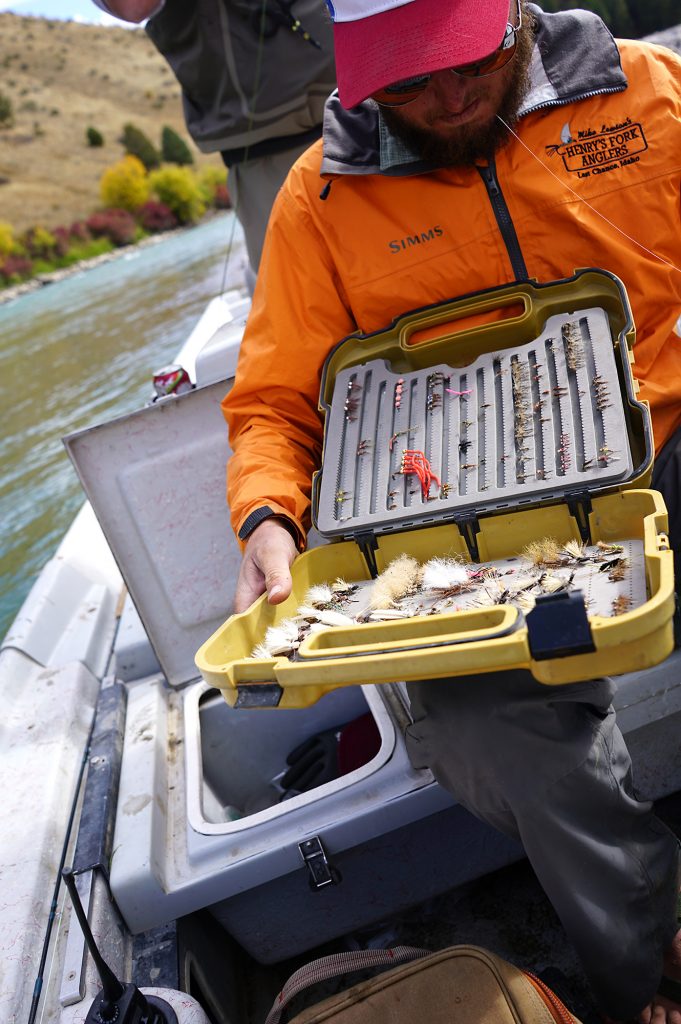 In August, we started discussing guides. This was an easy conversation as I knew that Simbo was on the Henry’s Fork Anglers crew. He had gotten to know many of the best guides in Idaho from his spot near the register, behind the huge fly selection, in the lodge pole building that anglers world wide think of when they start planning a trip to southeast Idaho.

For this float, Simbo tightened up a plan with Arkansas native Paul Hoelscher, a seasoned veteran from the Henry’s Fork Anglers team. Paul has hammered out a life for himself in Idaho, guiding over 100 float trips a year. He’s a husband (proudly pronouncing that his wife is a “world class fly caster”), a new father, and a high altitude hunter. An hour long drive from Last Chance took us to the launching dock on the Snake river at Southfork Outfitters, just north of Swan Valley on Highway 26. Paul gave us a quick breakdown on what we might need for the day. We spent a few minutes in the Southfork Outfitters fly shop and were in the river by 9am.

I was amazed by the traffic on the river. On the Henry’s Fork the day before, we didn’t see another drift boat all day. The activity on the Snake was like rush hour traffic. Over the course of the day we saw at least 60 drift boats, but regardless the river produced for us. We caught more fish than I can count and all species—browns, cutthroat, rainbow and whitefish. We also saw bald eagles at almost every turn. The Snake River is a large body of water, wide and slow in some spots. As it spreads out, the current runs faster and Paul showed his skills navigating the Clackacraft drift boat through riffles and rapids.

After an hour on the river, I hooked a solid rainbow on the wiggly worm (a crimson rubber tube) that was the middle fly in what Paul refers to as the ‘triple threat’—a hopper on top, wiggly worm in the middle, and a small midge on the bottom of the leader. The fish hit in the middle of the river and went deep into the current for a few minutes. Once in view, Paul identified it as a rainbow and explained that since there is a bounty on non-native rainbows in the river, we could keep this fish and include it in our lunch menu.

I was surprised to hear a seasoned fishing guide acknowledge that a fish might make it to the skillet and wanted to learn more. Paul explained that the non-native rainbow trout, introduced to the Snake years earlier, has had a negative impact on the river’s Yellowstone cutthroat population. The aggressive feeding habits of rainbow trout have reduced native Yellowstone cutthroat populations, especially as the young trout or fry fall prey to the larger population of rainbows in the Snake River. 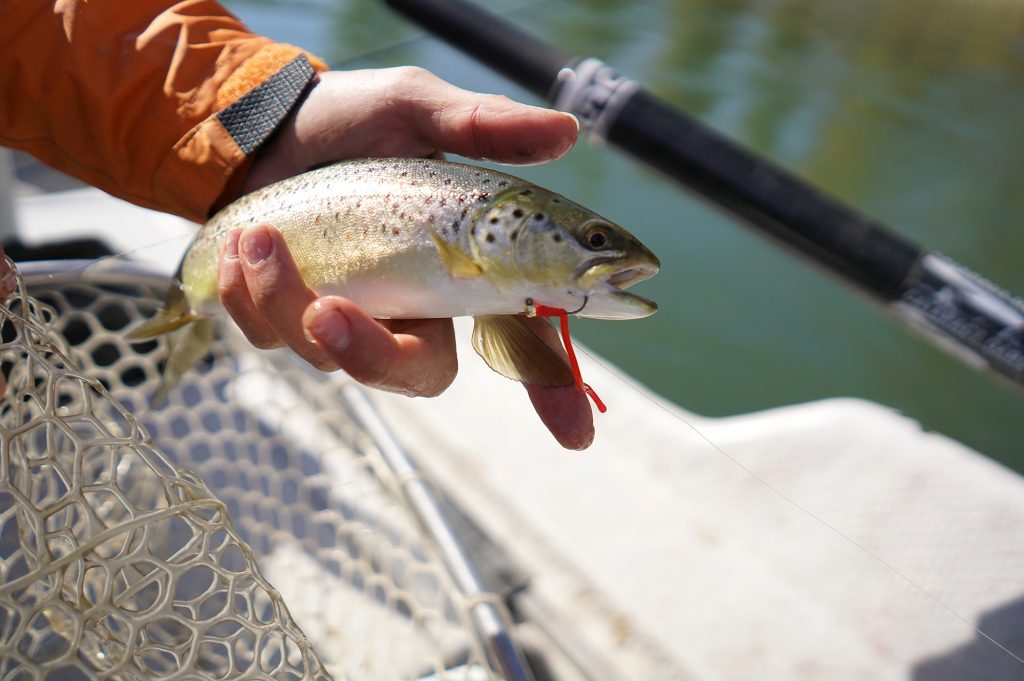 On catching a non-native rainbow or a hybrid “cutt-bow”, anglers are encouraged to bring the head to Idaho Fish and Game (IDFG) to be inspected for a tag. If there is a tag implanted in the trouts head (the IDFG has shocked parts of the river and inserted hundreds of chips into the rainbows nasal passages), a bounty of up to $1000 will be paid. This is intended to encourage anglers who otherwise would not keep fish to remove them from the river. 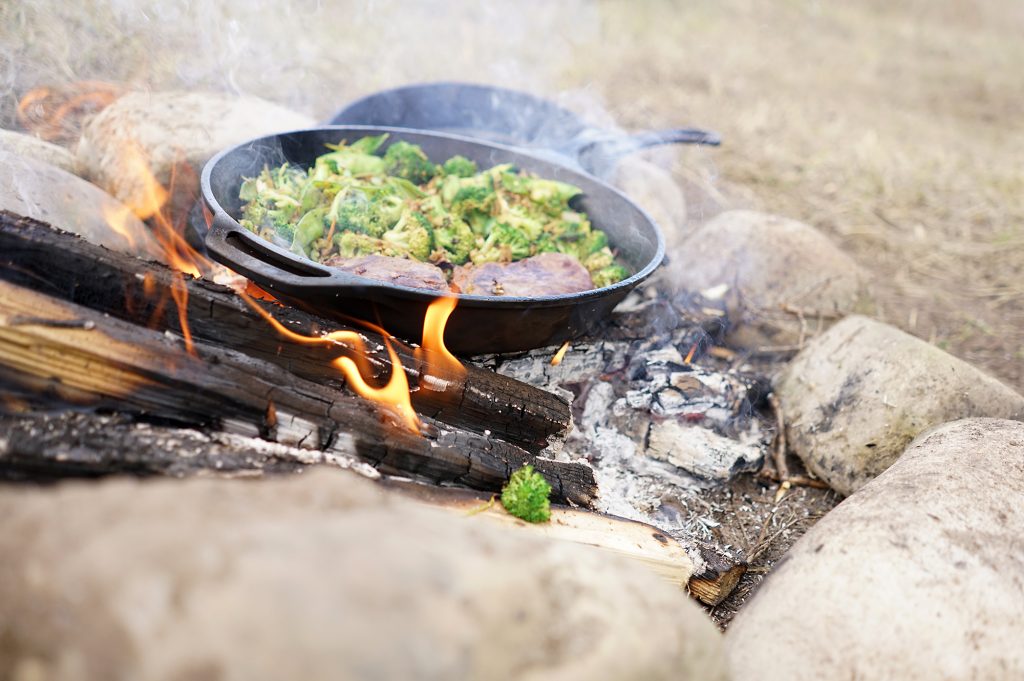 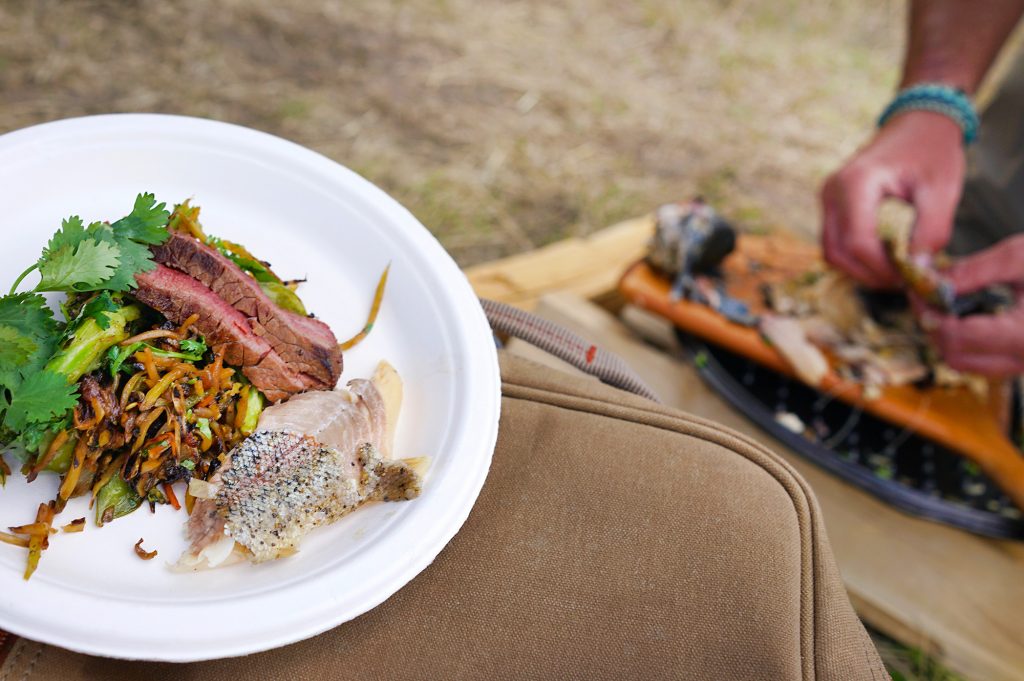 We didn’t need to bring the fish to the IDFG because it was determined to be a perfect addition to our planned riverside lunch of Idaho elk steaks that Paul had harvested from the wild a year earlier. This was the last pack of steaks from his freezer. Combined in the skillet with vegetable oil, jalapeno, garlic, ginger and soy the 19 inch rainbow added a nice light balance next to a vegetable stir fry and the elk top round steak. Cooked over fire in a cast iron skillet, the trout along with a bag of mixed stir fry vegetables and two 6oz steaks was a perfect mid day lunch for 6 men. We appropriately named the dish “Idaho Surf & Turf”.

As we rounded the last bend in the river after a delightful 8 hour float, Simbo and I spent a few minutes casting to rising trout on the edge of the river while Paul expertly cranked the drift boat onto its trailer. The slow trek up the hill to the west of the Snake was dramatic. We followed switchbacks for 20 minutes until we reached the top and came out onto miles and miles of open barley and wheat fields.

A fabulous sunset burned into the mountains as we bounced down the ruts of a  farmer’s dirt lane heading back to highway 26. As I watched the mountains in the distance turn from bright orange to deep gold through the cracked windshield of Paul’s aging Toyota pickup truck all I could think of was how to get back here. One float just isn’t enough. 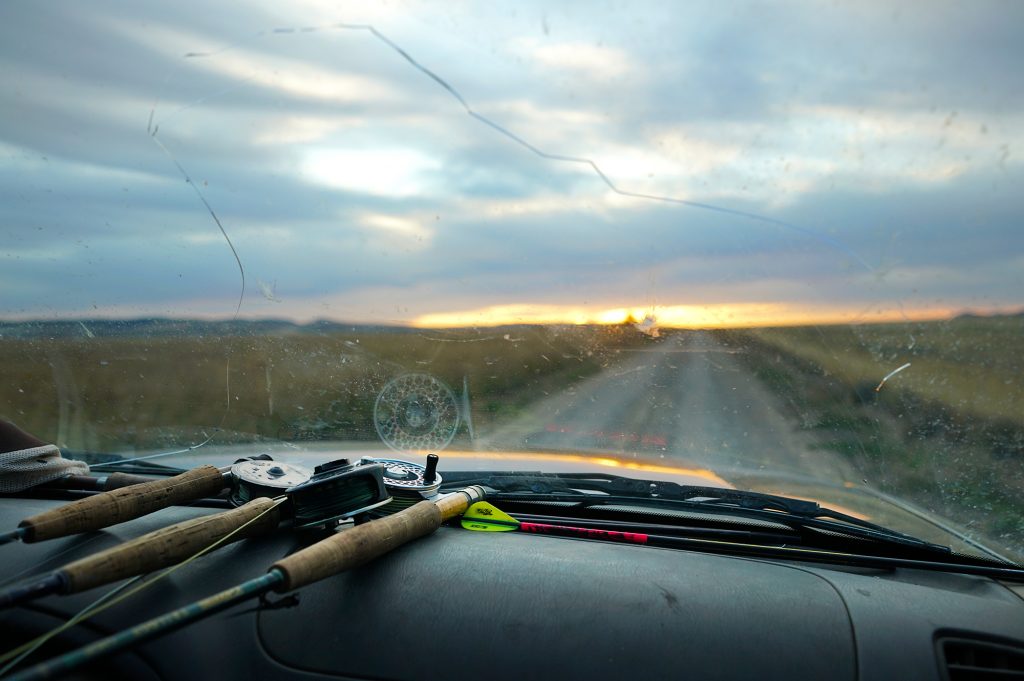 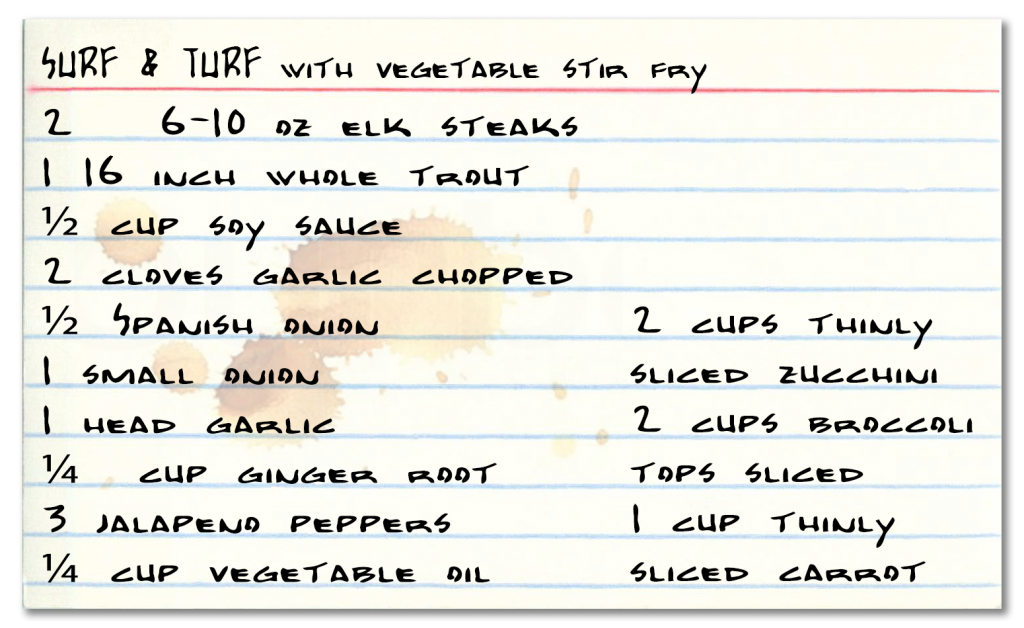 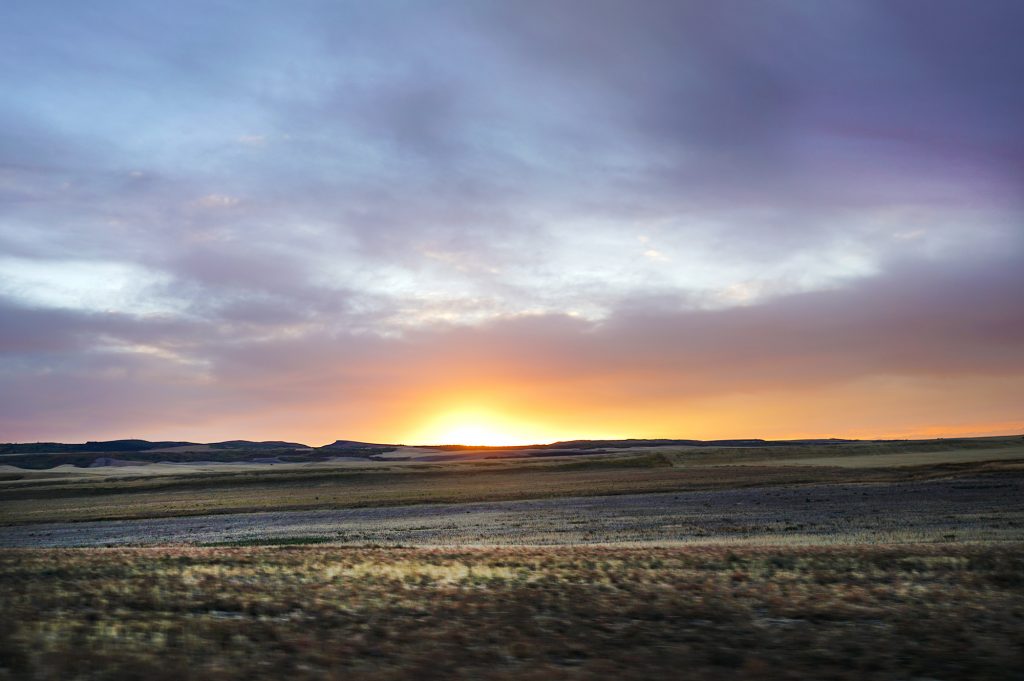