Fly Fishing and Cooking on the Henry’s Fork

Morning light is slow to fill Idaho skies on a late September day, a pink line of promise covered the range to the west as we looked across the Henry’s Fork river. No wind to speak of, dark blue cloud free space above revealing the last of a cool night’s stars. Arriving in this tiny town in cover of darkness all I could really tell at first was that we had stopped in a village on the edge of the wilderness, actually a collection of buildings on a highway in the wild untamed frontier that still exists in 2017.

There’s a fabulous food trailer next to a gas station on a quiet stretch of highway 20 in Last Chance, Idaho. It’s called “Sweet Peeps Kitchen”, the Chapolera Coffee is surprisingly delicious and it’s safe to say that their egg sandwich is world class. 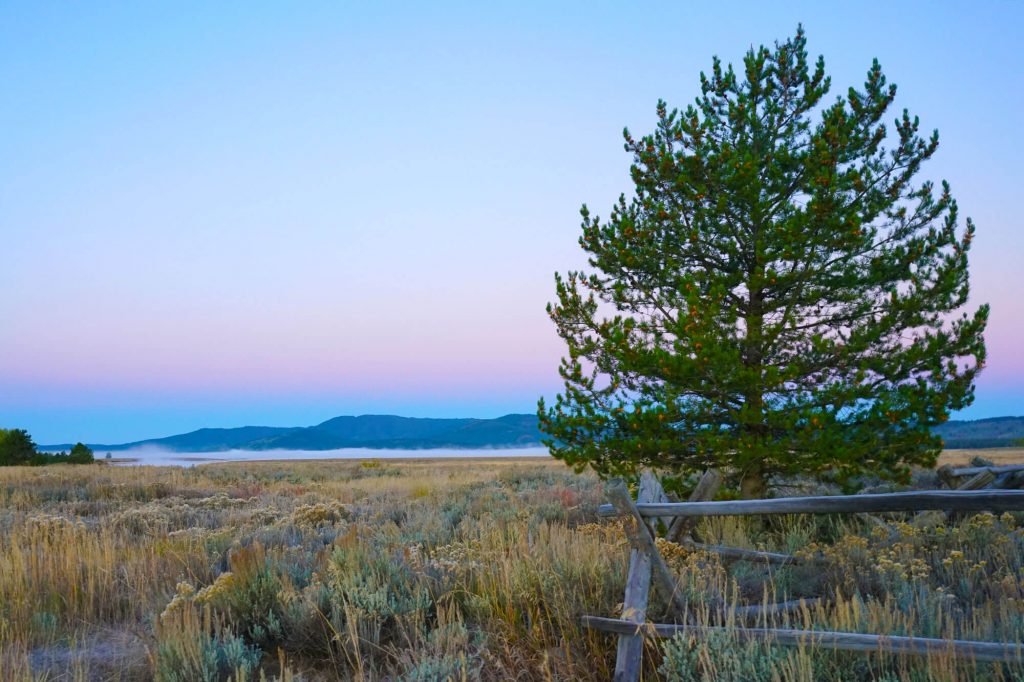 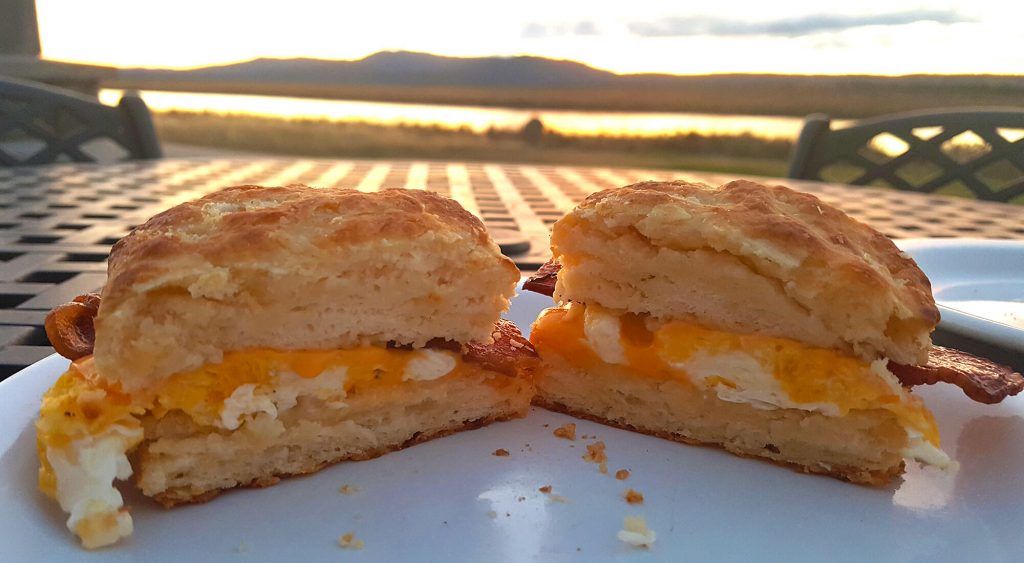 It was about 7:00 am when we approached the little village of Last Chance, about 15 minutes south of the Lakeside Lodge on Island Park reservoir where we had spent the night. My old pal Chris “Simbo” Simonds and I were scheduled to meet our guide Tom Grimes just up the road at 8:00, so we had time to get our day started right with a hot cup of Joe and small flaky homemade biscuit filled with scrambled eggs and cheddar cheese.

As we pulled into the parking lot at “Mike Lawson’s, Henry’s Fork Anglers” I realized just how important the fly fishing industry is to this area. Entering the log structure that houses Mike’s guide service and retail fishing operation I was inspired, his fishing enterprise provides an income for several families in the area.

Without the Lawson’s entrepreneurial commitment to this small unincorporated village there might not be more than a gas station and a bar. I observed more than 10 guides preparing for their day, an impressive group of men and women dedicated first to a well crafted guide program 30 years in the making and second but equally important, a dedication to a professionally managed Idaho fishery that sustains their income.

Shortly after arriving in the shop with Chris I watched as each guide received their clients, signed them in with appropriate documentation, discussed their interest in the days fishing adventure and outfitted them with specific streamers, flies, leaders and gear. The room filled to capacity with optimistic fishermen and emptied out in a calm, cooperative manner in less than an hour. All under the watchful eye of the shops effervescent grand dame Sheralee Lawson, who along with her husband Mike was born and raised in the Henry’s Fork Valley. Kismet would have it, after touring the place I met Sheralee who told me that they actually started their fly business in the early 70’s at the legendary Gates Lodge where I began my American Rivers Tour. With 6 months of bucket list fishing under my belt, I’m now realizing the fishing world is really a tight knit community, proud of where they’ve been, who they know and the work that’s gone into building a life in remote places like Last Chance and Grayling. 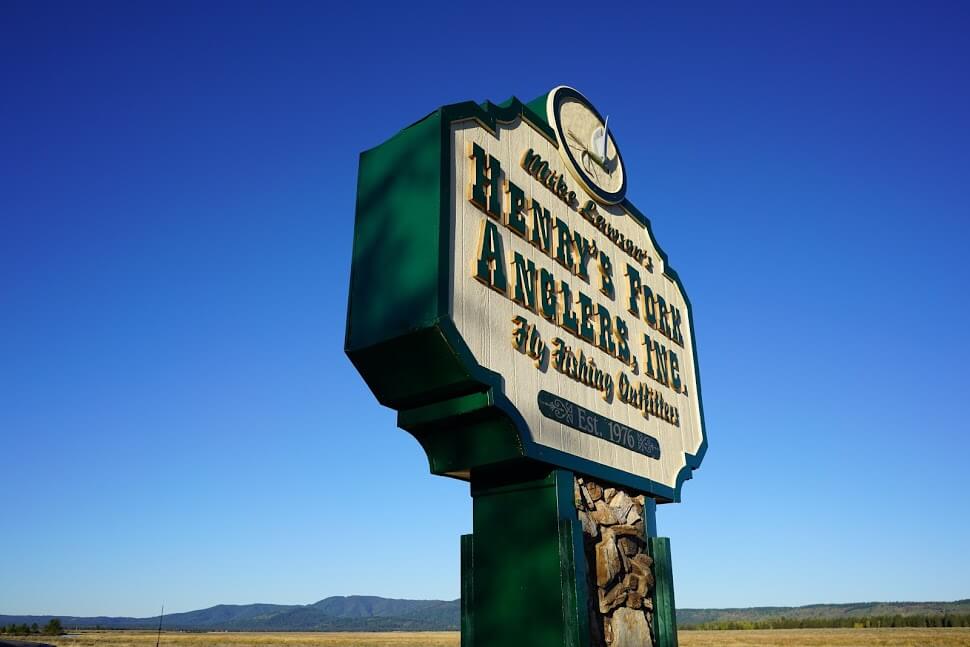 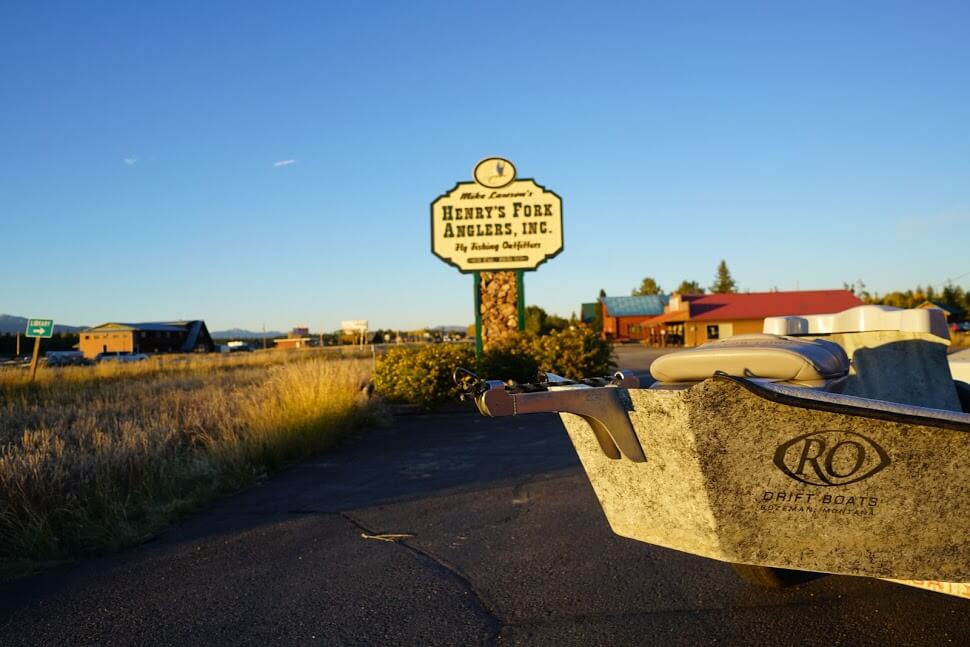 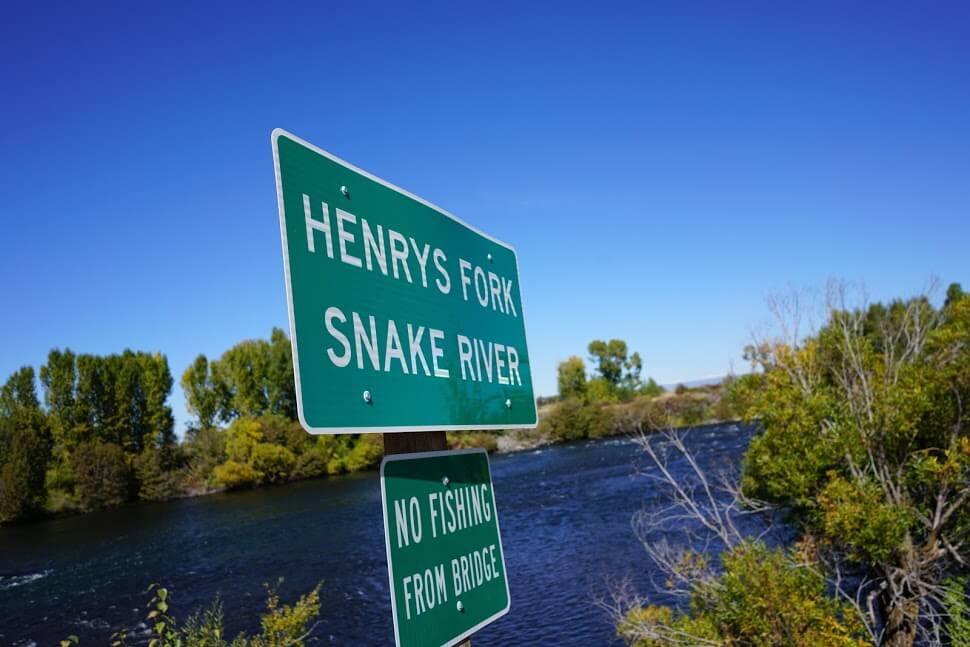 As we pulled out of Last Chance with Tom’s RO drift boat in tow, we discussed the float and our plan for approaching the river just below a spillway outside of St. Anthony from a public parking area just before the bridge.

Important to note that while the river bed is open to all, accessing the river from private requires permission. Our first stop was a visit to the Lawson’s ranch along the banks of the river a mile down stream where we could use the Lawson families fire pit to prepare a mid morning brunch, I cooked while Simbo started his fishing adventure wading in the river. 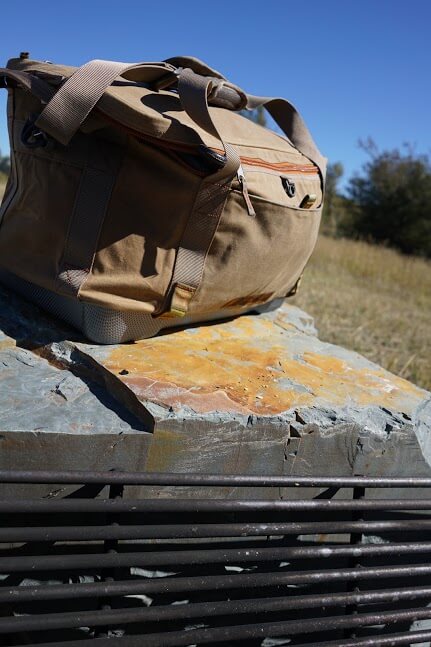 Having this scenario in mind, prior to our arrival in Last Chance, I’d filled a Fishpond canvas cooler with all the necessary ingredients to make my favorite brunch dish, Red Flannel Hash. With help from Tom who has spent his career in the off season working in kitchens around the Henry’s Fork Valley, the whole fireside effort was a breeze as we cleared the campfire zone of weeds, collected firewood and finally put out the fire leaving the zone safely. It’s nice to spend a day with a guy who is not only an expert on navigating the river but who also knows how to protect it as a valuable resource.

On our approach to the river, Simbo explained how retention dams like the one in St. Anthony regulate the flow of the river not only for irrigation but also to ensure the overall health of the river both above and below the spillway. 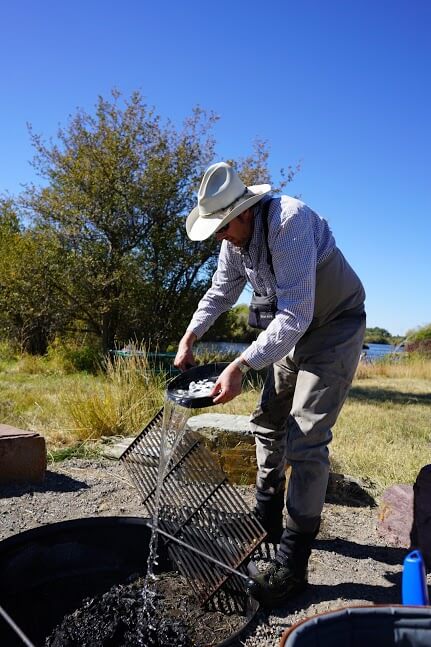 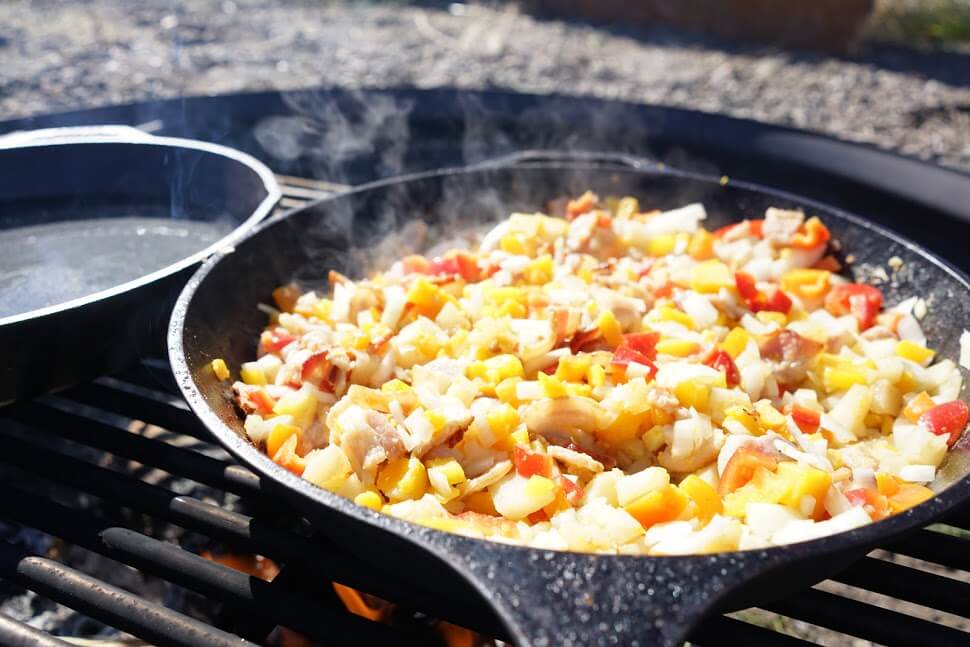 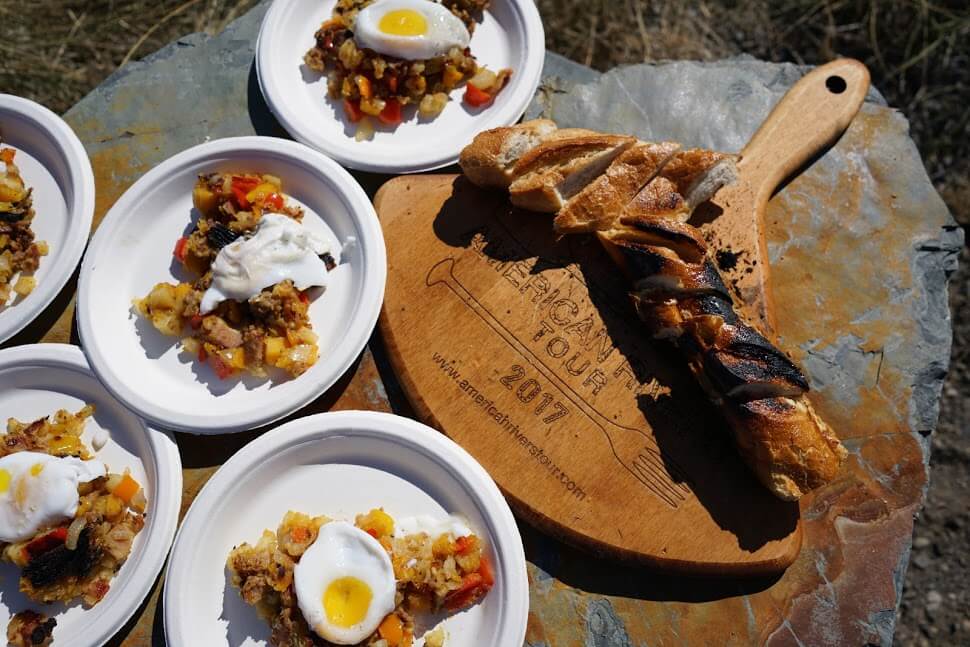 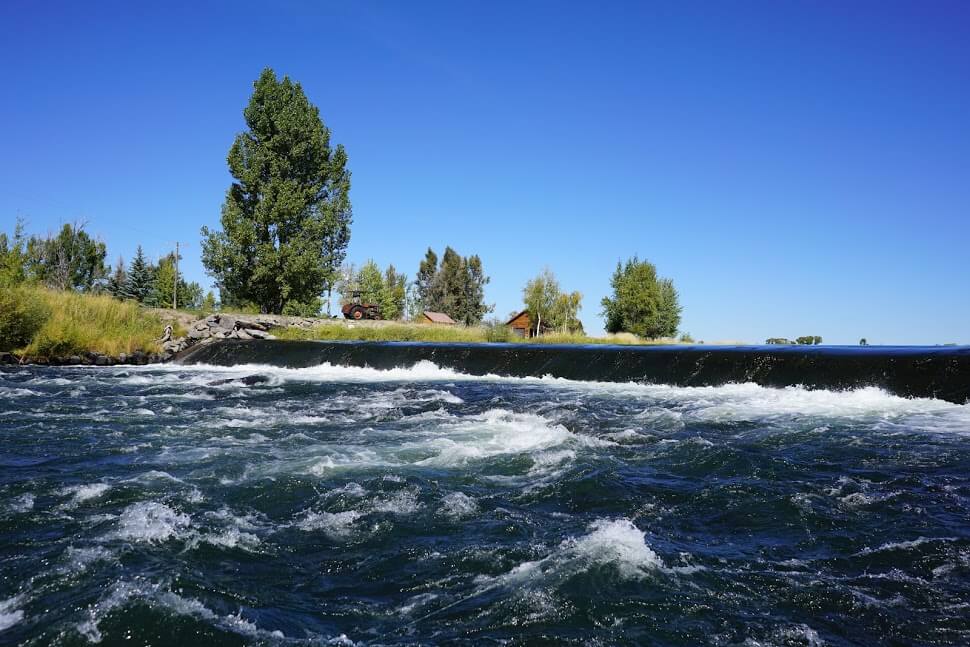 The Henry’s Fork Foundation works with the Idaho Departments of Agriculture, Energy and Fish & Game to help provide scientific data to monitor and control flows for optimal usage considering needs for all stakeholders. They employ a fascinating algorithm that are based on water levels in reservoirs and weather forecasting. In addition, it’s important that guides and fisherman respect the resource and return their catch to the river as permitted by local regulations.

Once on the river, the man with the most experience (Simbo) fishing the hopper/dropper setup showed his skills. While I stripped coffee sparkler streamers under the branches on the Henry’s Forks edges to little effect, Chris took several 16 inch Rainbow Trout out of the center of the river on size 16 & 18 PMDs (pale morning duns) with large purple hoppers floating like bobbers above. He also had success landing a 17 inch brown on a two bit hooker, red size 18. All of the Henry’s Fork trout were vibrant, strong and impressive especially as seen through my old friends ear to ear grin. Throughout the 5 hour float Simbo was catching fish while patiently floating the hopper/dropper while I was casting towards the shore to little success. 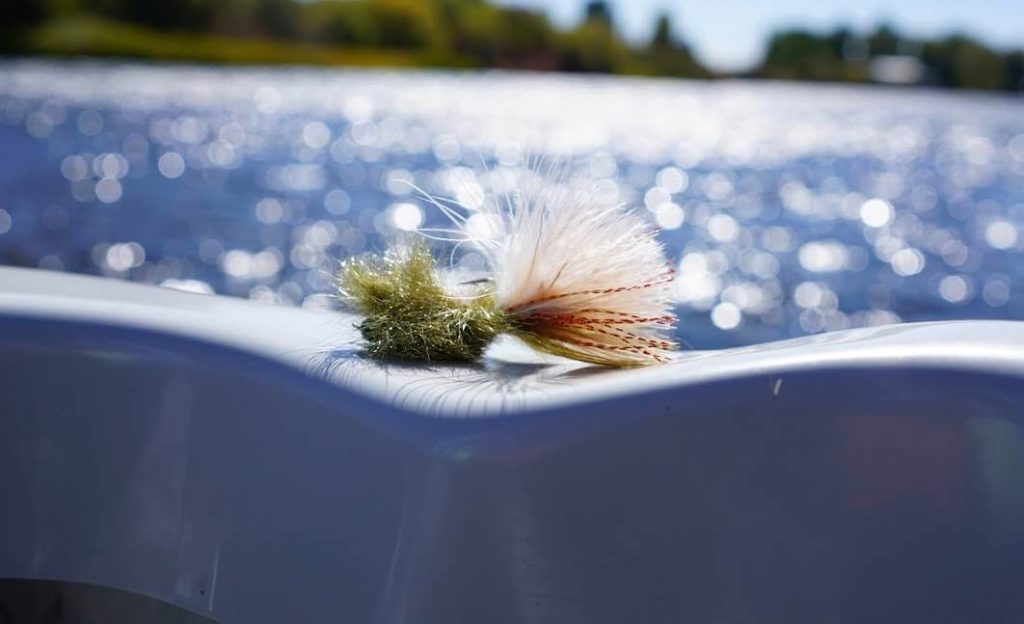 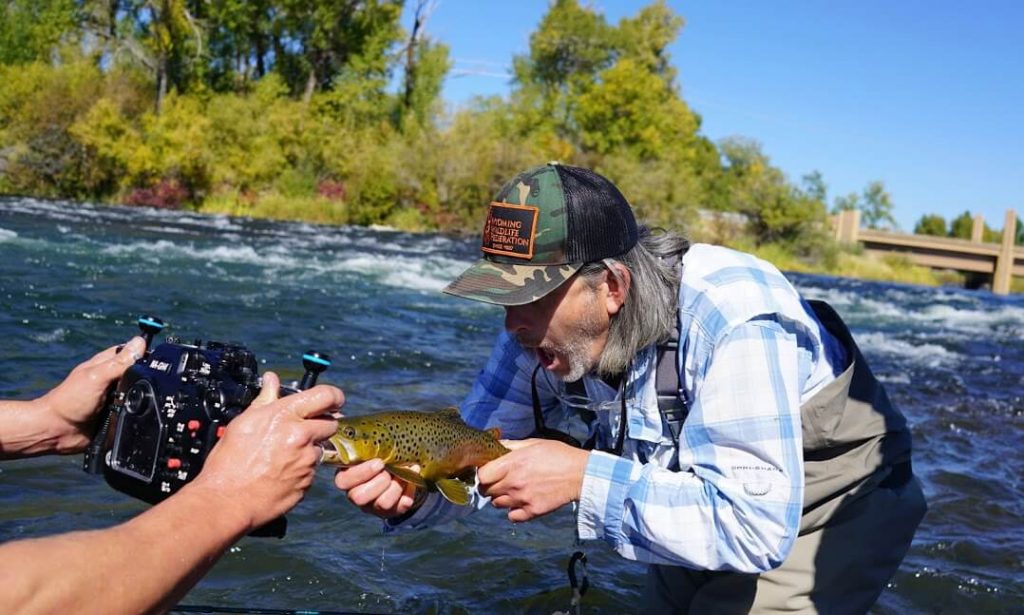 Dinner that night at the “Trout Hunter” was memorable. I enjoyed a large plate of Buffalo Chicken Wings and an excellent pork chop. The dining room is situated in the largest room on the back of the building with a huge picture window overlooking the river, a long bar occupies the south end of the room and the artwork on display shares a local perspective. Equally memorable was the crowd, as we sat on the raised table in the middle of the room surrounded by seasoned fellows at other tables, I felt a warmth and comfortable camaraderie with about 40 other fisherman that I don’t even know. This is clearly a destination that these people have worked hard to get to not only physically but financially and technically. As I looked around I imagined that some ere clearly local guides and residents who have settled in the Henry’s Fork Valley, but the real glow showed on the faces of the travelers who had come from afar to cast a fly in the famous waters of Henry’s Fork.

If any of these guys hadn’t spent half of their lives working on their casting, raising their families to earn their free time and saving their hard earned money to afford it, I don’t think it would feel the same. Like a special club, the men and woman in the “Trout Hunter” that night all dressed the part and it was a special day to sit with them in their high temple on the river of their dreams, the Henry’s Fork. 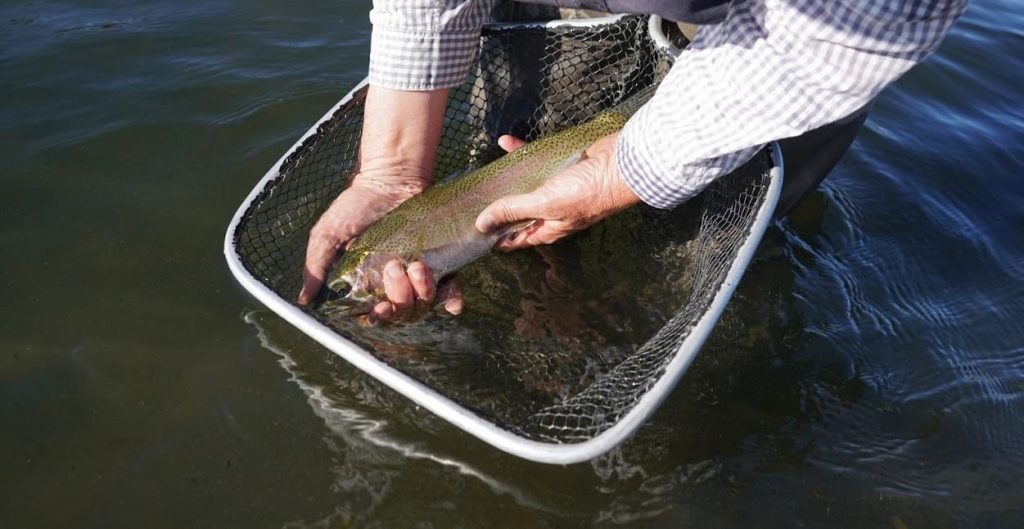 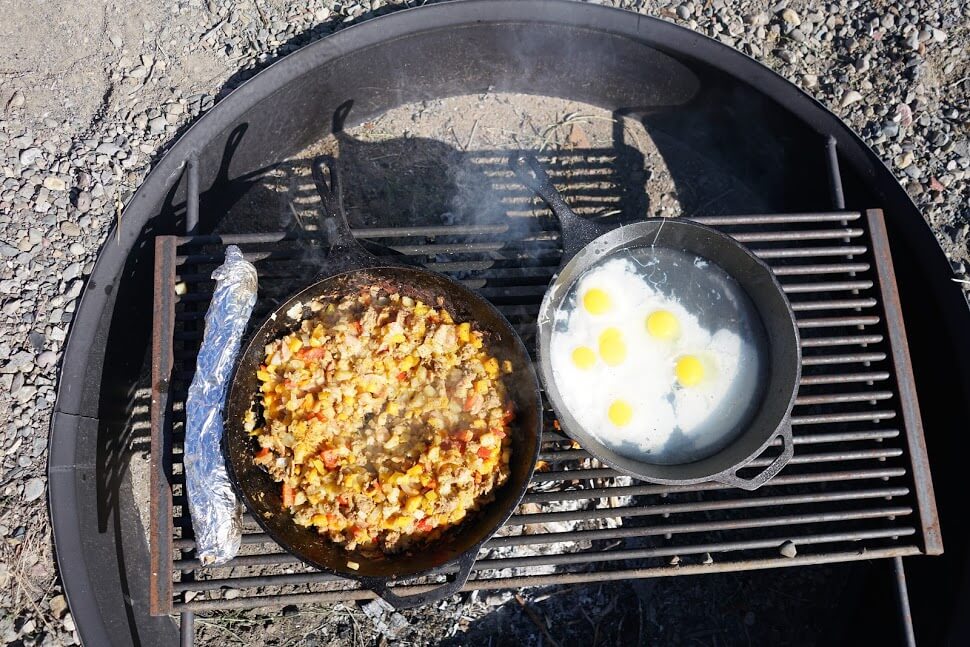 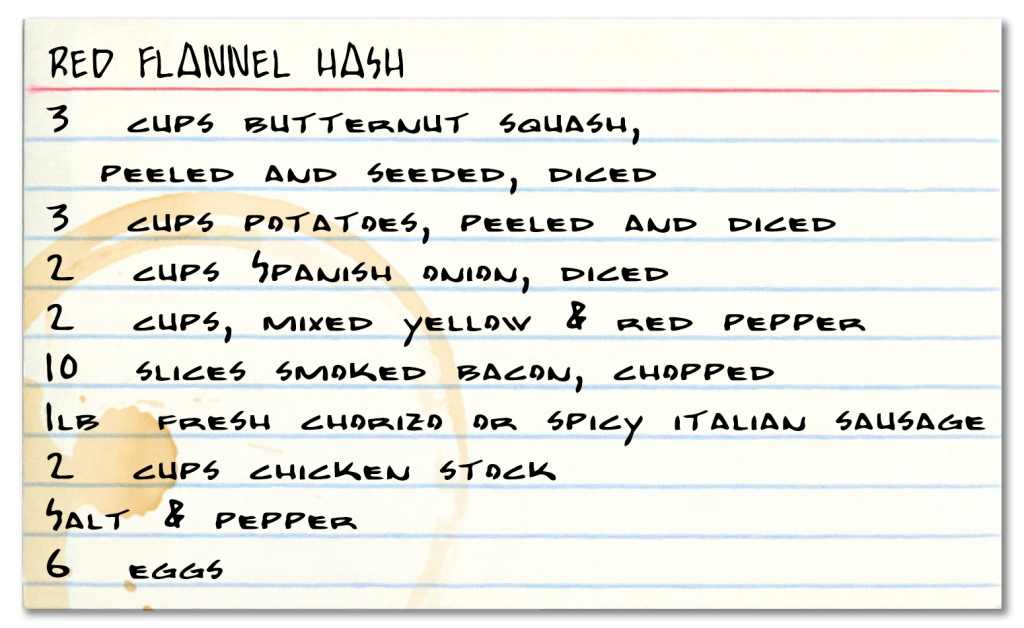