When we first boarded the mothership, Peter Dawkins mentioned the cautious reality that this trip was “going to fly by”. He said it would be “halfway over before we knew it and then we’d be getting back on the bus with our heads full of memories”. Peter had been on several trips like this in the past. He spoke from experience, I envied his son. To roam the world fly fishing for giant tarpon with your father is a dream few men see come true. No other angler on the boat smiled as wide as Peter did, of course that might have been because he landed an 80lb tarpon on Wednesday while fishing with Mike, the biggest catch of the trip.

Simbo and I spent our last day together with Osyani. Still riding the high of his 25lb Permit my friend C.L. was also smiling and relaxed from success on the flats. We had a perfect day, light wind broke the surface. A cold front was moving in, the weather was shifting but not too quickly. He wore a Grateful Dead tie-dye and shared cigarettes with the guide at lunch. I’d packed a vegan box with boiled potatoes & onions, a salad of chopped lettuce, red peppers, green olives and tomatoes. By this point I’d had my fill of rice and beans.

The flats had just enough breeze on them to break any view of moving fish, Osyani reminded me to look for nervous water. By this time I understood the word coming through his thick Cuban accent, nervous water doesn’t just roll off his tongue in a sound that I’m accustomed to. It’s a sound you want to hear while polling the flats with any guide because it suggests moving fish are breaking the normal rhythm of surface water.
Each time he said “nervous water” our antennas went up, our heads would turn to the direction and distance the guide would call and he would share the detection of moving Permit, tarpon and bonefish. In the case of Permit, the nervous water would almost always be on the move in open water. 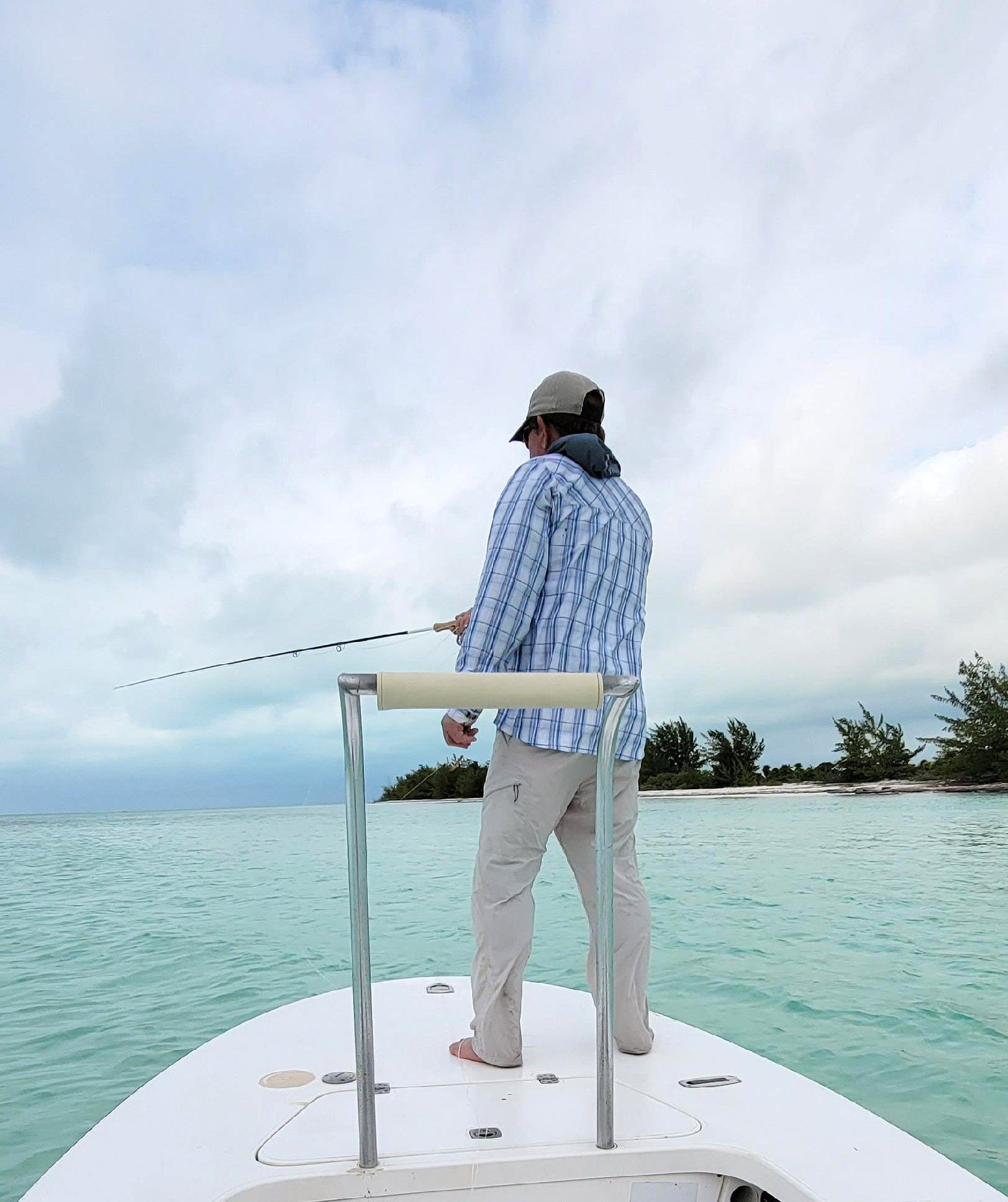 Heading back to the mothership, now anchored in the same channel that we started out of on Day #1, Osyani took us back to the “Taco stand” where we’d started our adventure 6 days earlier. There was a heron, fishing on the same point that a bird of the same size had stood on our first outing. We approached the beach from the middle of the channel first, casting the big, purple peanut butter fly at the water’s edge into shallows stripping the fly out slowly to the channel’s deeper water, no tarpo. Then we settled the skiff on the shore, stepped off and waded, working casts high into the air on the back cast to avoid snagging the trees. Again no luck, no tarpo. Finally, we switched to a sinking line and the same big peanut butter fly, over deeper water from the skiff in the middle of the channel. It was a beautiful day, no tarpo, no problem. 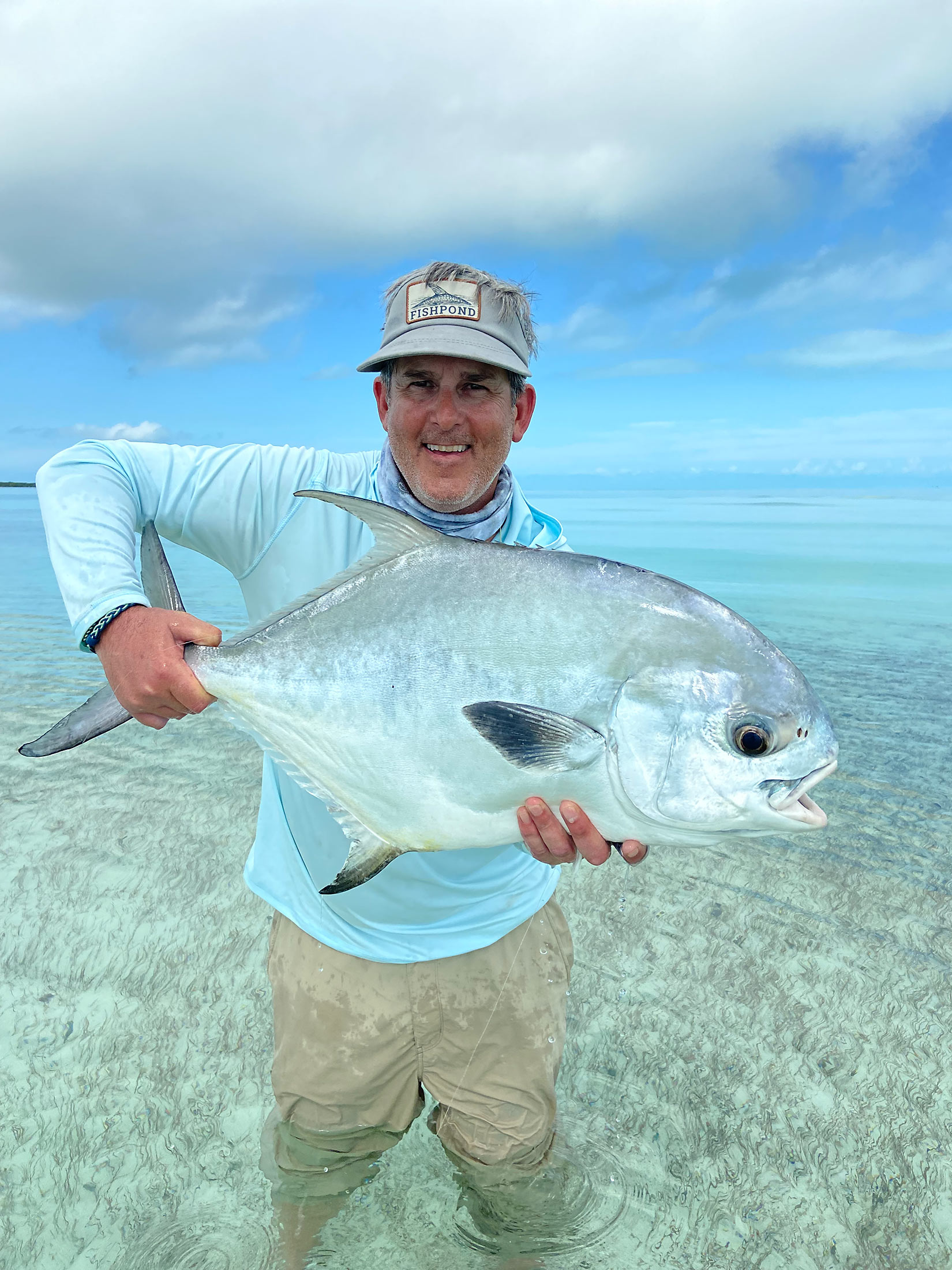 We caught bonefish all morning and switched to Permit hunting on the long shallow flats in the afternoon. As the skiff moved on Osyani’s rhythm working the pole slowly from left to right Simbo spotted a few Permit, several large sharks and a few bones but not a cast was launched from the bow all afternoon. No Permit or tarpon to report when we returned to the ship on the last day. Peter was right, we had memories to last a lifetime, my favorite might be that Simbo caught the biggest and only Permit with a capital P on the trip. 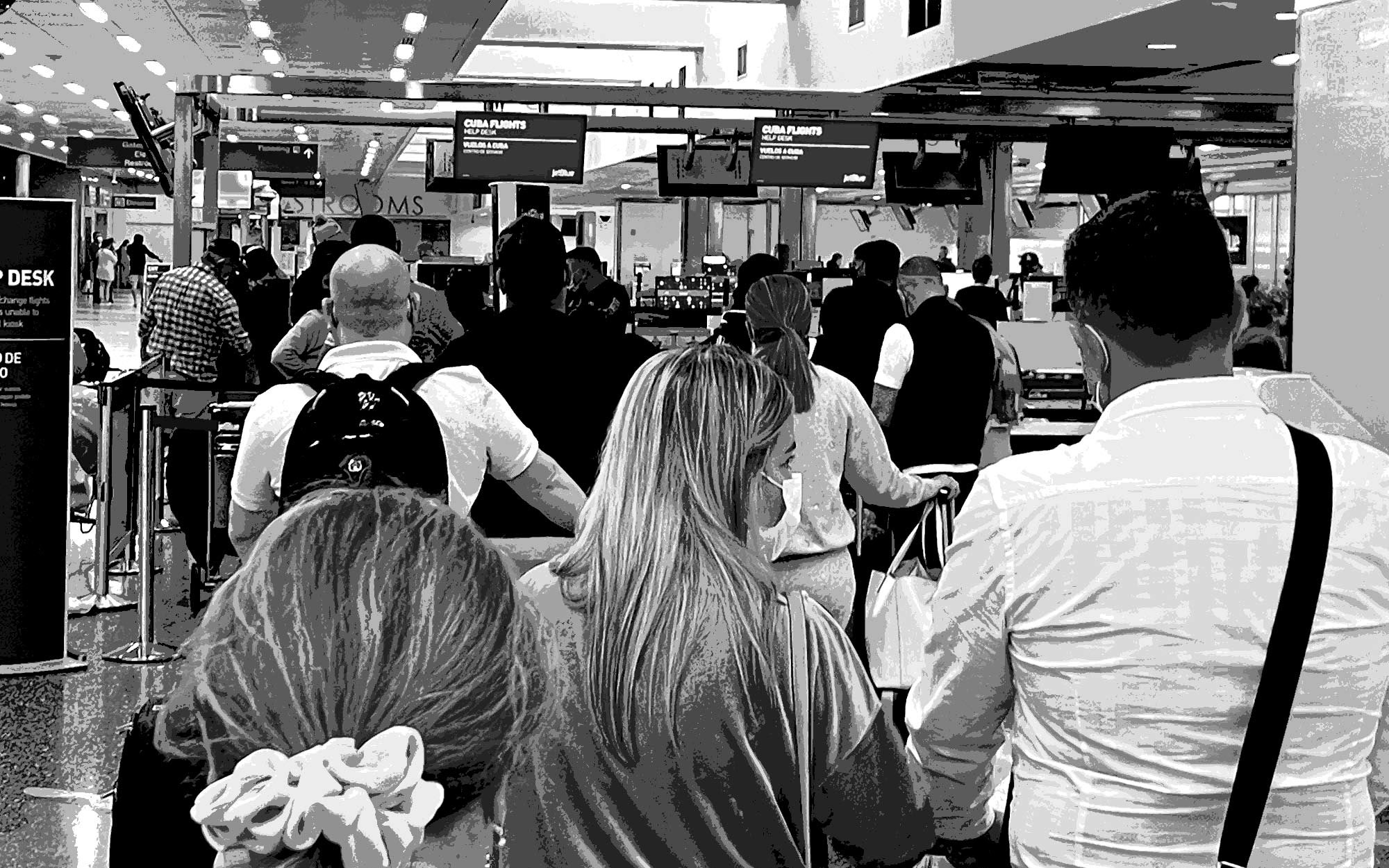 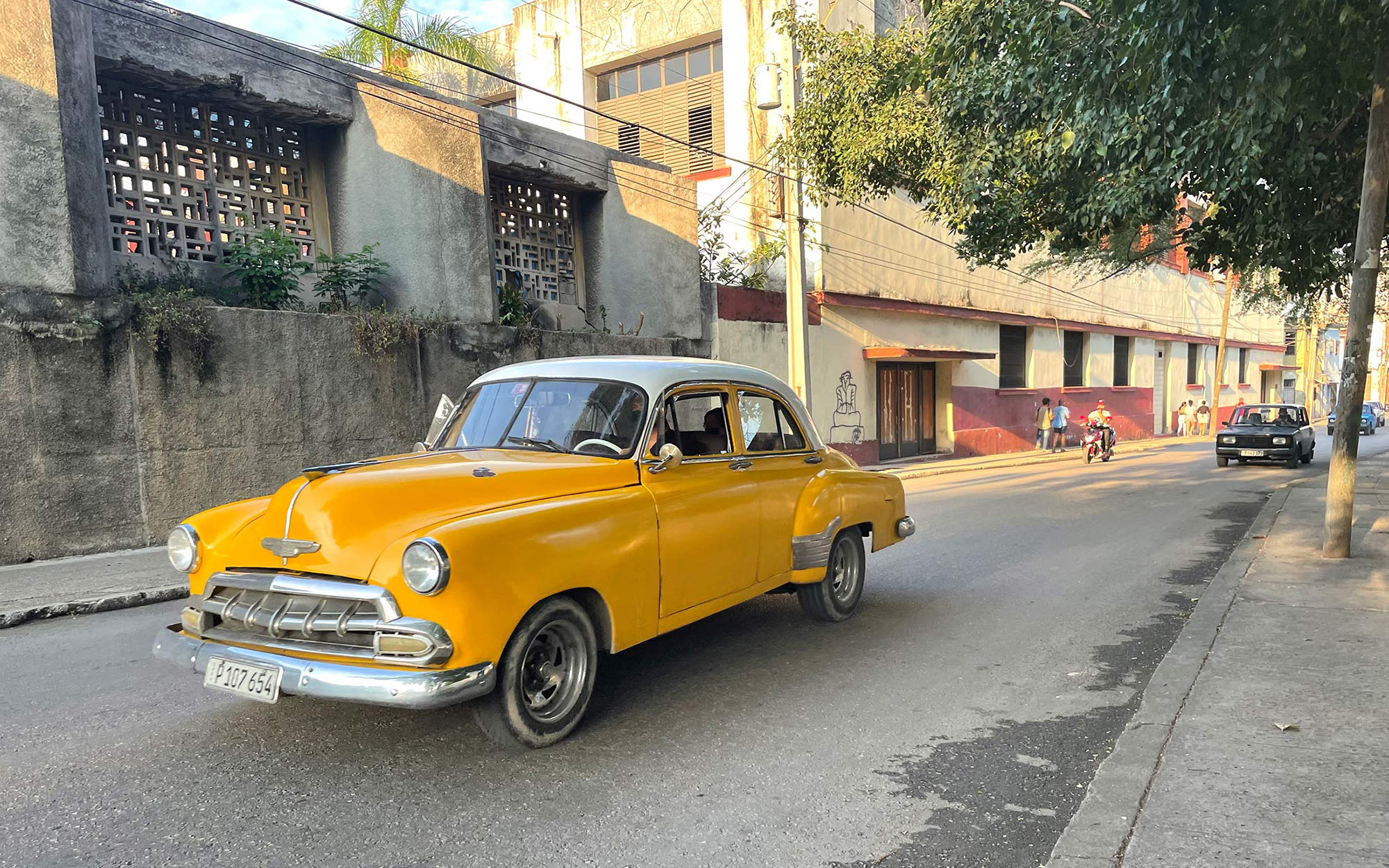 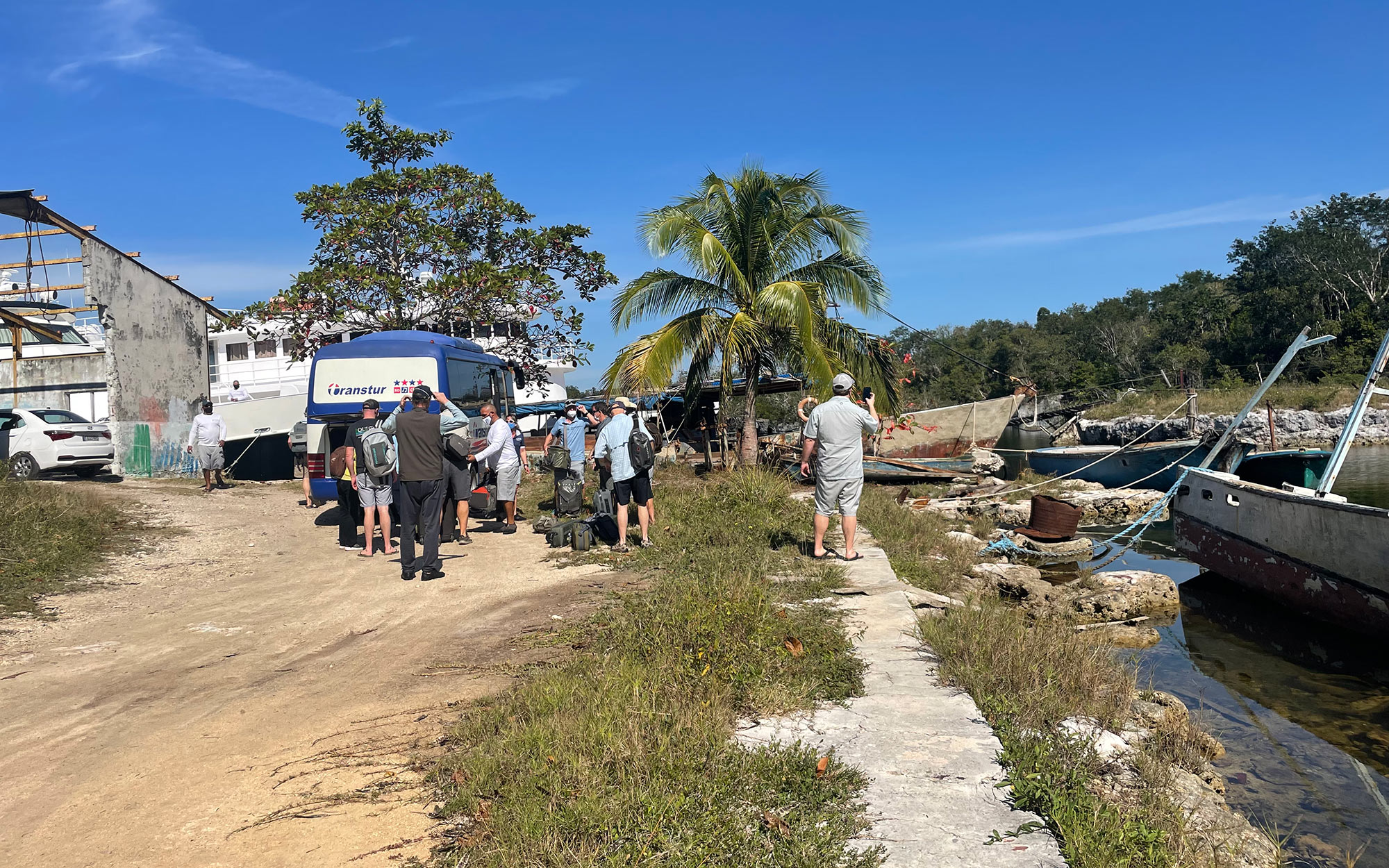 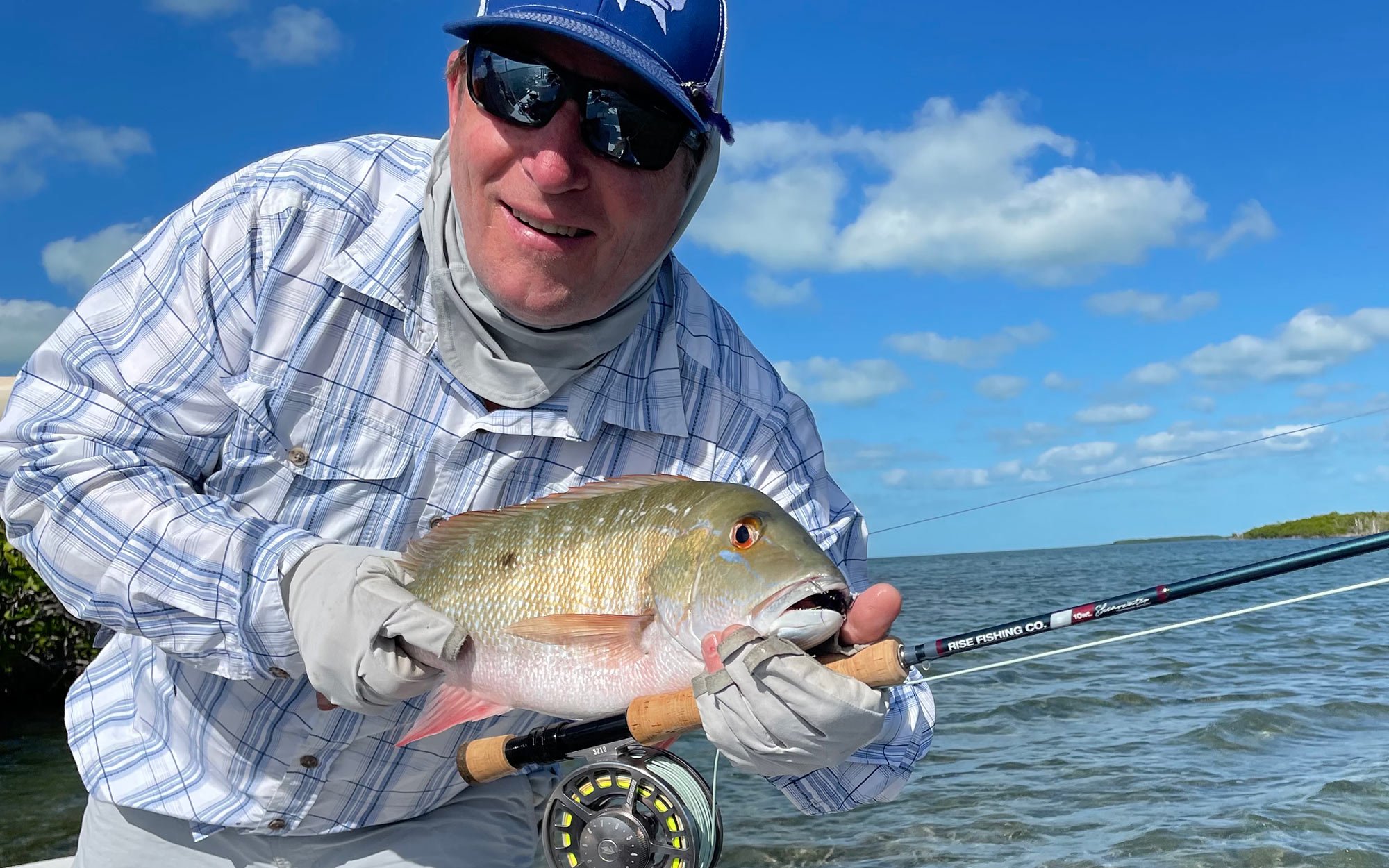 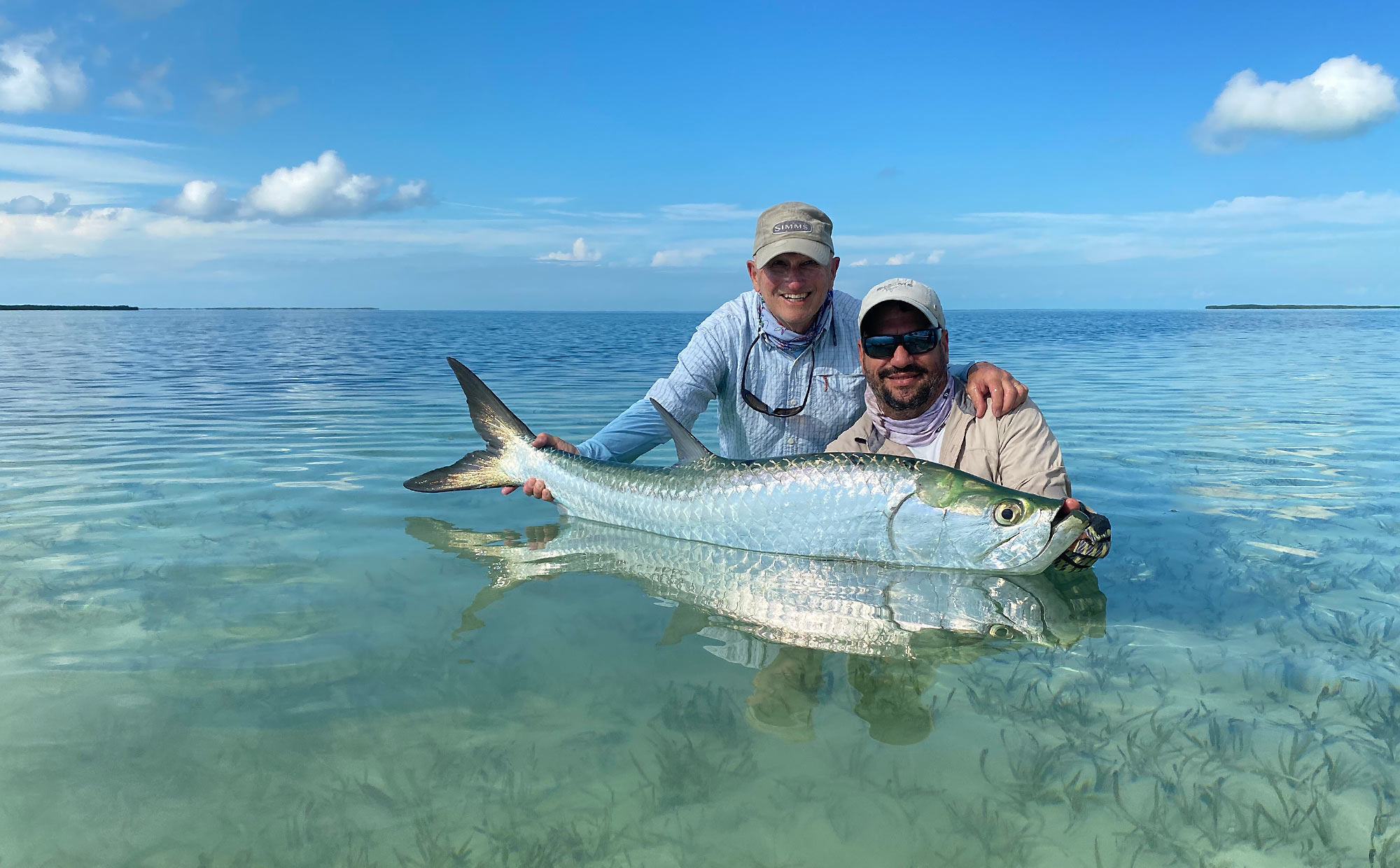 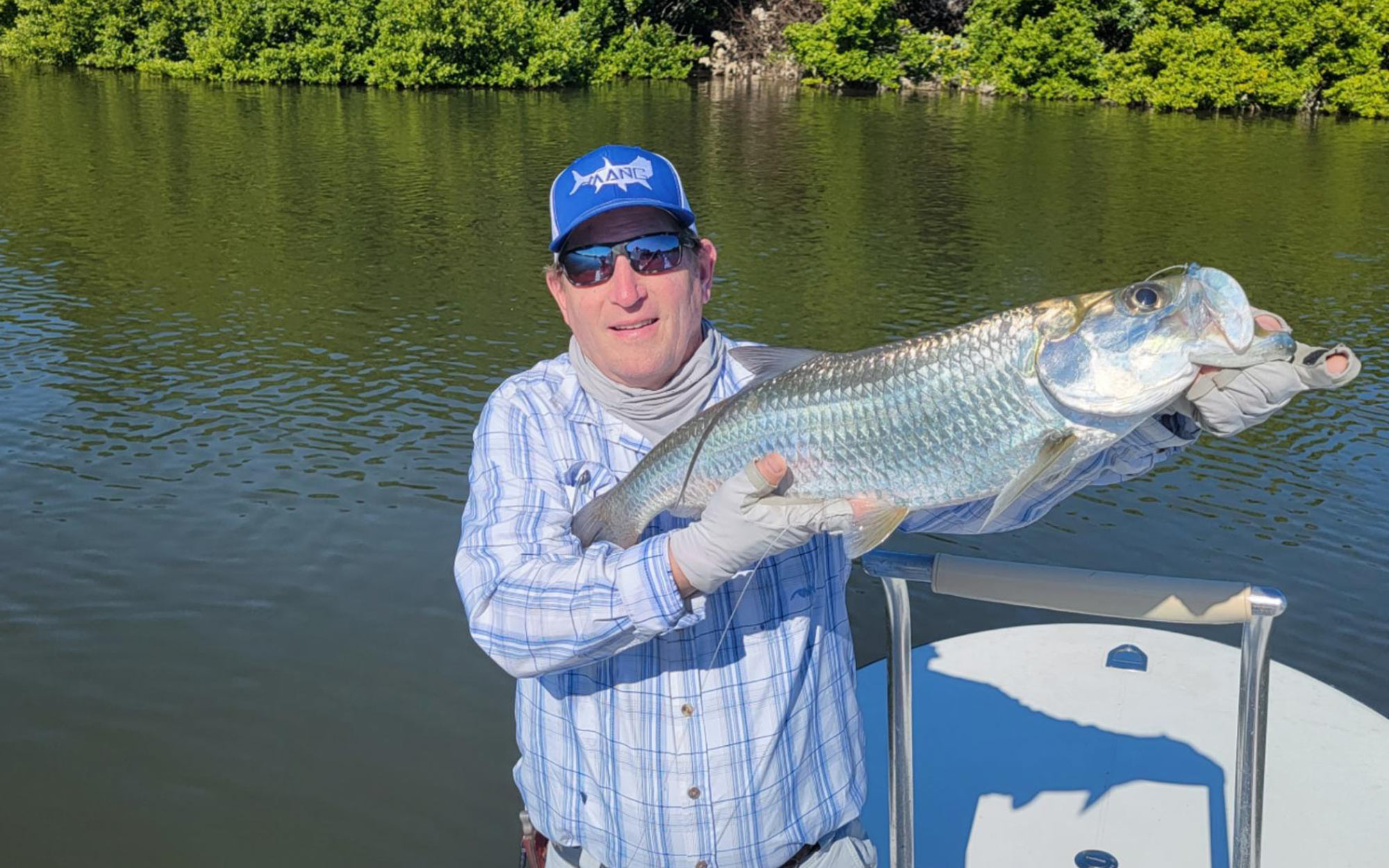 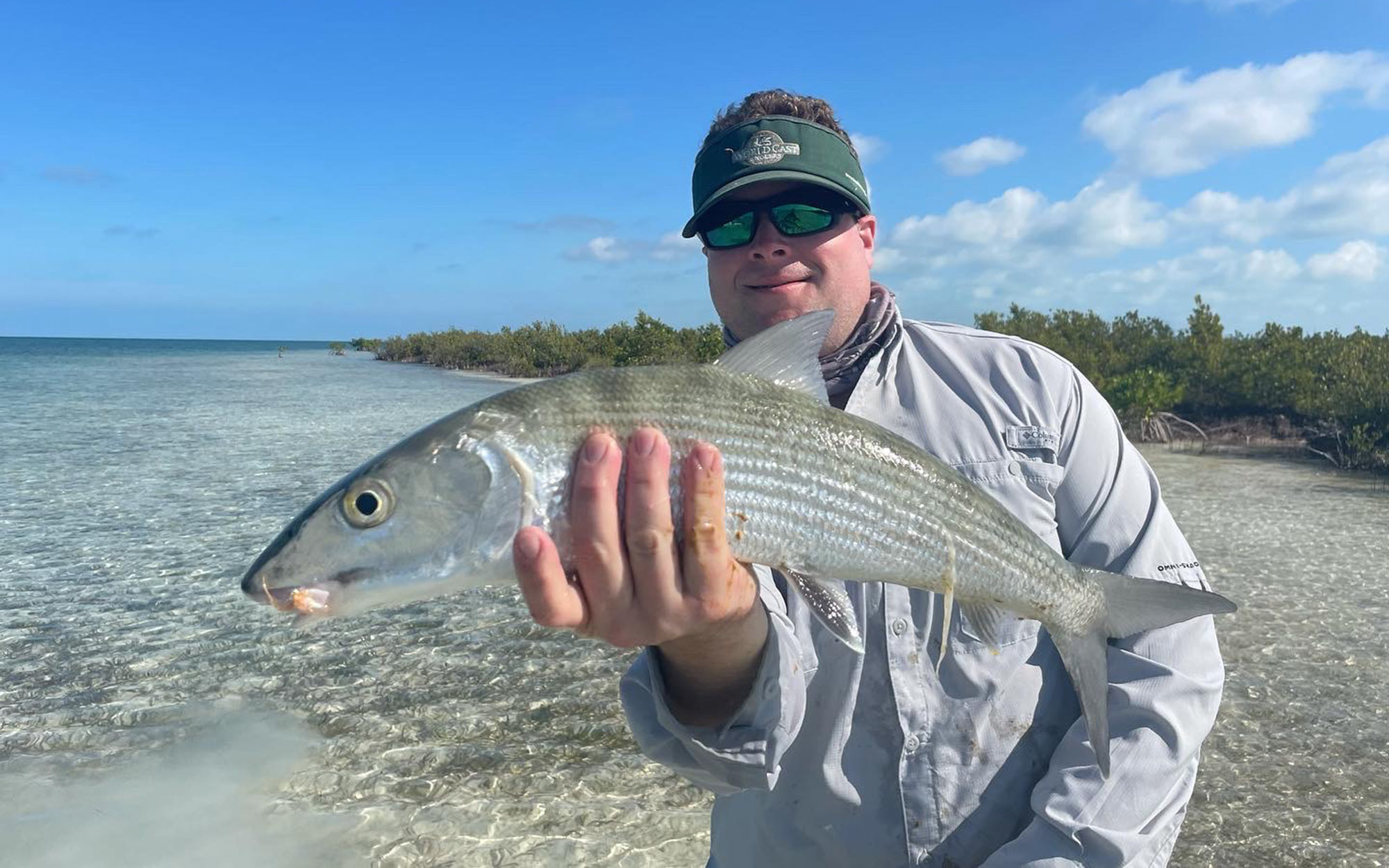 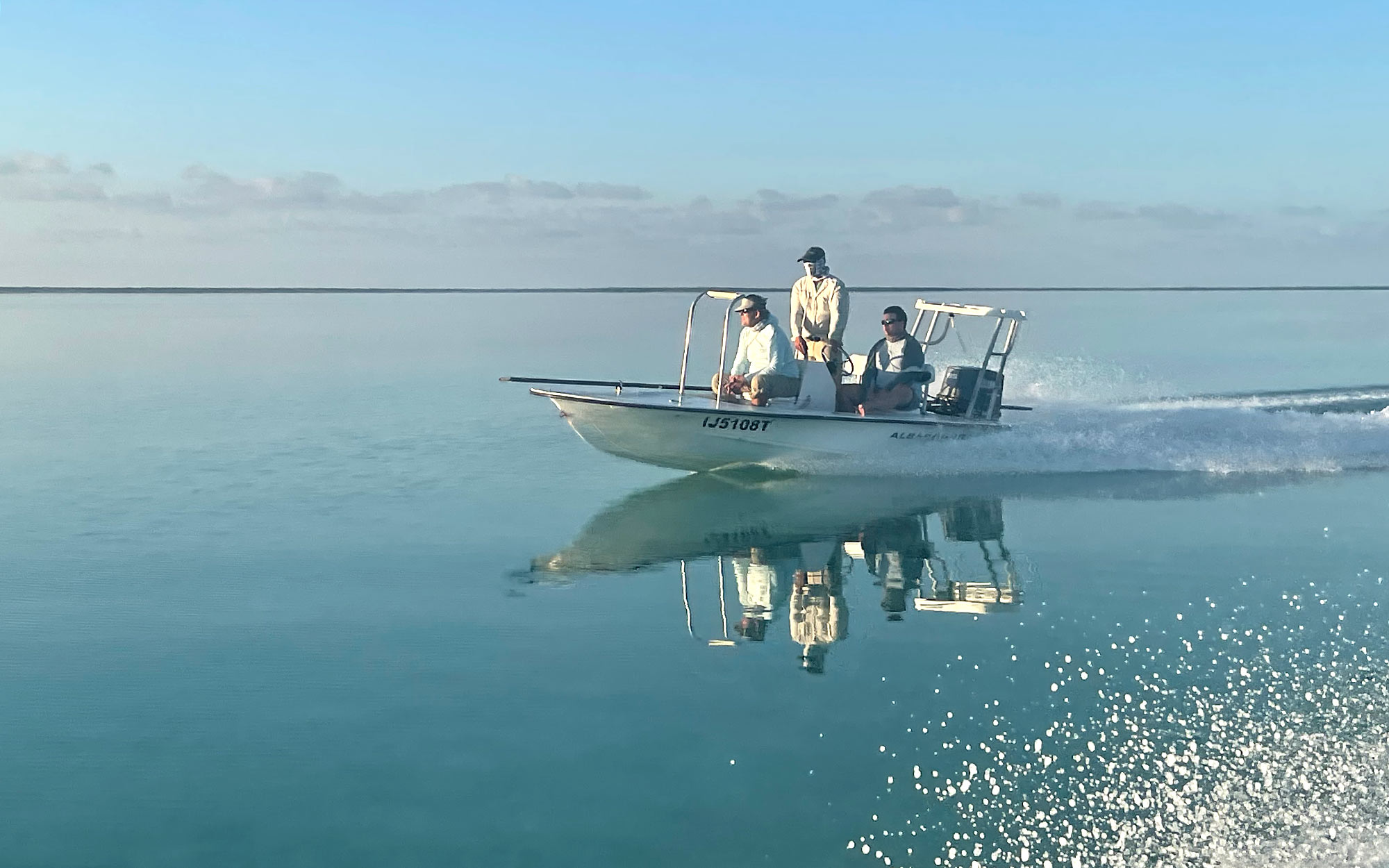 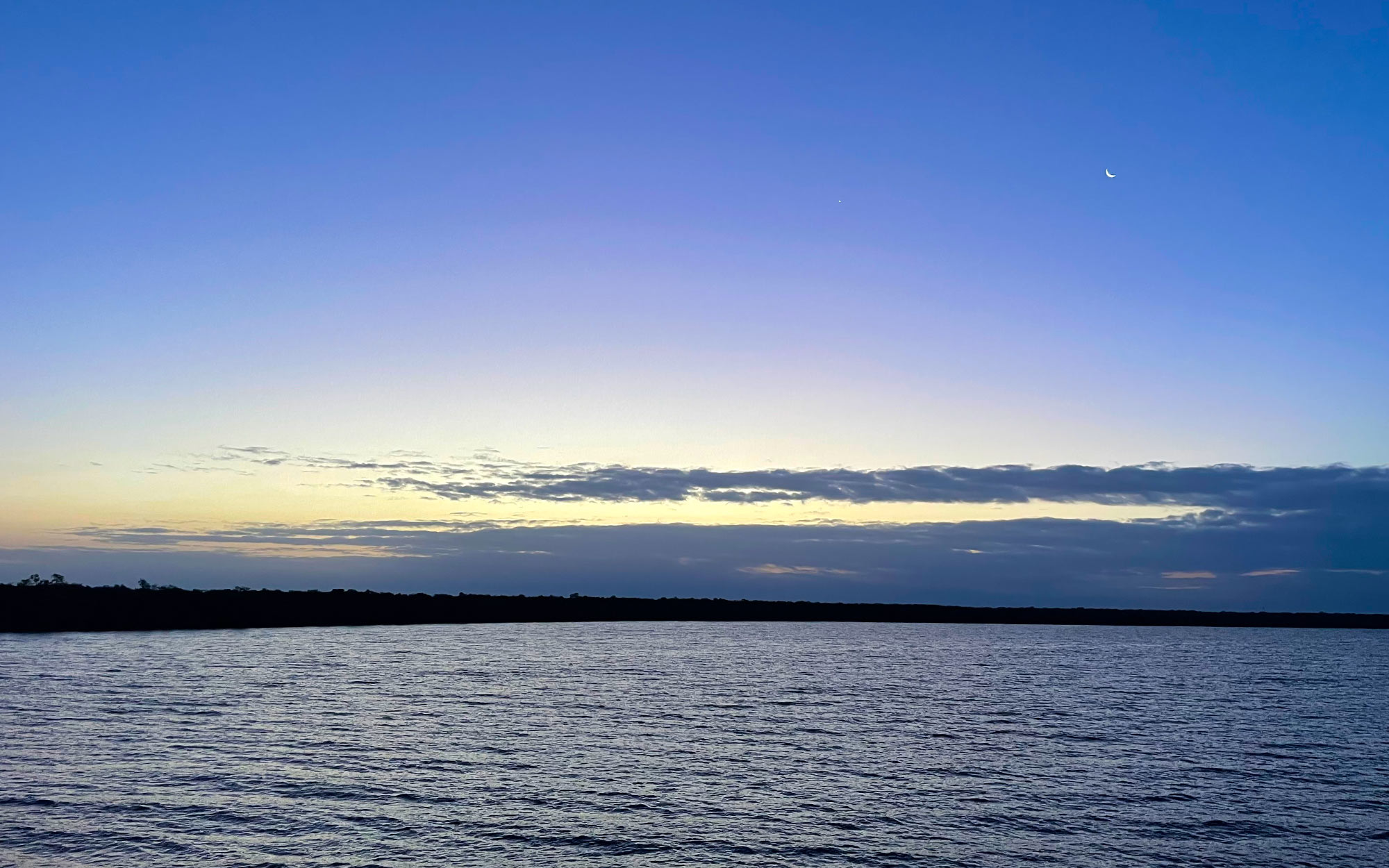 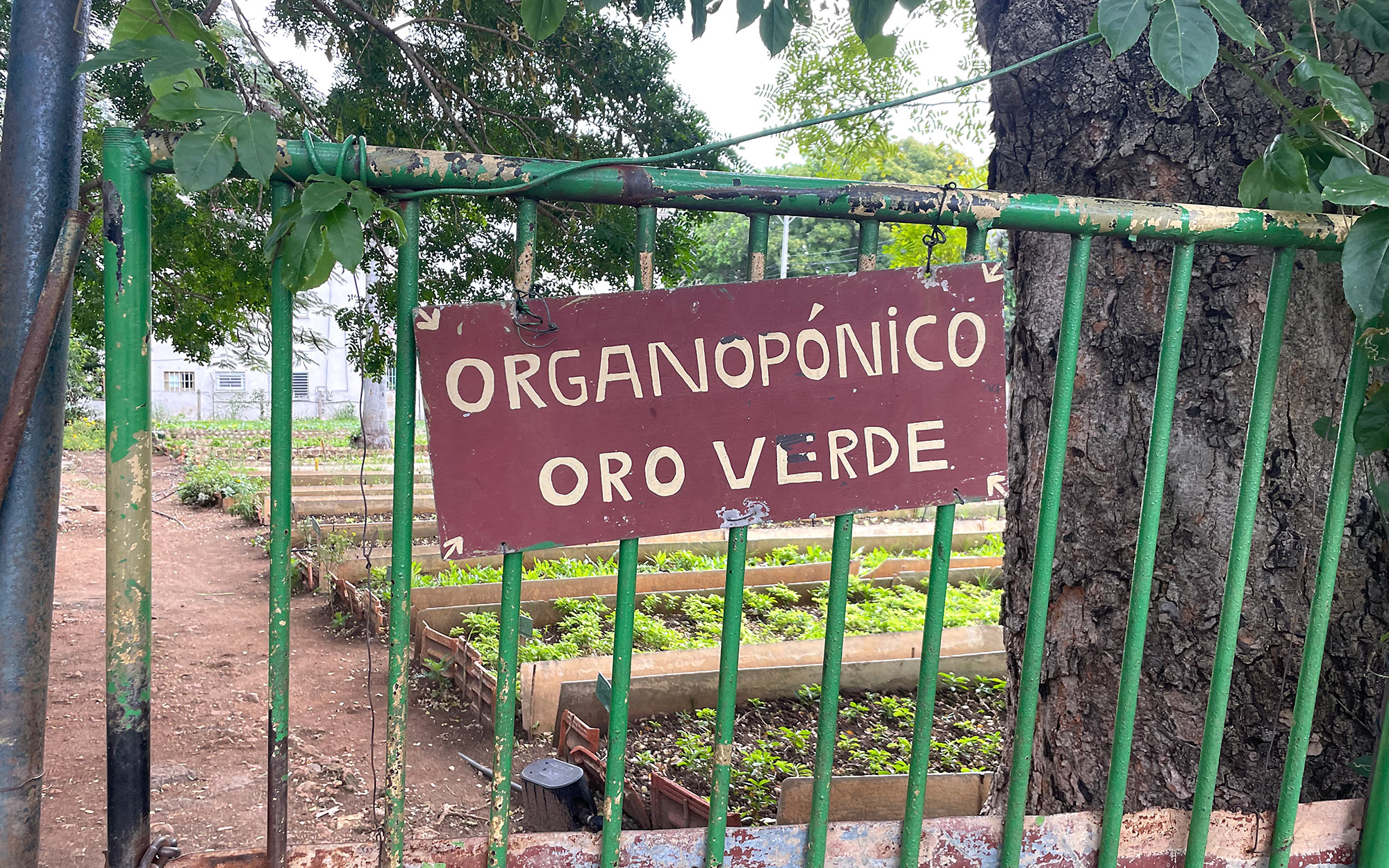