Chagrin Falls, Ohio is old school, right down to the brick roads that wind though some of the more established parts of town. “There used to be more of them, all over the place” I’m told by the large, bearded, fly fishing bartender Mick, at Grove Hill Restaurant in the center of town. I’ve come to Chagrin Falls to spend a day on the river with Tim Bando, chef and restaurateur. We’re cut from the same cloth, and of course his head bartender is going to tag along too. This is Bando’s hometown and he’s invited me to here to spend a day on the Chagrin river fly casting for steelhead. 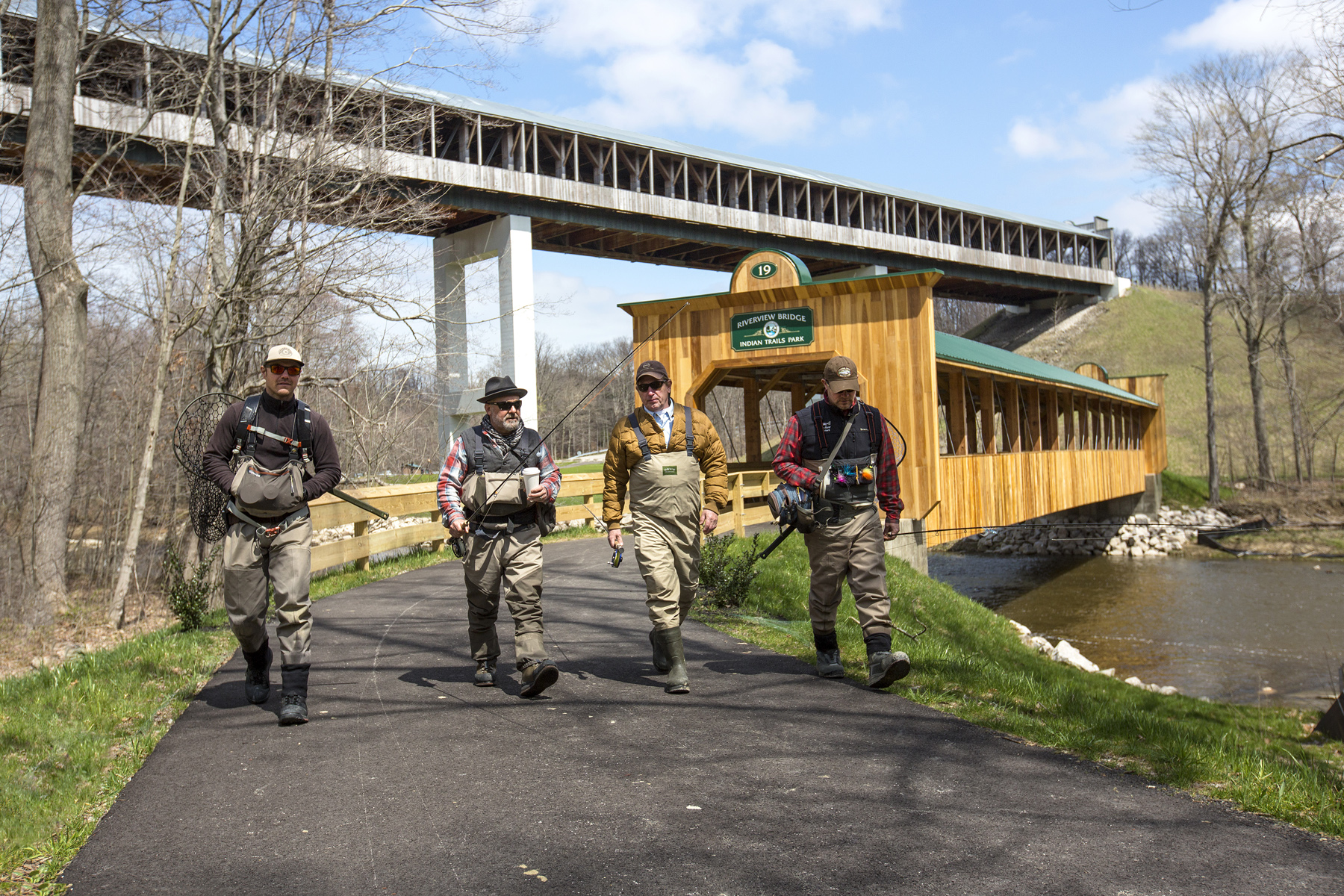 We’ve planned a trip with the Chagrin River Guide service head man, owner Dan Pribanic, a local with over 15 years of service to steelhead maniacs, smallmouth enthusiasts and trout fishermen alike. Dan covers a lot of ground serving his clients, guiding from Sandusky, Ohio, Pribanic’s home town on the shores of lake Erie about 40 miles west of Chagrin, all the way to the Pennsylvania line and beyond.

Fishing in Chagrin Falls is like fishing in your grandfather’s back yard, only the fish you catch are bigger and they run like a bullet at the end of your line. Large attractive homes, that look like they’ve been there for centuries, line the banks of the Chagrin river. Often times labs and goldens skirt the river’s edge greeting fly casters  with a bark and a pant. 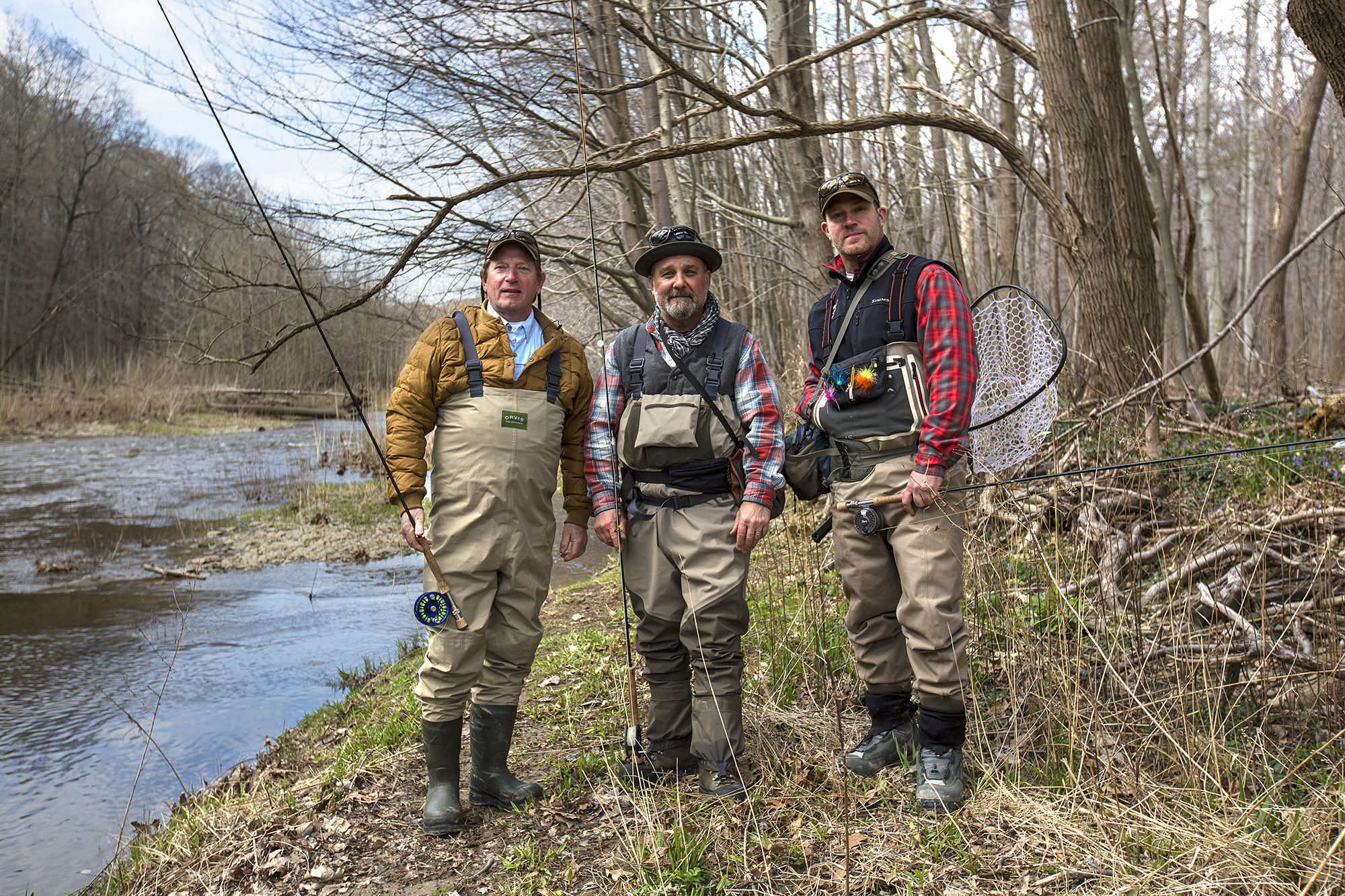 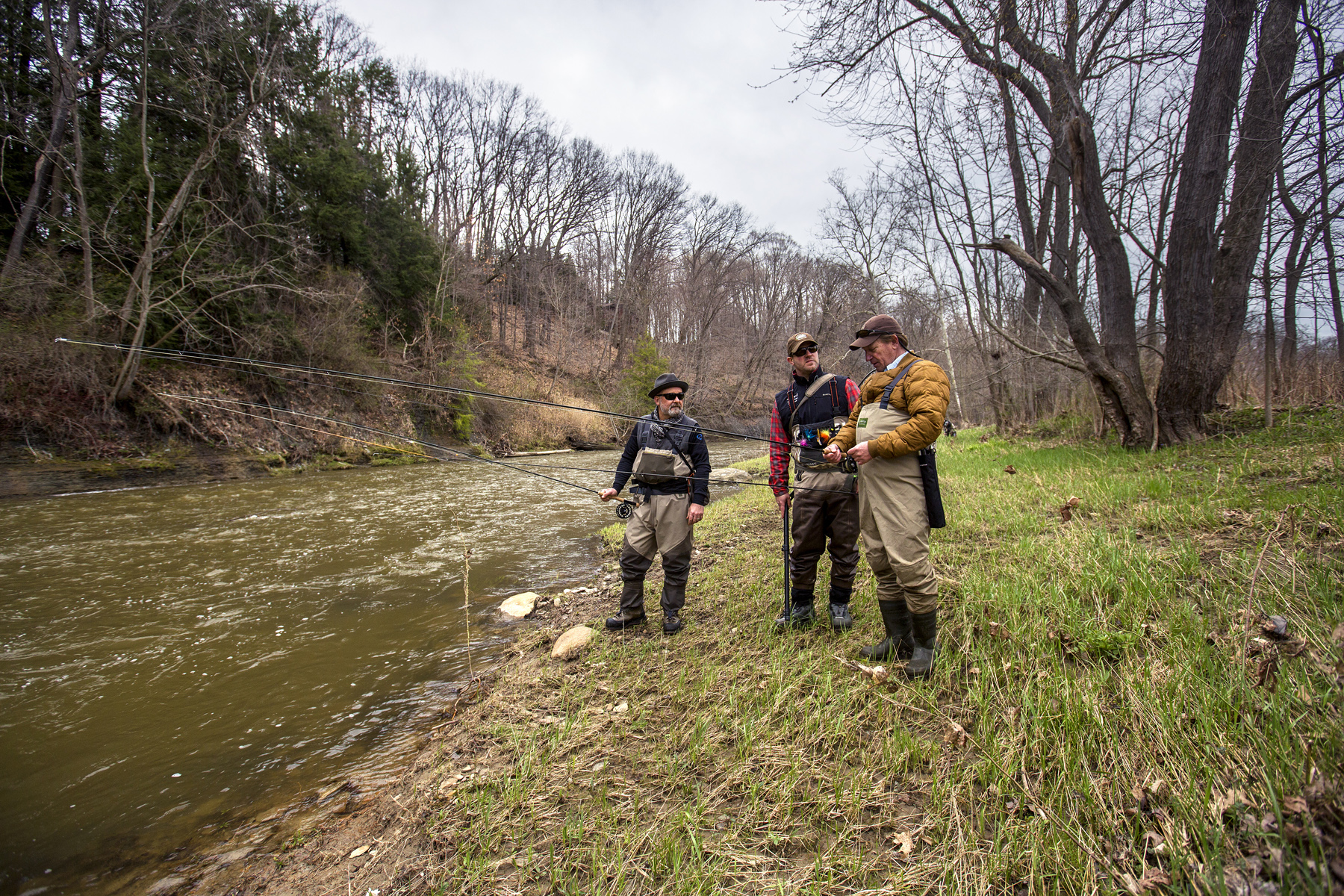 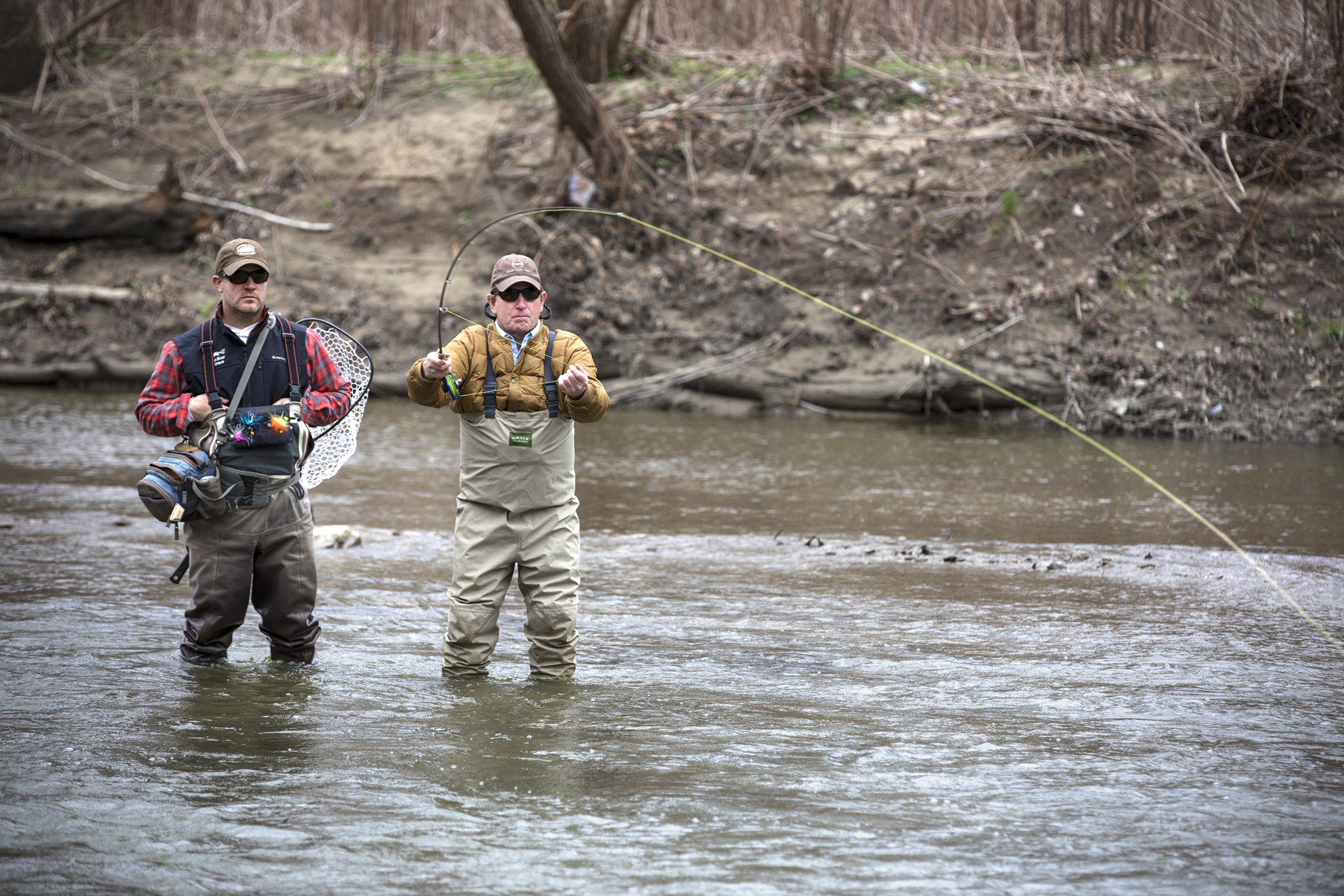 Steelhead come up from the deepest spots in lake Erie to spawn in Northeastern Ohio rivers in the spring. The “fresh fish”, those who have just entered the river, are sharp and brightly colored like silver torpedoes. Other fish, after a few weeks in the river, have a darker color and are often beat up from the constant movement in shallow water, swimming over rocks and rapids as they make their way to the spawning ground.

For Chef Bando, getting out on the river is his chance to relax and spend quiet time alone – hosting me changed that on this particular day. The water is cold on the Chagrin in April, the trees still brown and lonely. But then, walking through the woods from one stretch of river to the next,  we came across a forest and it became clear that spring was just around the corner as we discovered the lush green and purple floor lined with an edible treasure: ramps. Bando was quick to grab a few from the roots for our “Hobo Skillet” lunch later on that day. 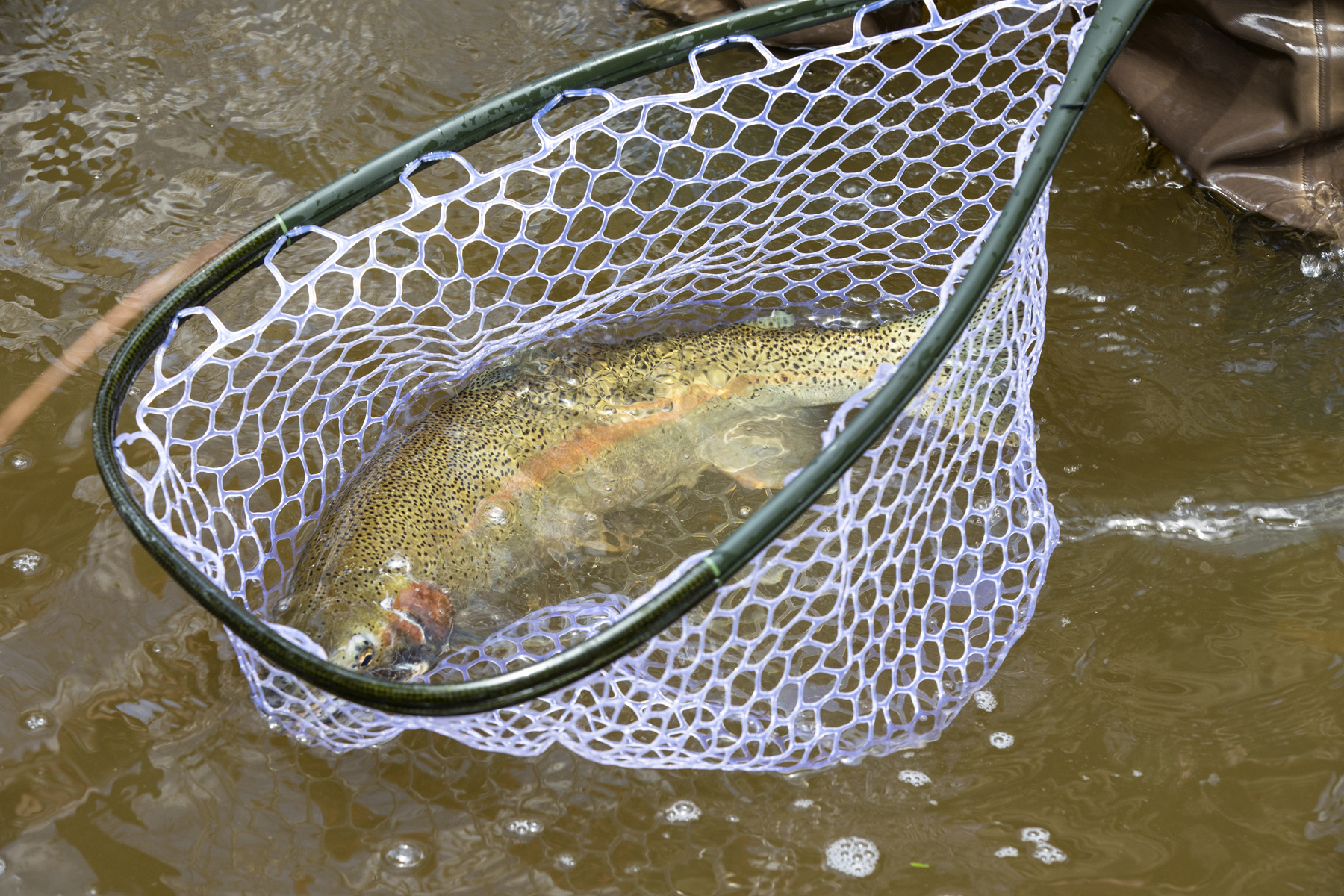 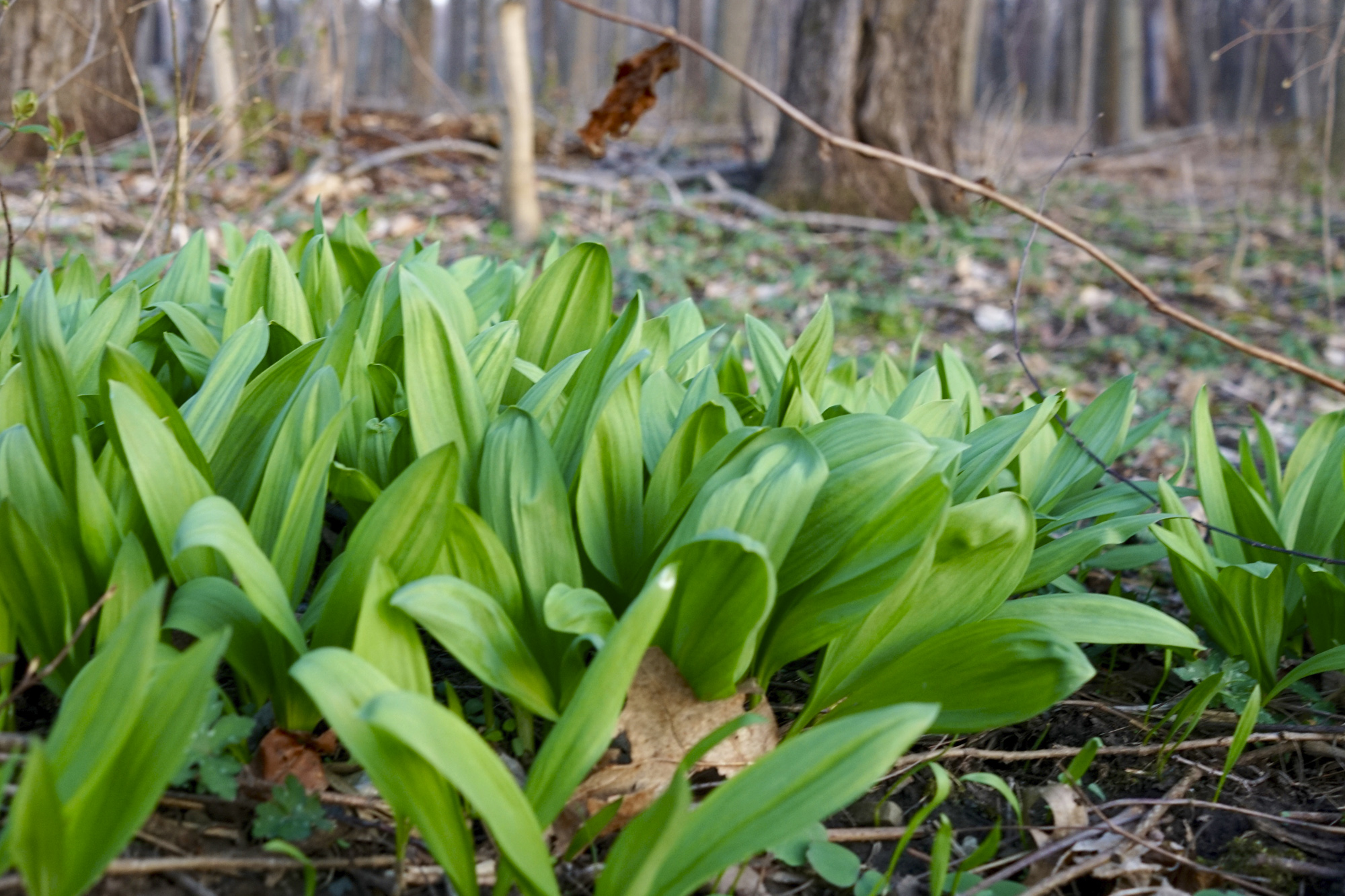 Fishing a nymph ( a small fly imitating caddis larva) below an indicator ( a small floating orb, acting as a float to keep the nymph floating in the river, off the bottom), the river’s flow does much of the work. As the current garbs the fly it floats rapidly down stream, the strike ( fish attacking the fly)  often comes just as the line tightens and the nymph begins to swing across the current.  With a dip of the orange float and a set of the hook, the river explodes into action. Fish on, silver slashes, tail walking steelhead fight for freedom and then, just in time, our guide Dan steps in with the net to secure the fish safely for a quick release.

When I first called Bando to discuss a walleye trip he laughed at the other end of the line.

In Northeastern Ohio, he responded I fish for steelhead, “walleye are in the lake but I like the action on the river”. He went on to explain that the steelhead run starts in late fall and they’re in the rivers all winter, but the best time to visit is in April and early May, that’s when the rivers are full of big fish moving to and from the spawning beds then heading back to the lake. While they don’t eat during the spawning run up river they are quick to hit anything that might be interfering with the spawning beds, especially the aggressive 3 and 4 year old males. 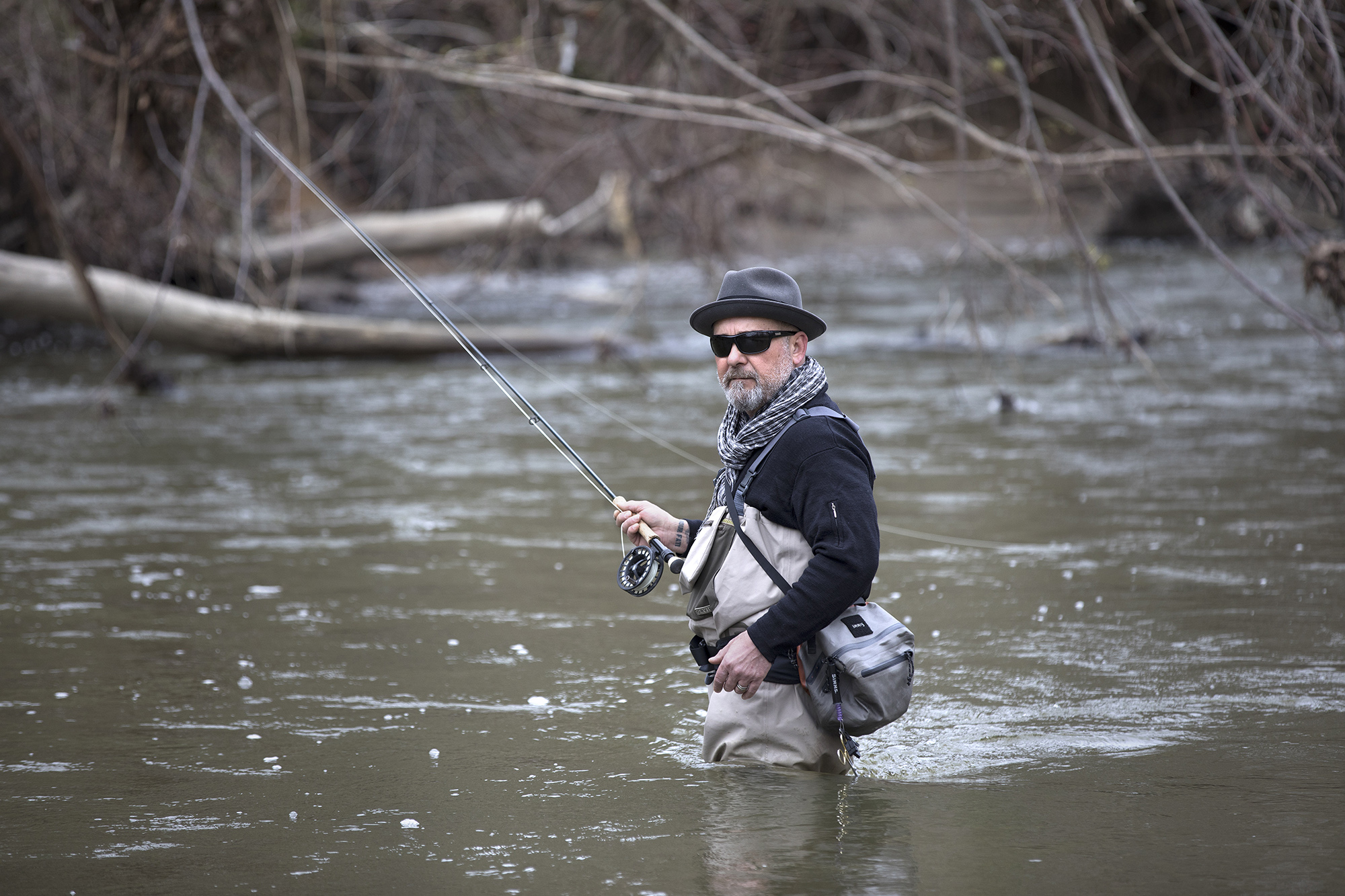 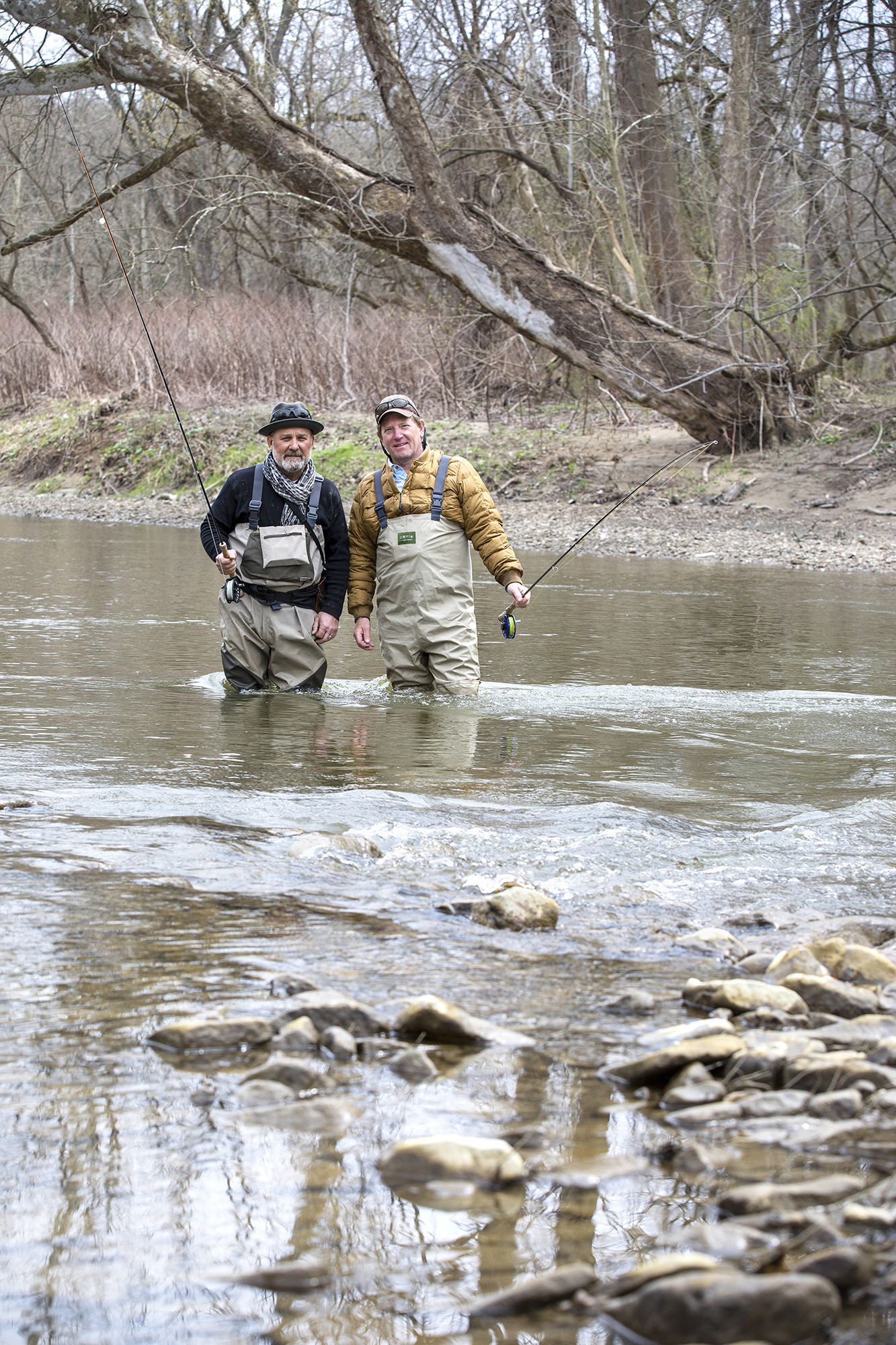 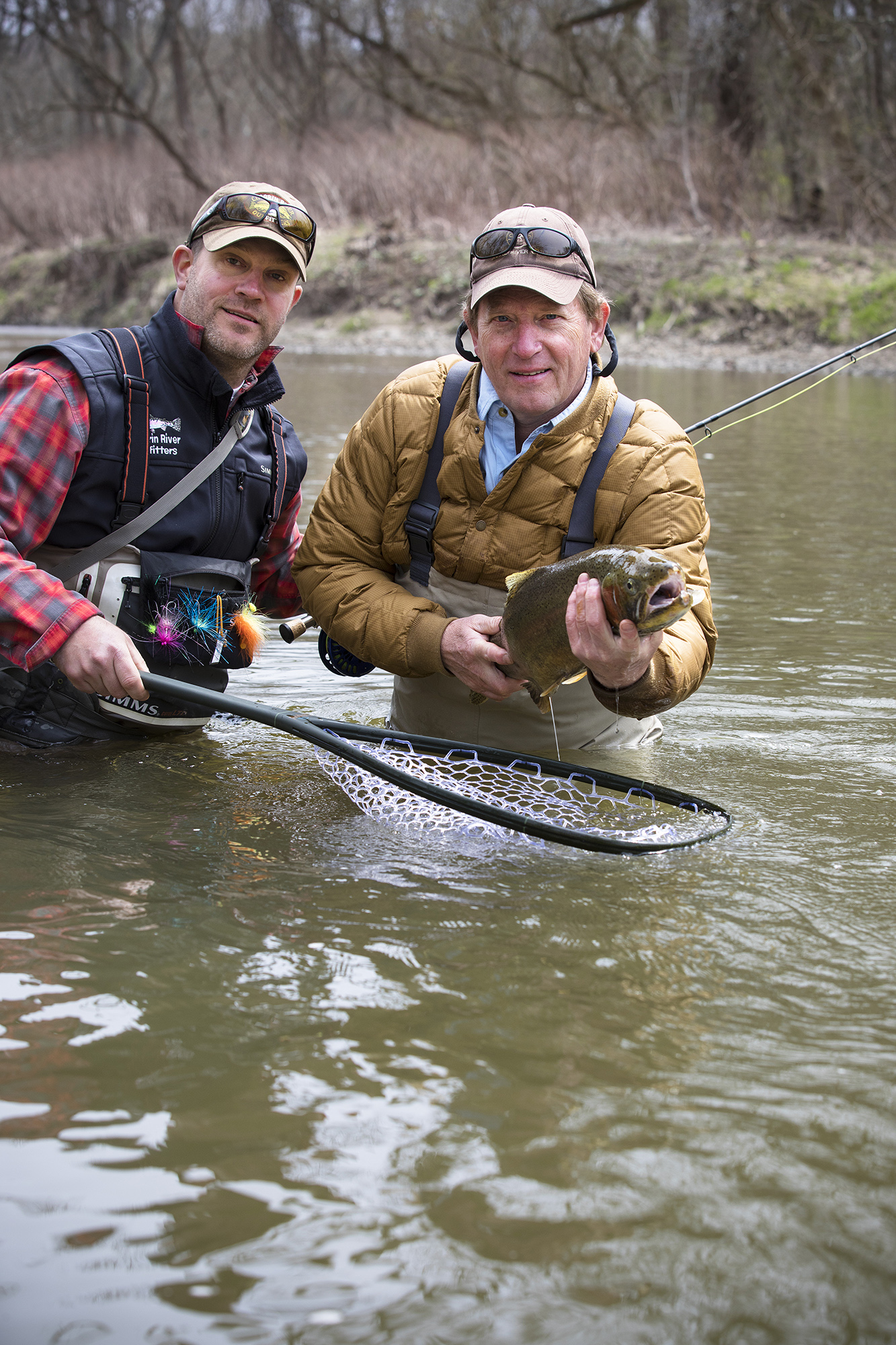 Our day on the river was an adventure, Mick the barman was quick to hook up early. Then Bando had a fish on, and another soon after that, all in knee deep water. Fish running up and down the river, pulling Tim from one bank to the other, over bushes and through the current until finally he landed a 28 inch fish, twenty yards down river.

At the end of the day, as we sparked our campfire at the river’s edge, Tim became more animated on the topic of food.   He shared his culinary background including his time in small Cleveland kitchens with Michael Symon and his days as a corporate chef in Chicago under the great leader Richard Melman and then his time running The Meeting House kitchen across from my first restaurant in Amagansett NY. Today, Bando calls his own shots as the chef and owner at Grove Hill. He chose the make us Braised Lamb “Hobo Skillets”  because he knew that doing the work at the end of the shift the night before would set up for an excellent, easy to prepare hot lunch on the side of the river. As he cooked his voice lifted and a smile came to his face. It’s clear that regardless of where he’s cooking this chef is happiest with cast iron and a hot fire. 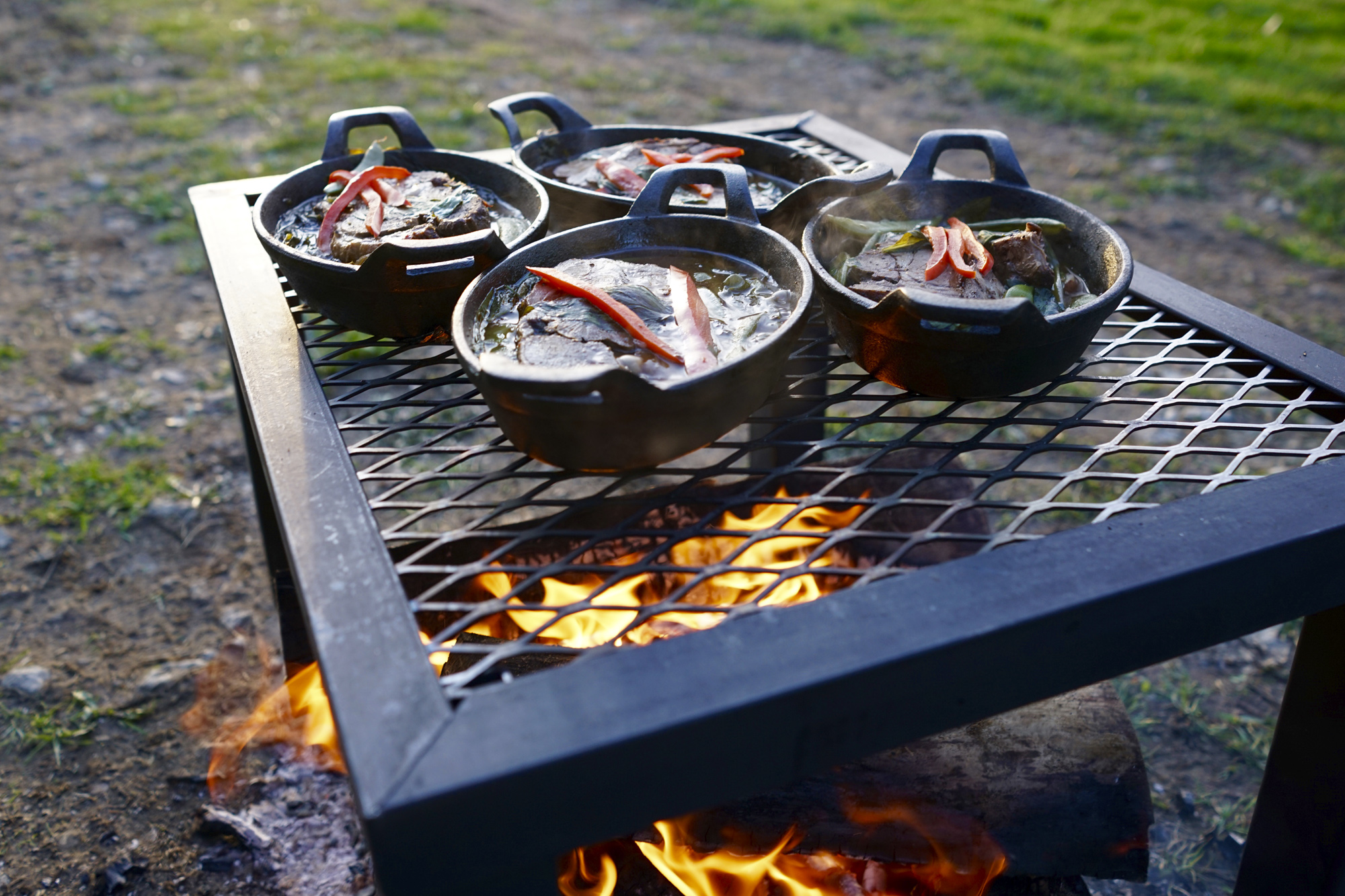 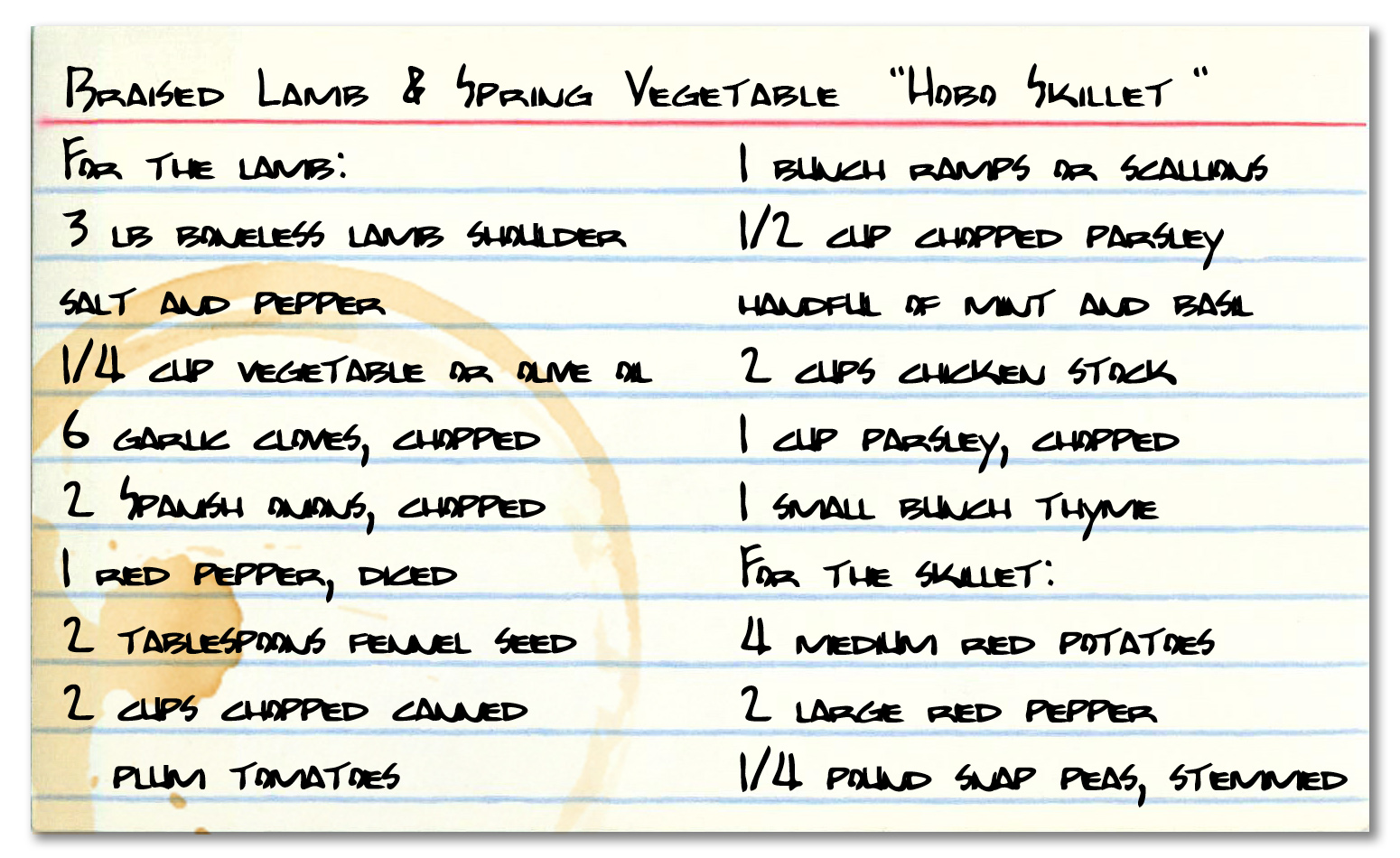