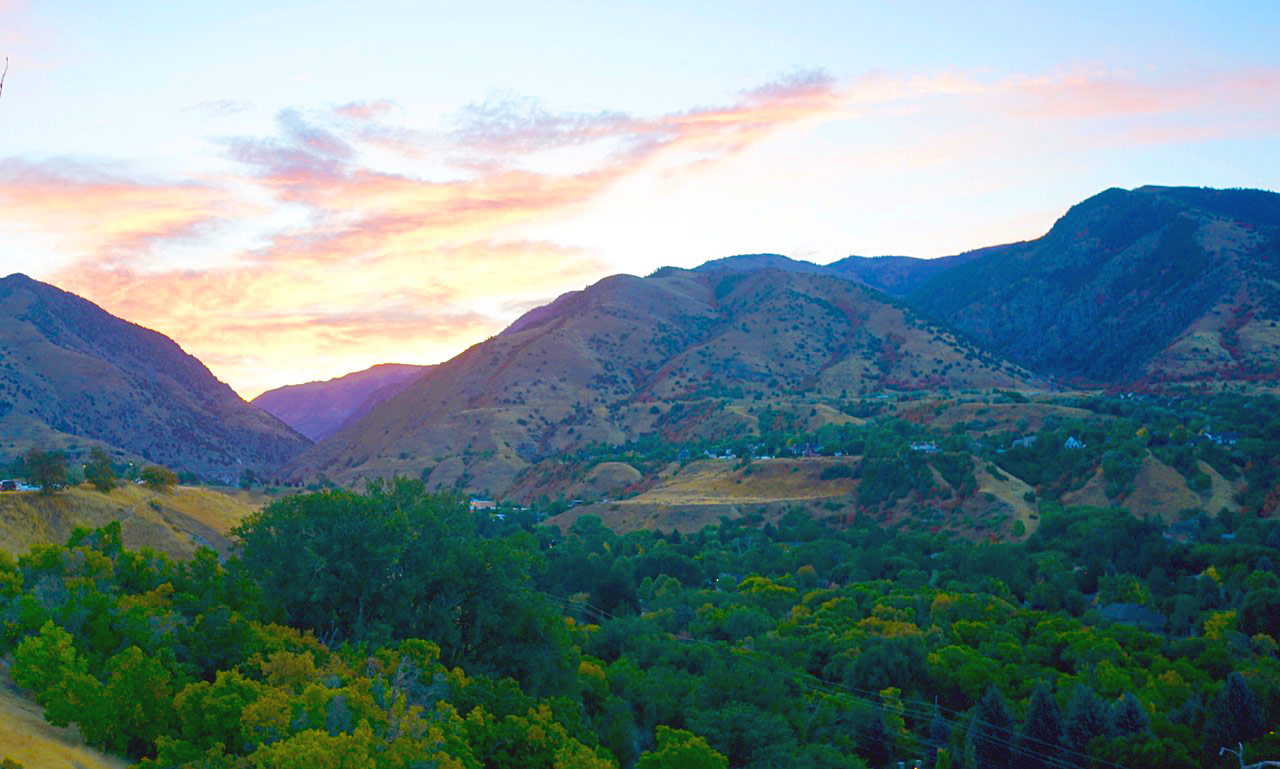 This journal entry is focused on the breakfasts of this trip.

On Donicio Gomez’s recommendation I had breakfast at Angie’s Restaurant, in Logan, Utah early on Monday morning. This was the first stop on my latest American Rivers Tour. An adventure that originated and ended in Salt Lake over the last week of September 2018. I’ve organized my dining notes in the event that you might want to find a list of places to eat, following the tour of rivers that I’ve chosen, breakfast of choice includes eggs, salsa and tortillas.

This old school diner was established in downtown Logan, Utah in 1983. It’s clean, efficient and functional with a long counter in the middle of the room, booths in front facing the road, and larger tables in the back. The wait staff is friendly, on point, dressed in black & white outfits and in most cases heavily tattooed. It’s a style that works at Angie’s. This team touches every table with a professional edge, you know who they are and why they’re there, as it should be.
The first waitress that greeted me asked what I’d like to drink. Of course, I thought, it’s Utah where the Mormon community reigns, not everyone around here drinks coffee so why should she offer it exclusively as is the case in diners elsewhere? But I do drink coffee, and the coffee at Angie’s comes quickly and it’s served hot.
Approaching my table—coffee pot in hand—a new waitress with a rocket red lipstick smile asked “What would you like to eat?”, I requested fruit, her response “the cantaloupe is good today” so I ordered the cantaloupe, then asked if she could recommend an egg dish with salsa, she suggested the Santa Fe Scramble, it was an easy choice.
In short time the cantaloupe hit my table, served by yet another cheerful waitress. The cantaloupe was in fact delicious, served ice cold with skin on, sectioned into 12 pieces.

The Santa Fe Scramble at Angie’s:

A simple, breakfast of scrambled eggs served over grilled chicken breast with a spoonful of salsa on top. One 10 inch warm flour tortilla served on the side. I arrived at Angie’s at 6:15am, the melon filled me up and I was anxious to get on the river. Having consumed about half of the Santa Fee Scramble I decided to roll the rest in the tortilla which I hadn’t yet touched and wrap it in a napkin. A perfect river snack for mid morning. Did these people read my mind? 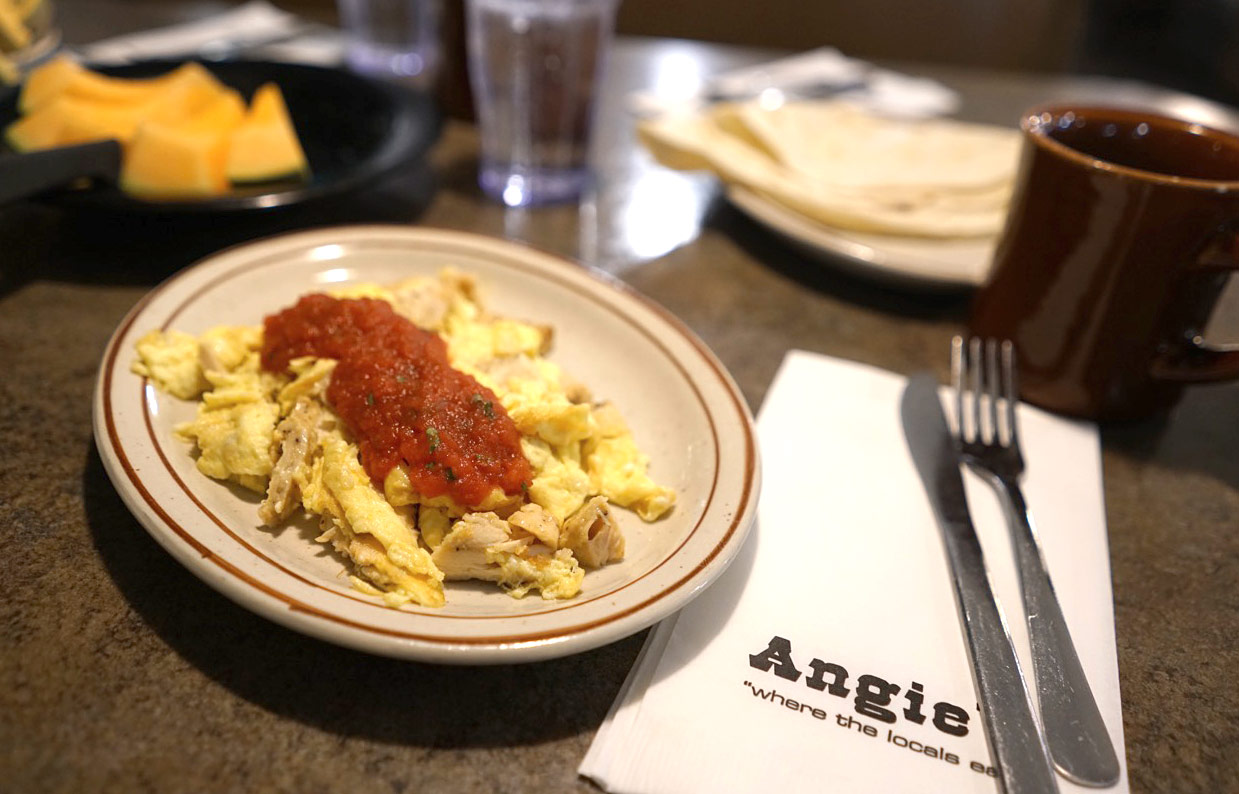 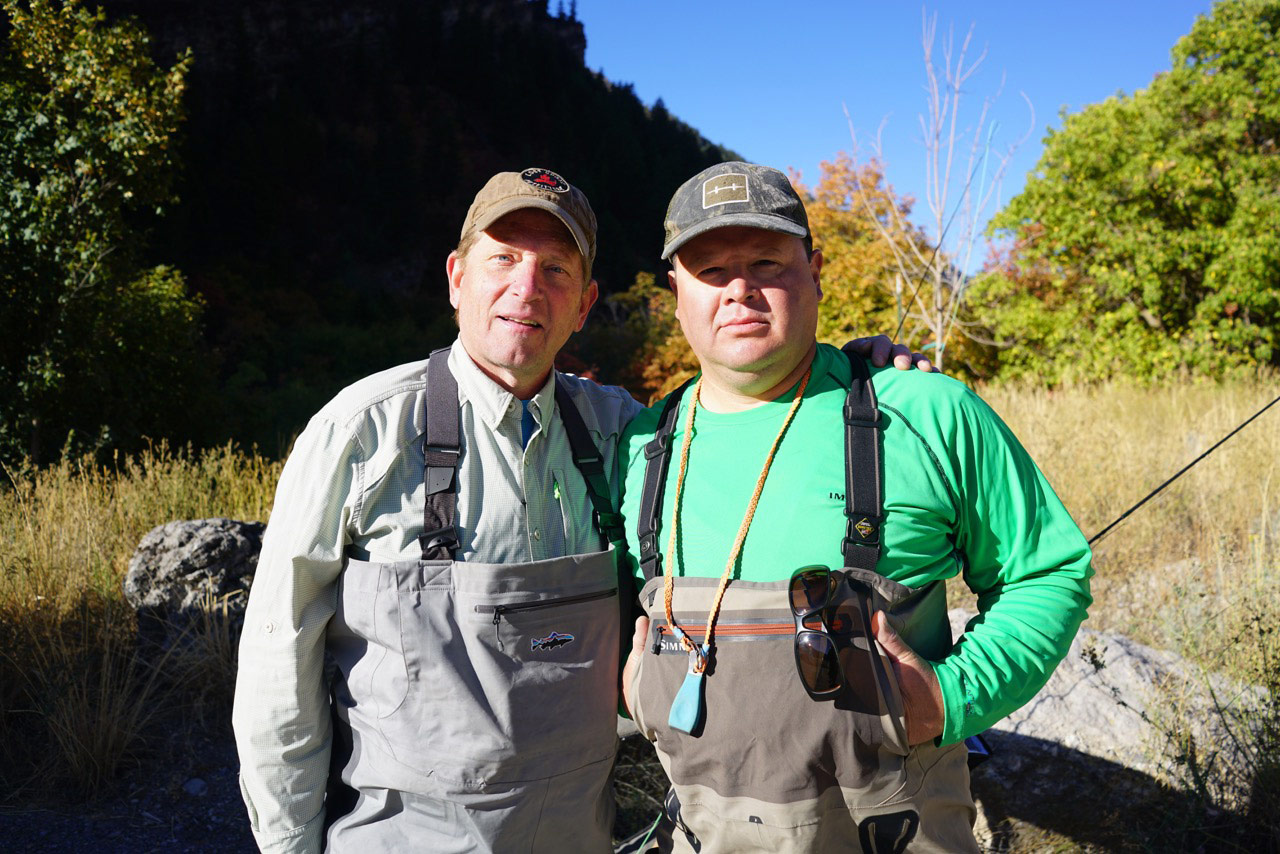 After a full day of fishing on the Logan river I packed the rented pick up truck and headed to Ketchum, Idaho for a visit with Bryant Dunn and his team at Sun Valley Outfitters. The drive takes about 3.5 hours and it was getting dark. As I pulled onto the main drag leaving Logan, I spied Angie’s on my right and decided to return for dinner to go.
The “Patty Melt” was a good choice.  (On the menu: A half pound lean ground beef patty topped with Swiss cheese, sautéed onions and our special sauce. Served on grilled rye bread.) It’s kind of messy as it should be with a sauce of catsup and mayo spread on one side and cheese on the other, a nice marbled pumpernickel/rye bread grilled to a crisp finish, surrounding the beef patty. Upon arrival in Ketchum at about 11:30pm, I was happy to know that stopping in the dark for a meal wasn’t necessary.

The next morning, I rose with the light. It was 34 degrees outside and the sun hadn’t hit the pavement on the valley floor as it began to creep up over the distant Sawtooth Range to the East.
My host for the day, Jeff Rose, whom organized and directed this days fishing trip wanted to bring me to his favorite breakfast spot “The Kneadery” in the center of Ketchum, also called Sun Valley, after the great ski resort.

The Kneadery is a full service restaurant, serving breakfast, lunch and dinner. The decor is perfect, featuring a pine log interior and a grand fire place in the middle of the room.
On arrival at 7:45am we found the room about half full. Jeff explained: “It is off season at the end of September”. Sun Valley has a short rest between summer travelers and the ski crowd that shows up in mid December. Most of the guests in the room were my age (late 50’s). They seemed happy to be at home in their regular haunt, free for a time of the multinational tourist spin that makes Sun Valley famous. Jeff was proud to proclaim how much he loves his second home town and his breakfast spot (he makes his living in LA) because “everyone is so friendly”. I found that to be true.

The Kneadery is staffed by a duo of young women whom seem to double as hostesses. This tag team wore thin, ribbed jackets and moved about the room with confidence, lacking welcoming smiles but focusing on business at hand. I got an impression that they knew everyone by name. 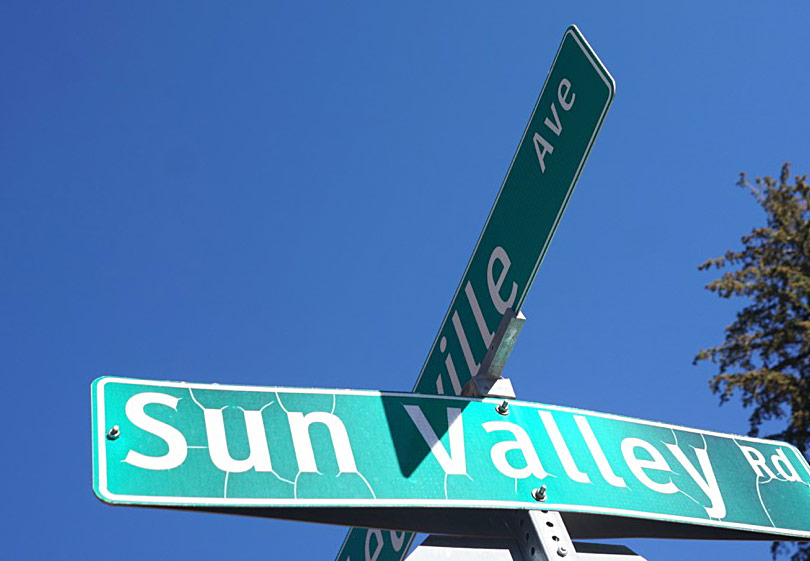 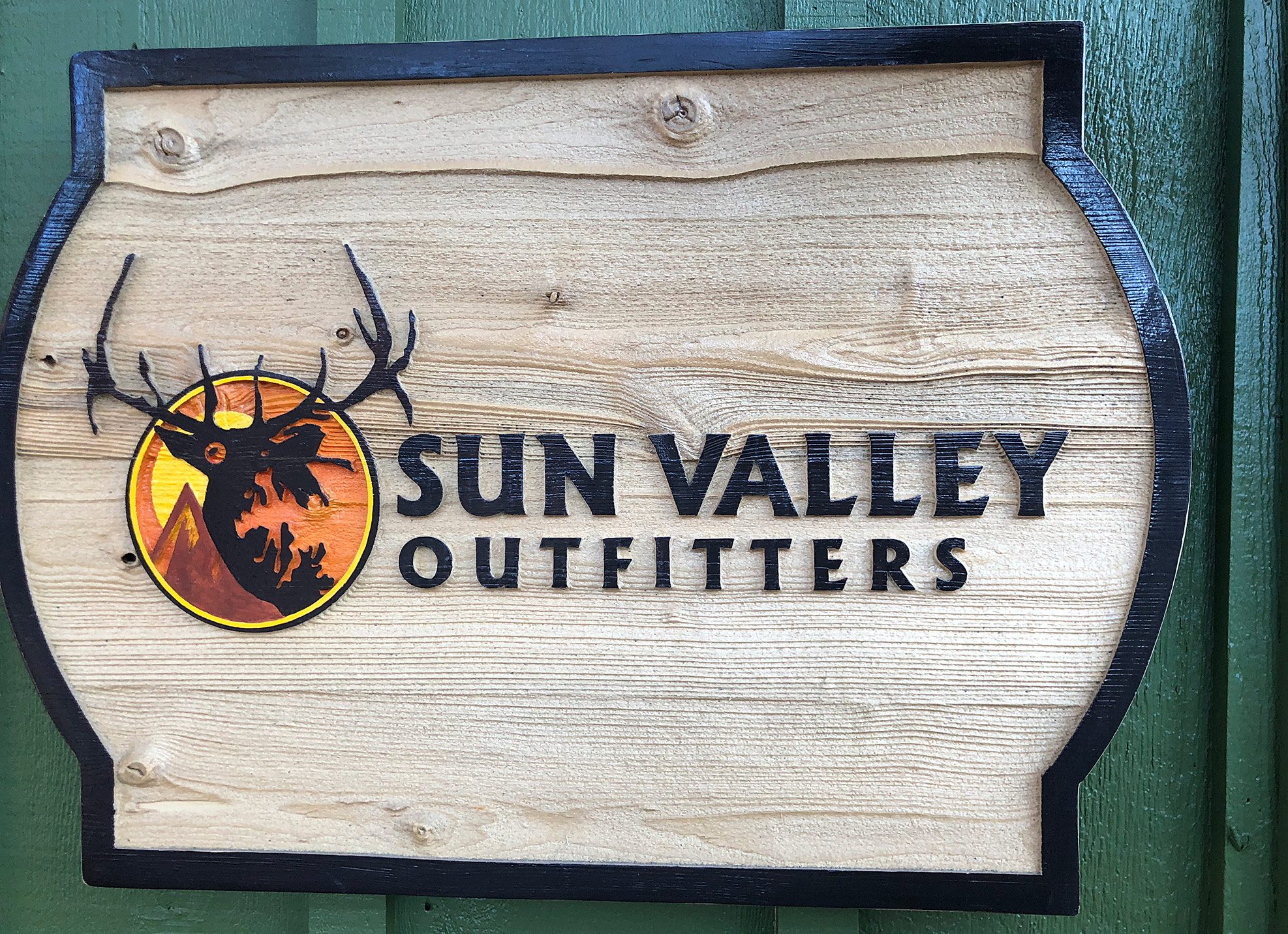 An easy choice. When planning to be on the river for the entire day a full breakfast serves as an important baseline. The Kneadery came through with a large plate of eggs, beans and flour tortillas. The salsa was standard with a nice, snappy edge, the beans followed suit, melted cheese with a beautiful light browned crust. A sliced half of an avocado and 2 crisp pieces of bacon rounded out the dish. My impression of the Kneadery is consistent with what it should be—approachable, reliable, clean & comfortable. It’s all of those things leaving crafty and creative to others. 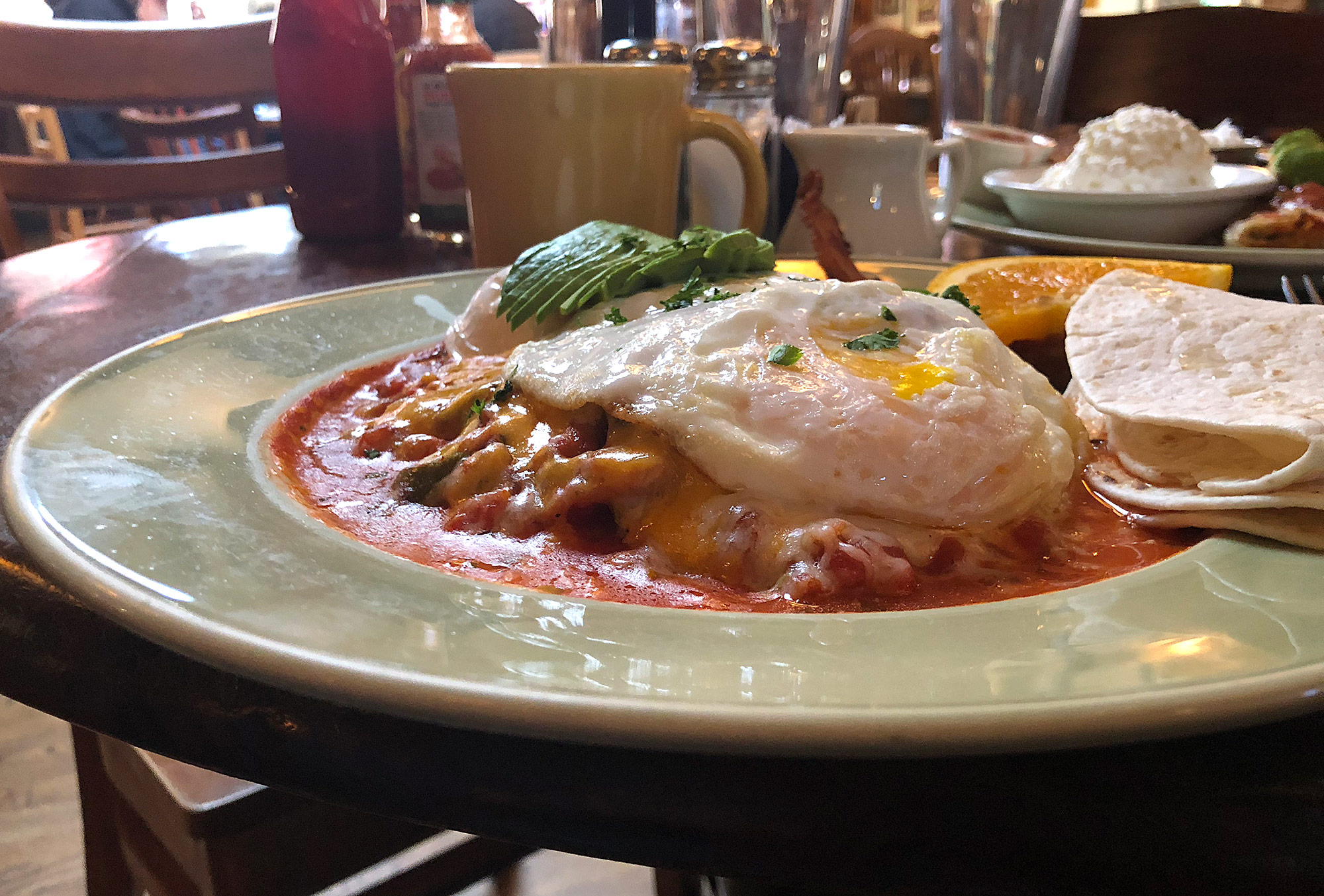 After a full day on the Big Wood river I embarked on the longest drive of the trip from Ketchum to Victor, Idaho.

Again through dark of night. The east bound trek provided 2 surprises. The first was watching a full moon rise over craters of the moon National Park, an experience that I hope to repeat someday with more time. An hour later and 30 miles west of my destination Victor, I was pulled over for missing a stop sign. Driving through the small town of Arco, two hours away from Victor, I reached a T in the road and completely “blew off the stop” as the officer later informed me. On review of my license and the Hertz rental car registration he slowly approached my vehicle and sternly warned me to slow down, adding with great surprise to me, “ I’m just going to warn you on this one, your record is clean and I don’t want to mark it with a missed stop sign in the dark.”

The next morning I realized that the drive to Victor was worth it. Waking up in the shadow of the Tetons is sublime, especially when New York time still runs the internal clock. Another day on a river awaited, this time the Lower Teton would have me in a drift boat with my old pal Simbo. Rising to the pink and bright moon hanging over wheat fields west of Simbo’s pad on the Wyoming bench just inches east of Idaho’s border, my first thoughts went to Nora’s Fish Creek Inn and that it’s time to drive over the pass to Wilson, Wyoming for yet another delicious breakfast.

This dish takes me back to my youth when I visited Nora’s. The first time it hit the bar in front of me was in the mid 80s and it hasn’t changed a bit. These Tex-Mex huevos feature green salsa made of puréed hatch chili’s from a can, perhaps onions and cilantro have been added, the chili flavor dominates, and it’s supreme. Beans, like some others in this review provide solid grounding but no clear linkage to culinary technique, the eggs are cooked to order and the whole thing is submerged in a dreamy sheen of melted mozzarella cheese. My day was just getting started and Nora’s coffee cried out for a sweet compliment so I ordered the sweet roll, too—a wise move—served hot and drizzeled with sinfully sweet icing. 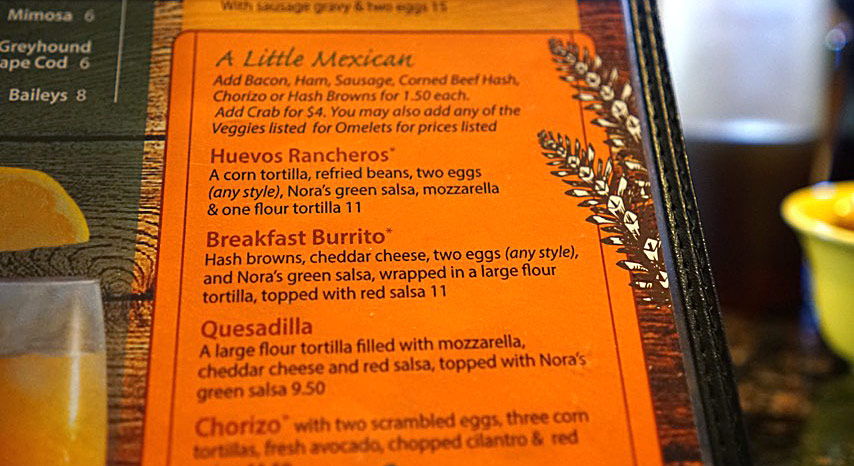 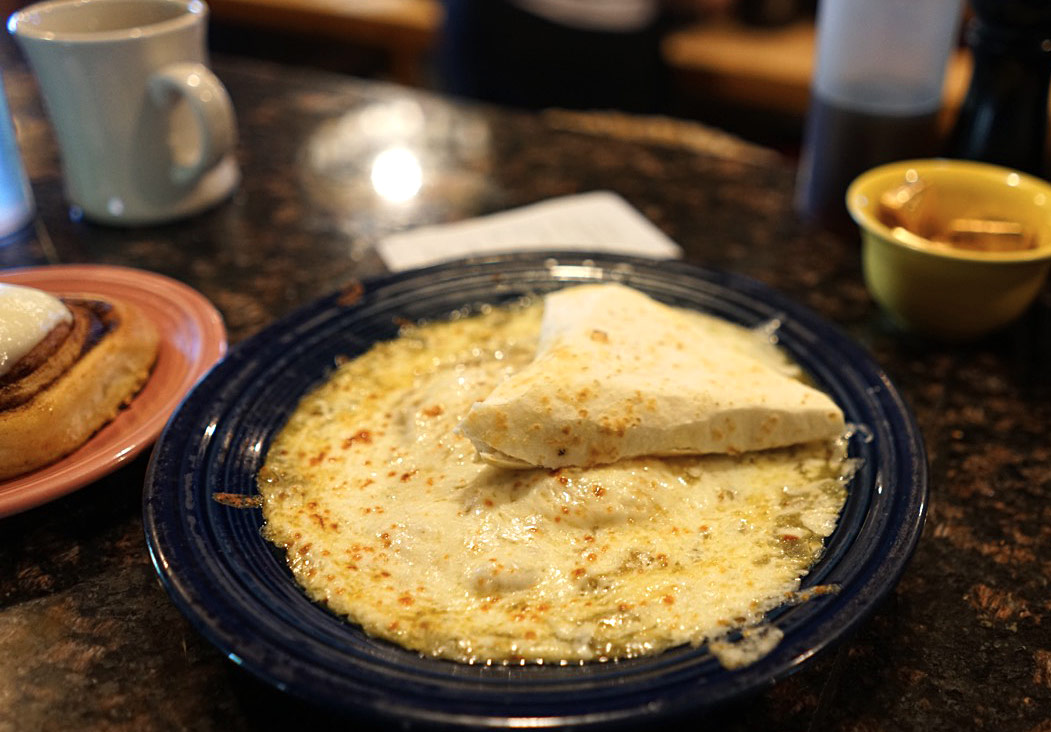 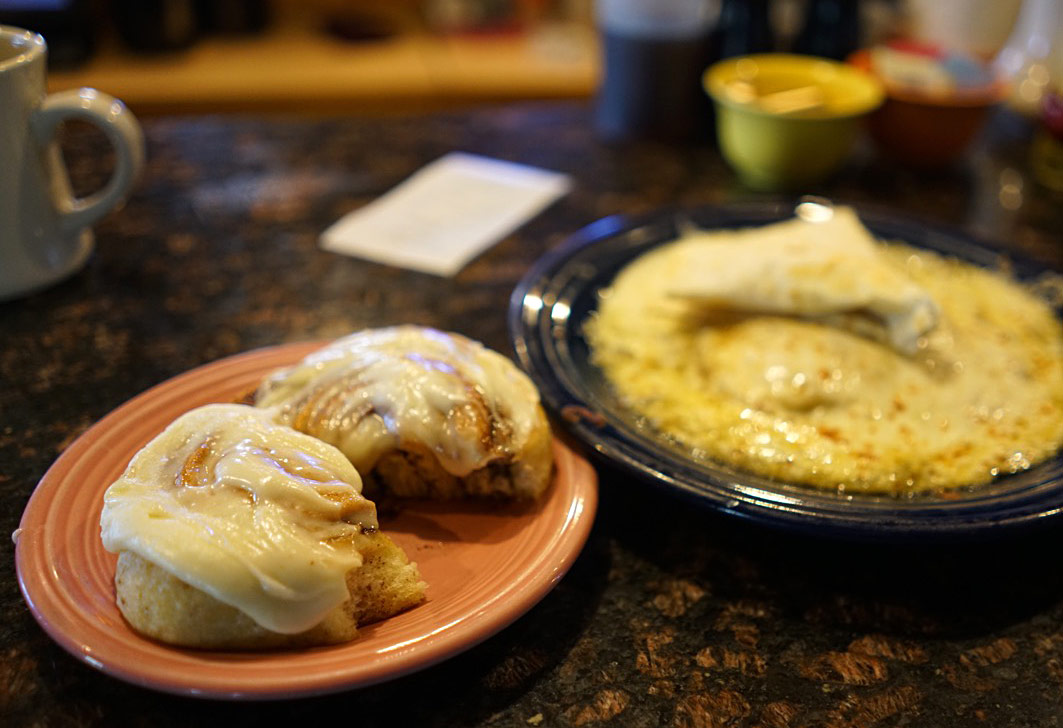 Breakfast is the most important meal of the day, especially on a fishing trip when you’re not entirely clear on when or where your next meal might come from.

Over the past 6 days I’d covered over 1200 miles. Still sleeping at Simbo’s and fishing the Teton, in Victor, Idaho my last morning had me thinking about the 400 miles and my return trip home. I would be flying out of Salt Lake City on Sunday morning. In the distance, Aspen trees on the benches of the Grand Tetons were a blaze of mahogany and tangerine. 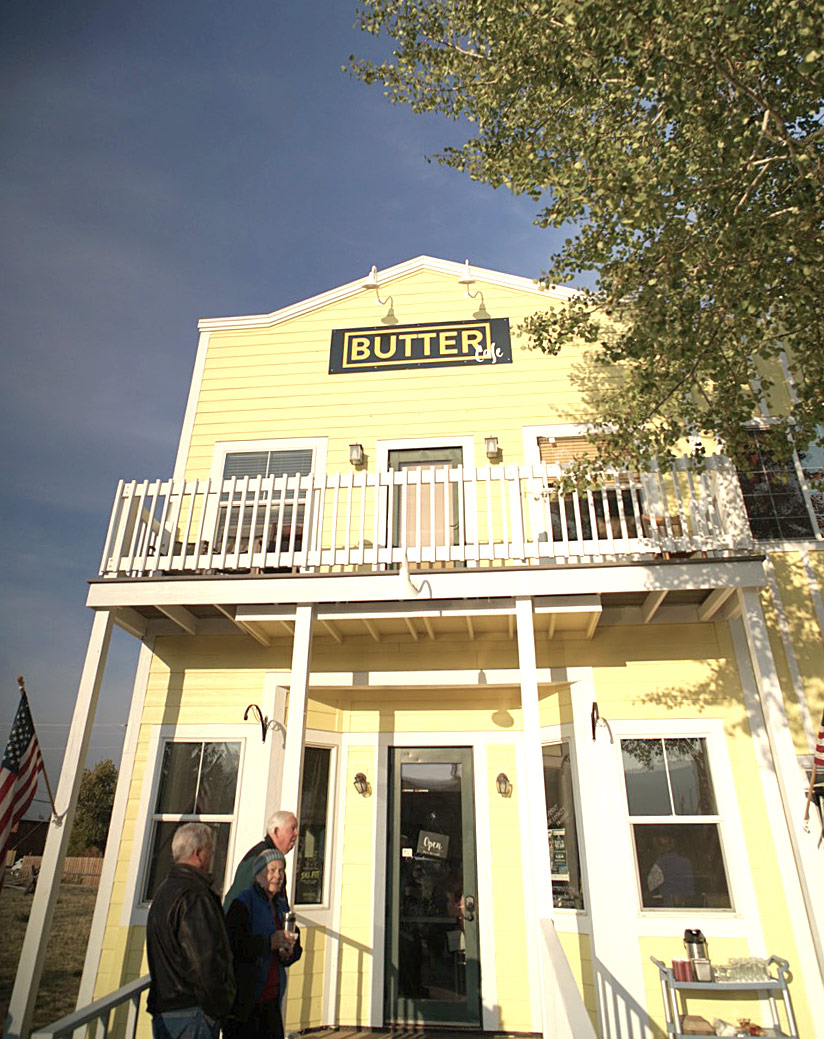 From my seat in the window at Butter Cafe, a bakery/cafe on Main Street in Victor, I watched a crowd fill in after arriving when they opened, promptly at 8am. 15 minutes later, huevos have been consumed and a berry topped croissant just hit the table, I’m inclined to ask for a check.

At the high top table next to me a smiling couple oversees their crew of 3 kids, one (obviously the oldest son) looks exactly like his father with ginger hair, a freckled nose and eyebrows that meet in the middle, the young fella looks puzzled as he scans his brunch menu. The 10ish female next to him, an effervescent Asian child orders hot chocolate while the boy to her left, a curly haired black boy of about 6 years, wears a tired frown. This multi cultural family has road trip written all over their faces.

The rest of the room is occupied by 2 tops of mountain bikers with back packs on the floor and trail maps on tables, 3 fishing guides in Worldcast Anglers guide hats, visors festooned with cooper top nymphs and wearing line clippers drapped about their necks, chowing down on egg sandwiches.

Towards the other end of the room a group of ranch hands drink coffee, hammering out the days plan, cellphones in hand, cowboy hats respectfully on their knees. At the entrance a couple in blue jeans and boots scan the room as they stand in the sunshine, happy to see that this stranger, camera in hand, has vacated a valuable table in the corner of the room.

With a 3 hour drive and 10 miles of trout fishing on the Logan river ahead, this mornings Huevos Rancheros were an easy choice. The waitress at Butter, blond hair braided and dressed in a navajo patterned chamois pullover, smiled and repeated my order, then she asked if I’d like my eggs fried or scrambled, and suggested I add link sausage. I also asked for a croissant that caught my eye in Butter’s baked goods case near the door. The order was placed as she poured coffee in a strange glass mug, nice to look at but not functional as it cooled almost before my order was served, which actually happened quickly.

Prepared with 2 crisp corn tortillas is a dish organized to sit high off the plate. It provides the diner with access to each element of the recipe independently which I find appealing and different. On one side of the construction home cooked black beans float off the stack of tortillas, on the opposite side a pool of chorizo salsa emerge as an independent nibble. Nice to see a warm pinch of queso fresco adorned with cilantro as a fresh topper finishing the heart of eggs and ranchero chili sauce. Not a salsa but an authentic, well balanced chili sauce that complimented every aspect of this marvelous breakfast entree. 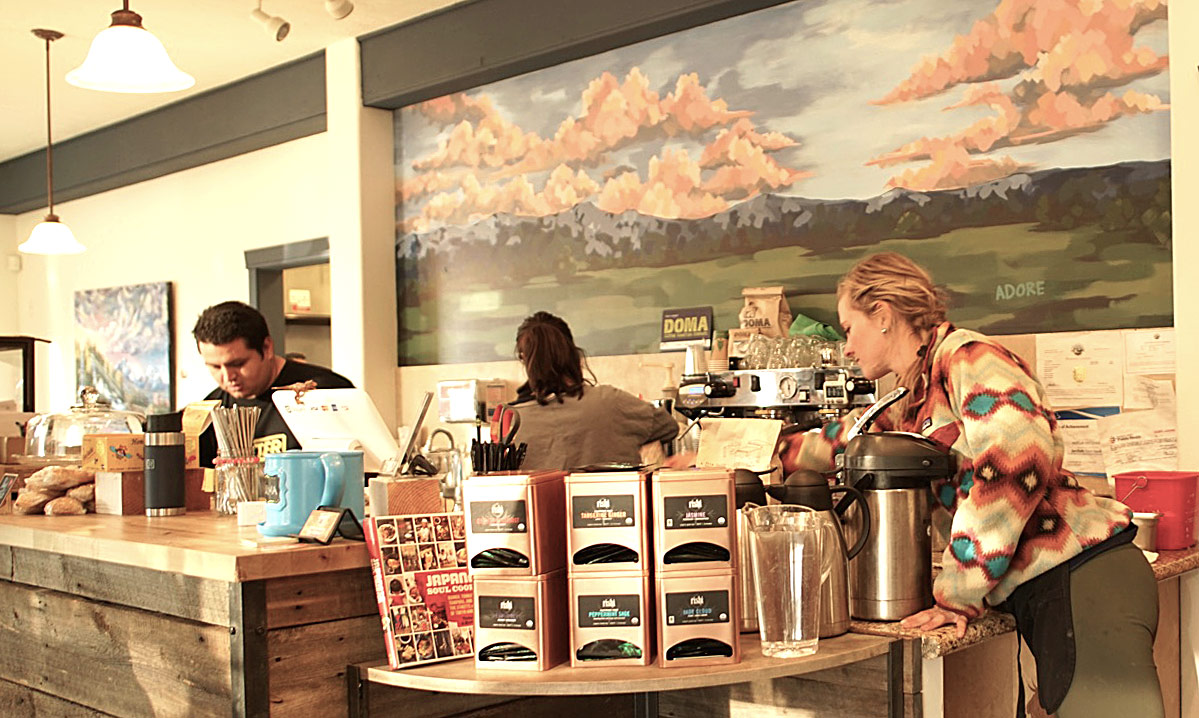 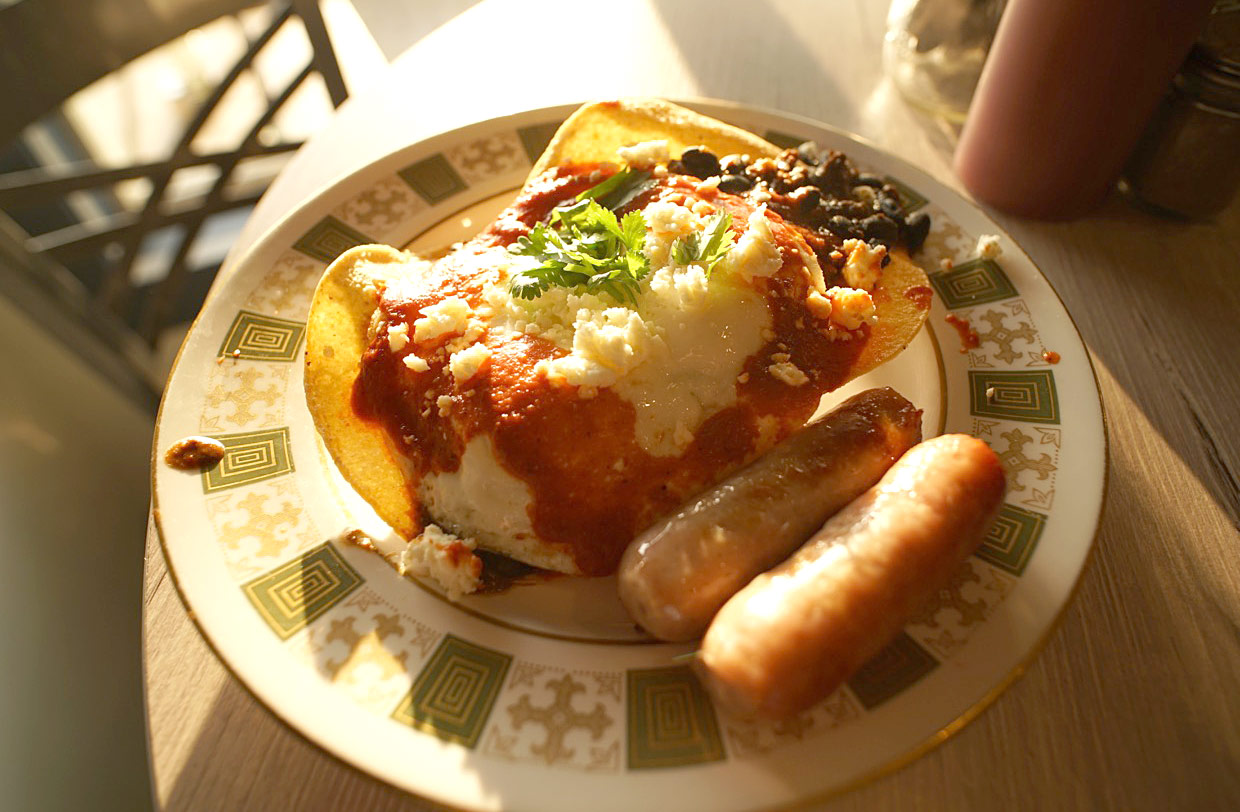 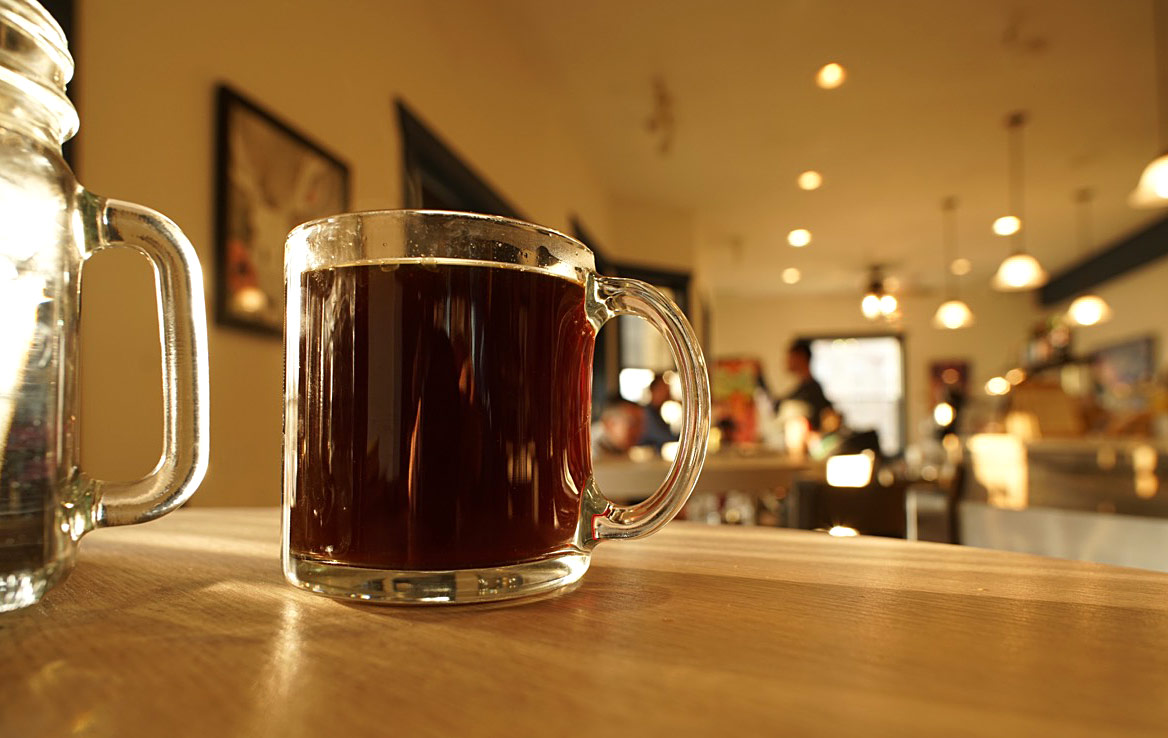