Enjoying peace and quiet at the Beaverkill Valley Inn

I seek warmth and kindness. Emotional security for me emerges from distant places where the sound of moving water fills quiet corners and quiet kitchen voices encourage just one more bite. This old soul experiences clarity in vintage buildings on back roads, thinking about who has visited in the past and how soft lighting after dark may have soothed their anxiety like it has mine. Sitting quietly on the riverside porch, my life as a mature American male begins to feel actualized next to this relaxing stretch of the Upper Beaverkill river in the Catskill mountains of New York.

The Beaverkill Valley Inn just 2 hours from my Connecticut restaurant, Estia’s Back Porch Cafe, transports me to that comfortable, well worn place. This was my second visit to the BVI, not much changes here and that’s the point. 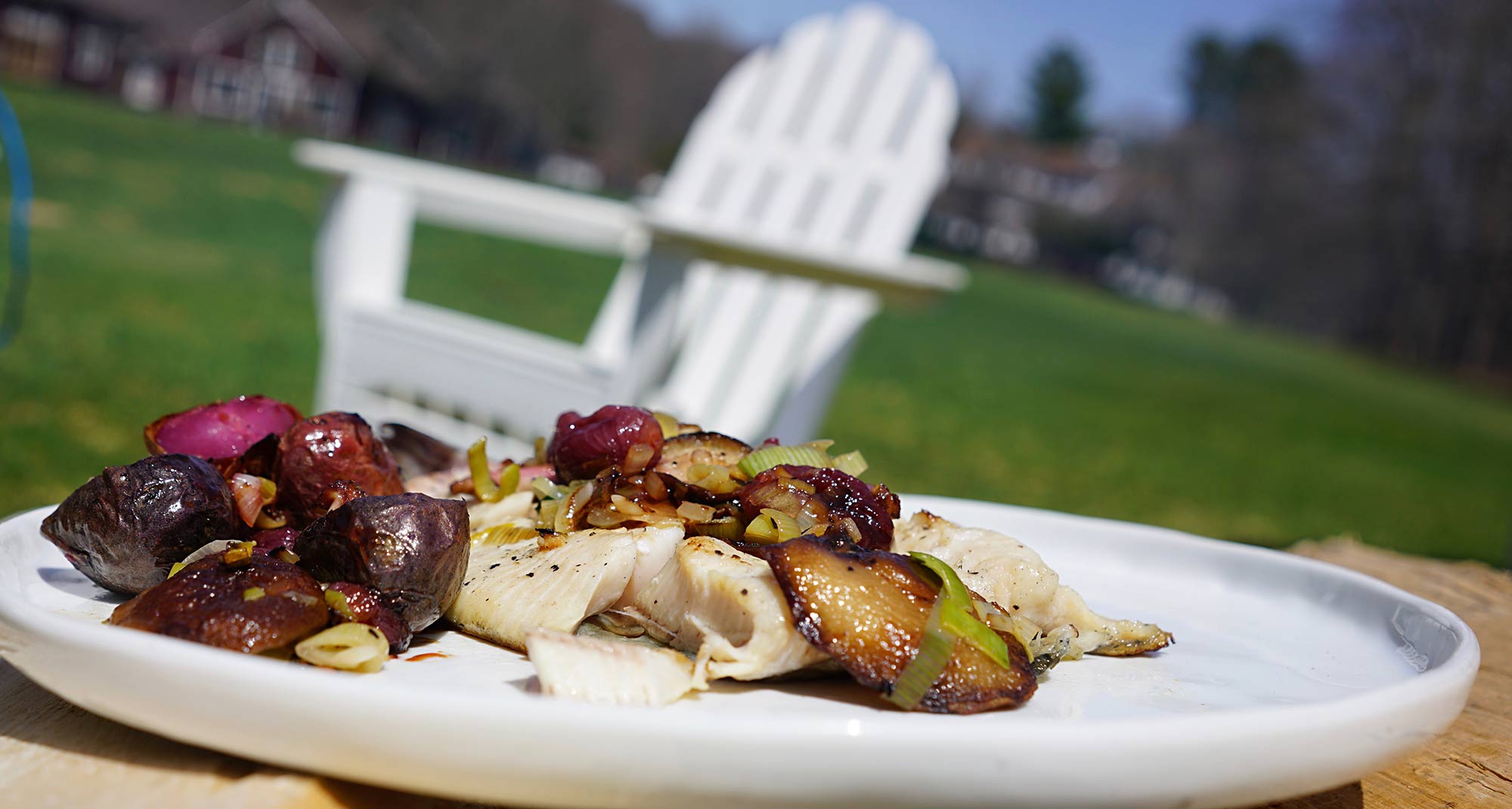 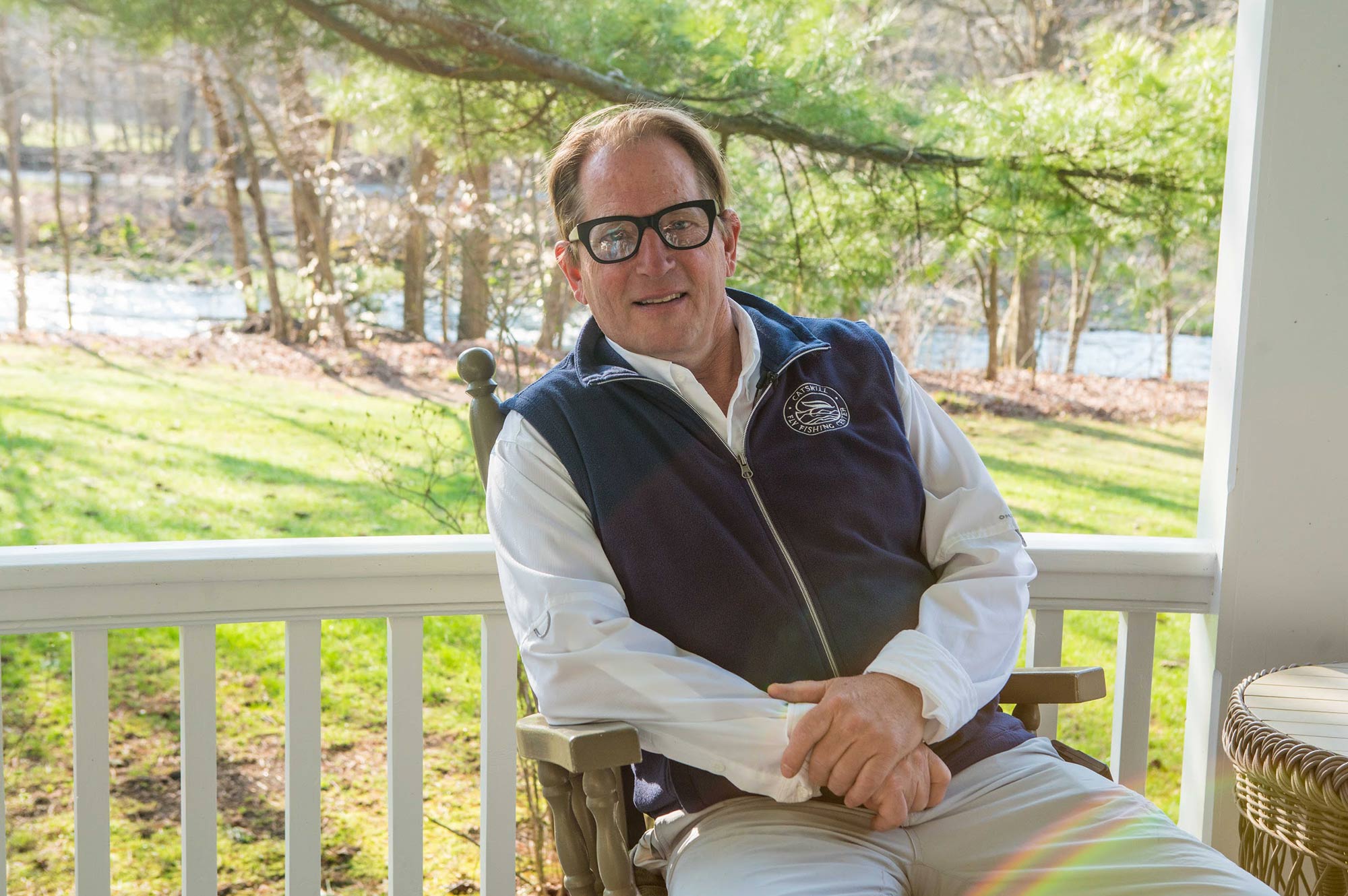 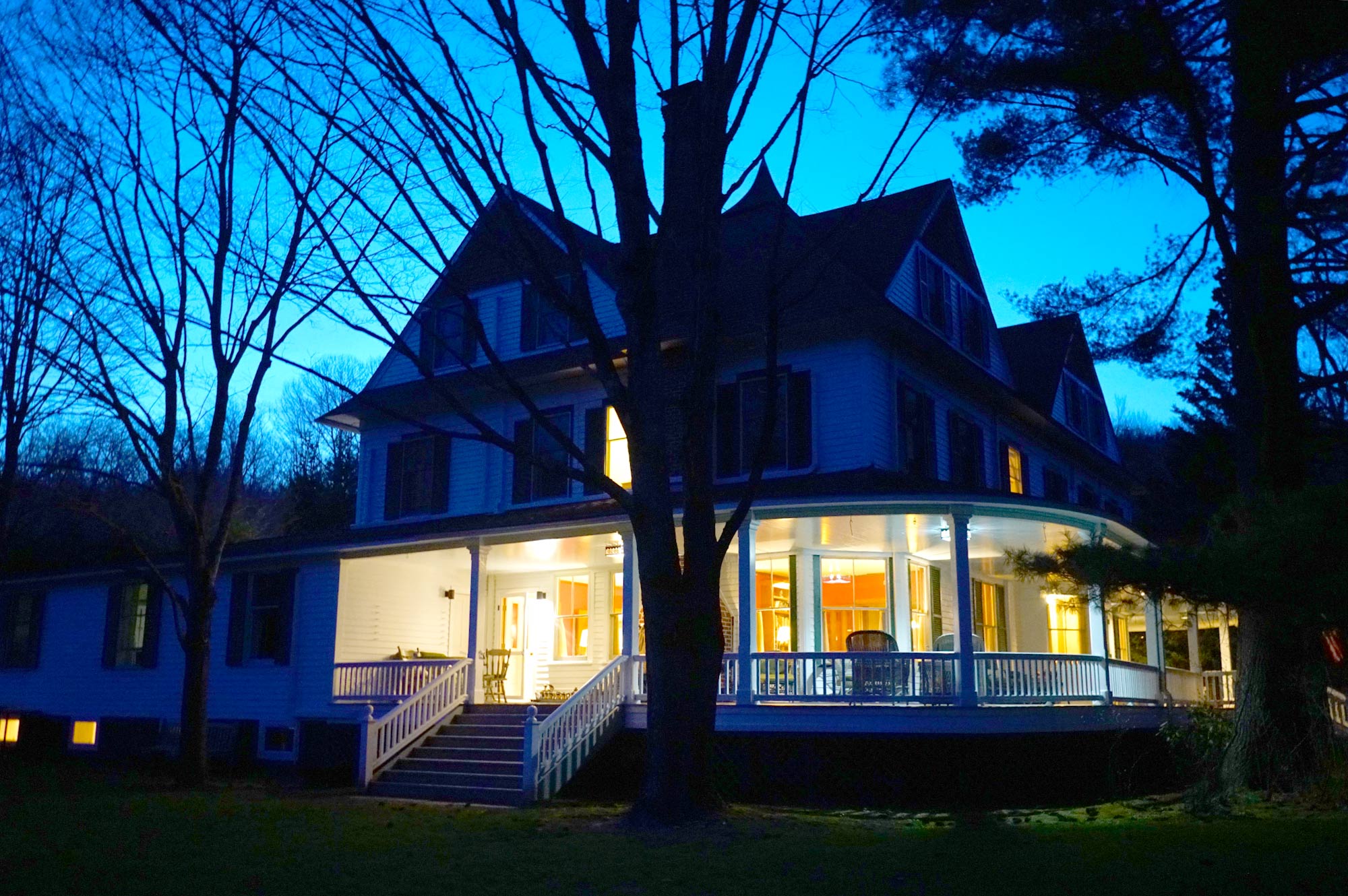 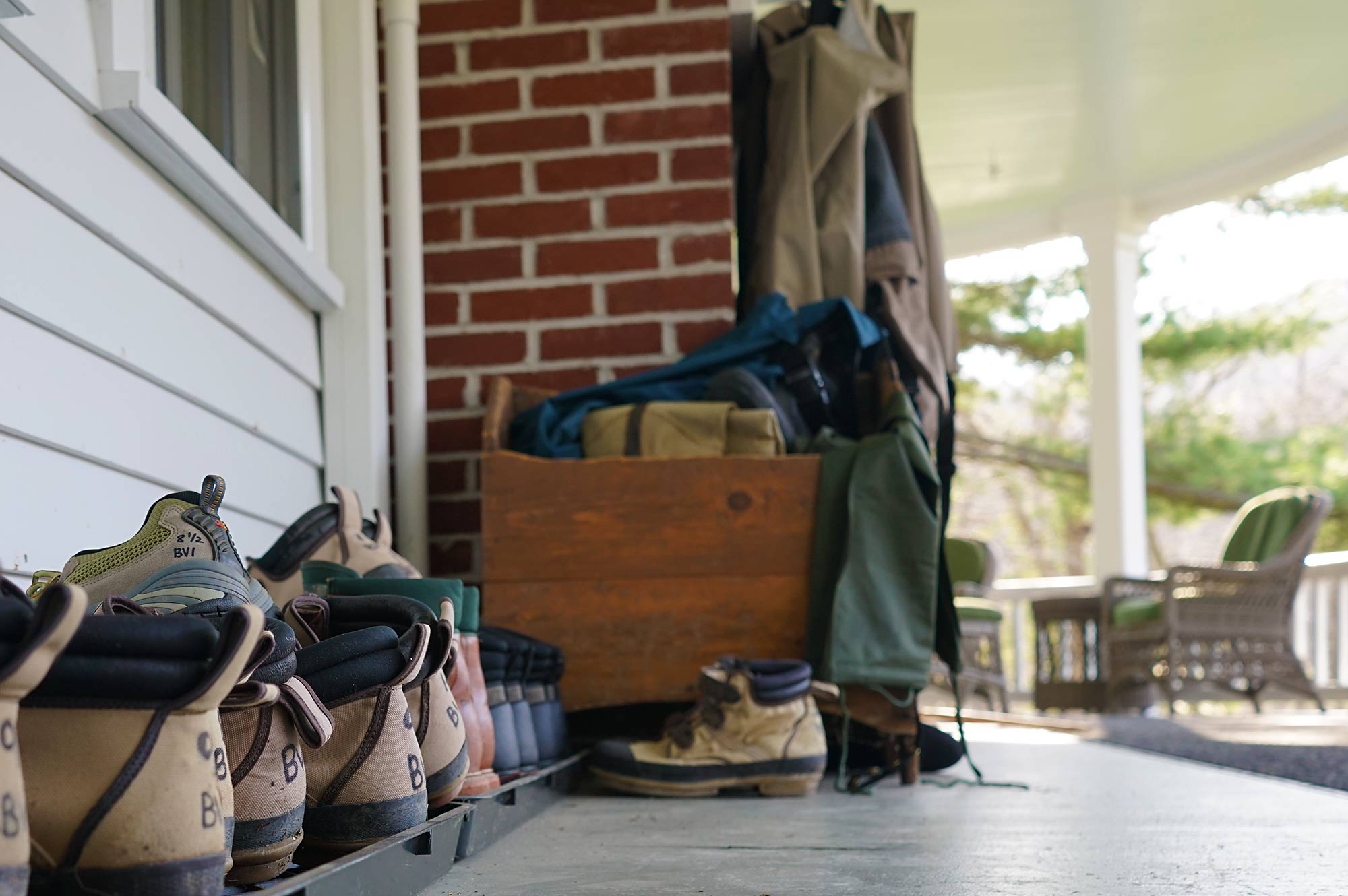 On arrival we were greeted warmly and reminded of basic requirements a guest should follow. This is a catch & release property, fly casting only. Clean your wading boots prior to entering the river, wear your ID card while fishing so you can be identified from a distance as a guest of the lodge (only BVI guests can fish the mile of river surrounding this Inn). No do or don’t – just basic respect for the property and those you might share it with during a stay. 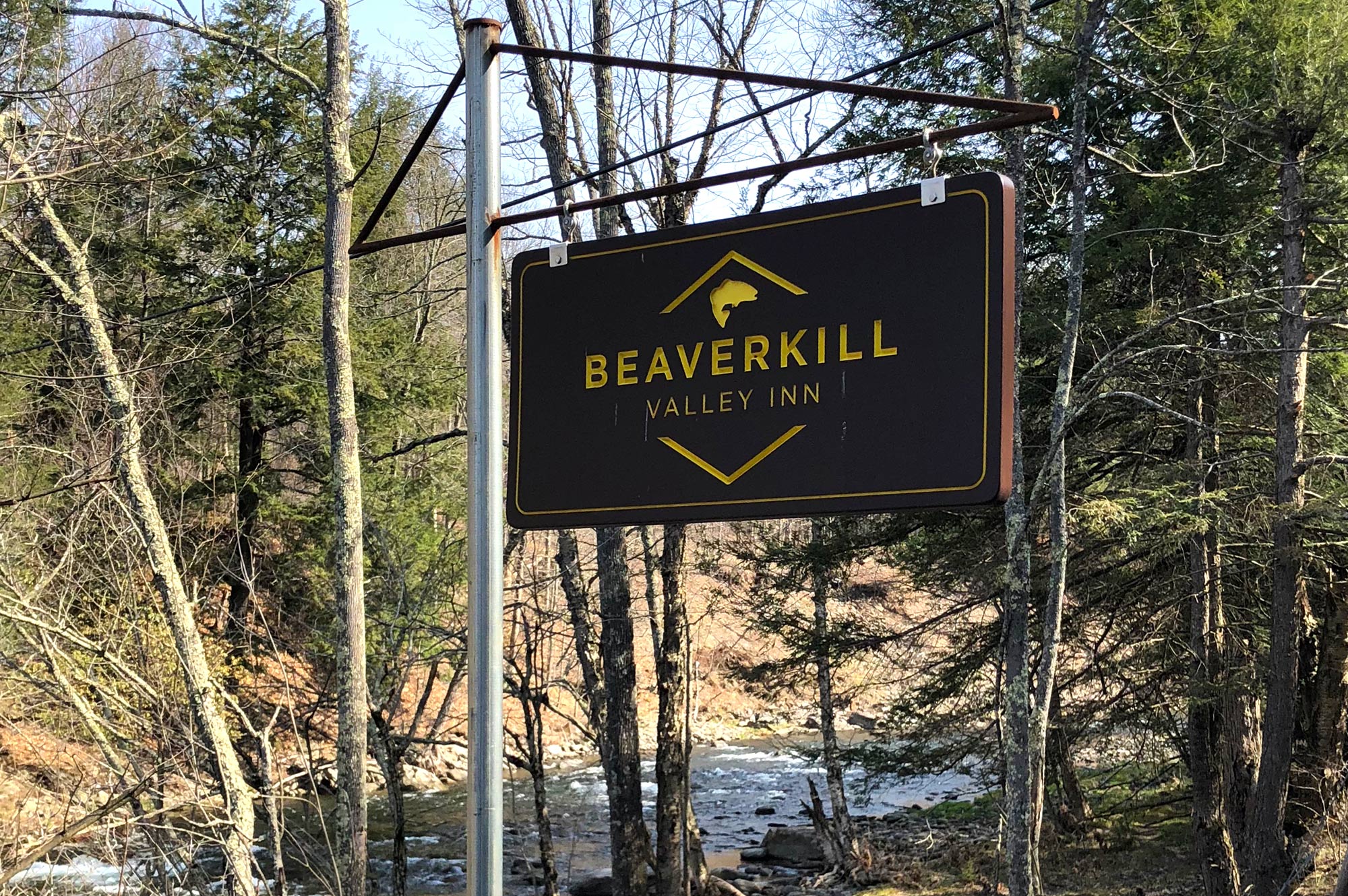 You can’t miss the river, it’s necessary to cross it on arrival. Deep, cool pools call the trout fisherman. A quick 5 minute walk up the road to start, wade in and strip some line. We started with an over/under set up, nymph below stonefly. After several minutes of getting used to Guide Nick Rubicco’s bamboo rod, casting to the opposite bank became achievable. Then, 5 minutes later, comfortable with the pace of the Upper Beaverkill and an appropriate mend, the tap of a trout peppered my line, not a take but a simple clue that things were working. Another 5 minutes and a few more soft hits, then a take, my first trout was on. There’s a deep cut just under the bridge on the Inn side of the river. Casting from the opposite bank, just upriver from the buttress gave my nymph enough time to float down into the trouts lair. A beautiful brown male twisted and turned in the current, Nick’s handmade bamboo rod balanced the action, after an exciting encounter my first Upper Beaverkill trout was on camera, his familiar hook shaped lower lip admired and then the fish was calmly released.

Moving down river, passing the BVI we had encounters with several more trout adding action to bamboo. Only one more brown made it to the net, a heavy, round nosed female took a “mayfly” on the surface, no kype on the jaw this time, we grabbed an underwater look with the camera (see video) – colorful and classic.

Arriving at the final pool well below the BVI, Nick suggested a third approach, swinging a white woolly bugger down the fast moving ledge on the road side and stripping the fly through the top edge of the next set of rapids. Again, touch, touch like salt and pepper on almost every cast, I just couldn’t set the hook. Finally, after switching to a smaller black fly of the same design I managed to set the barbless tip in the jaw of a small native brook trout. 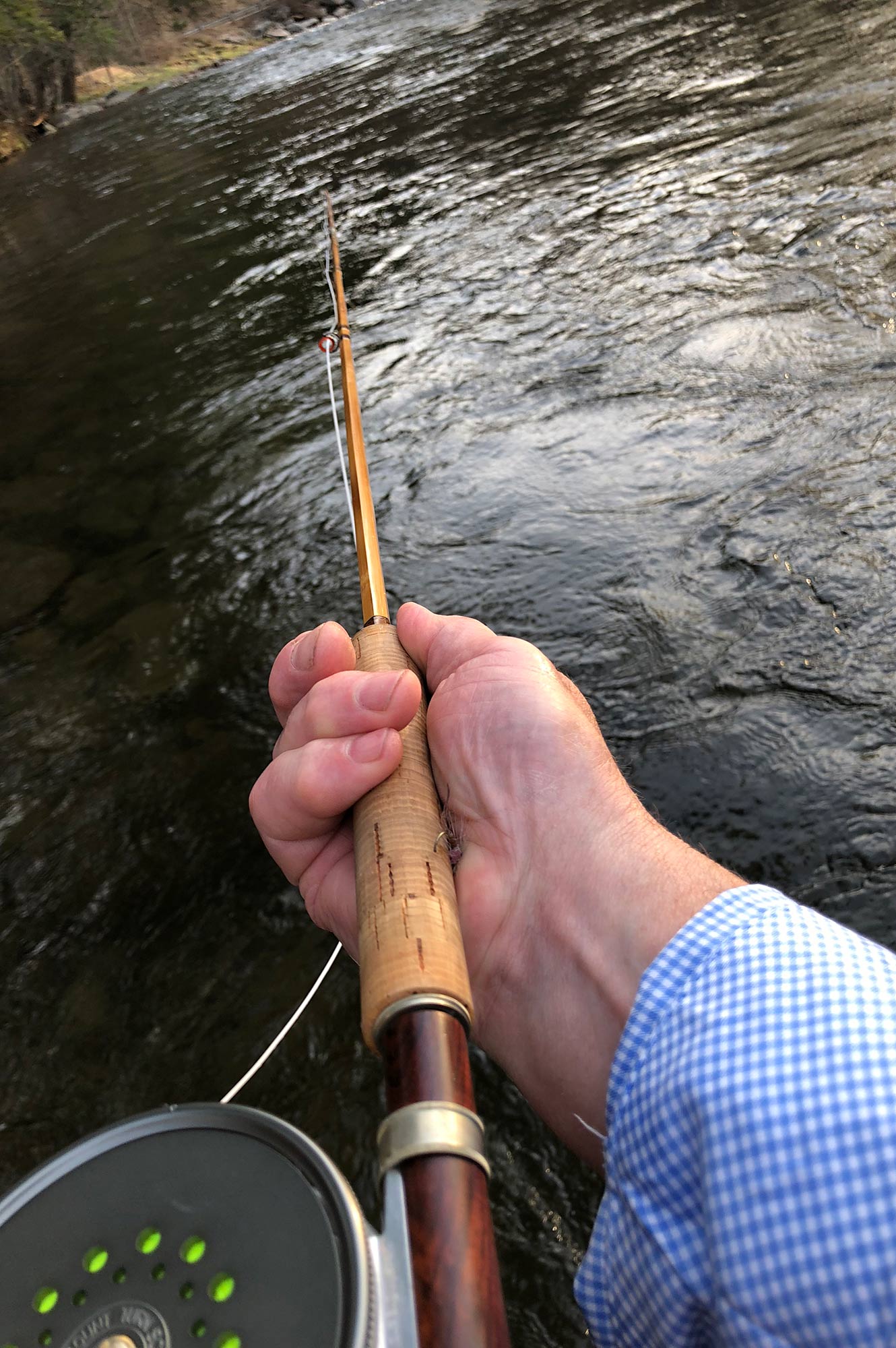 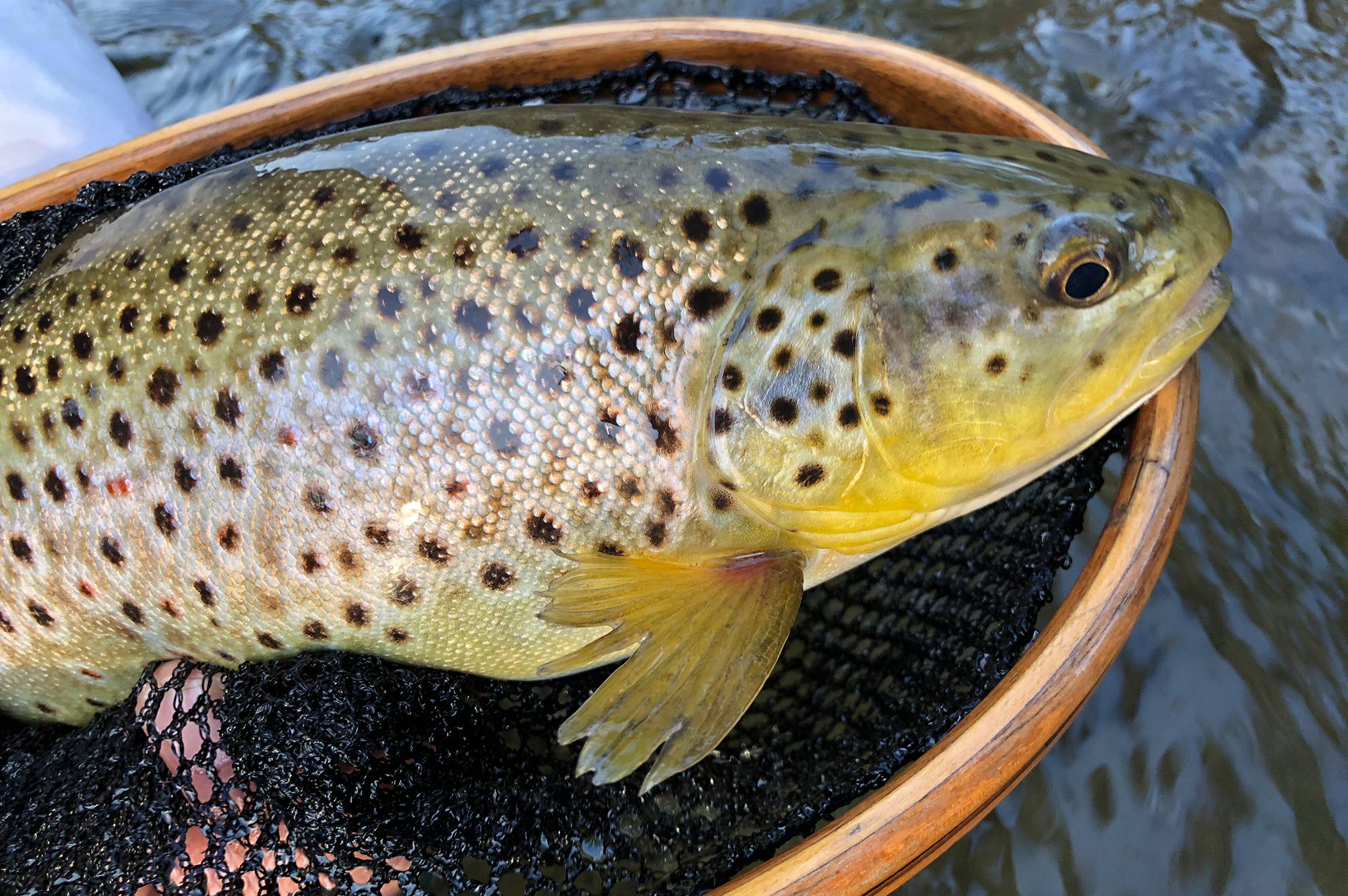 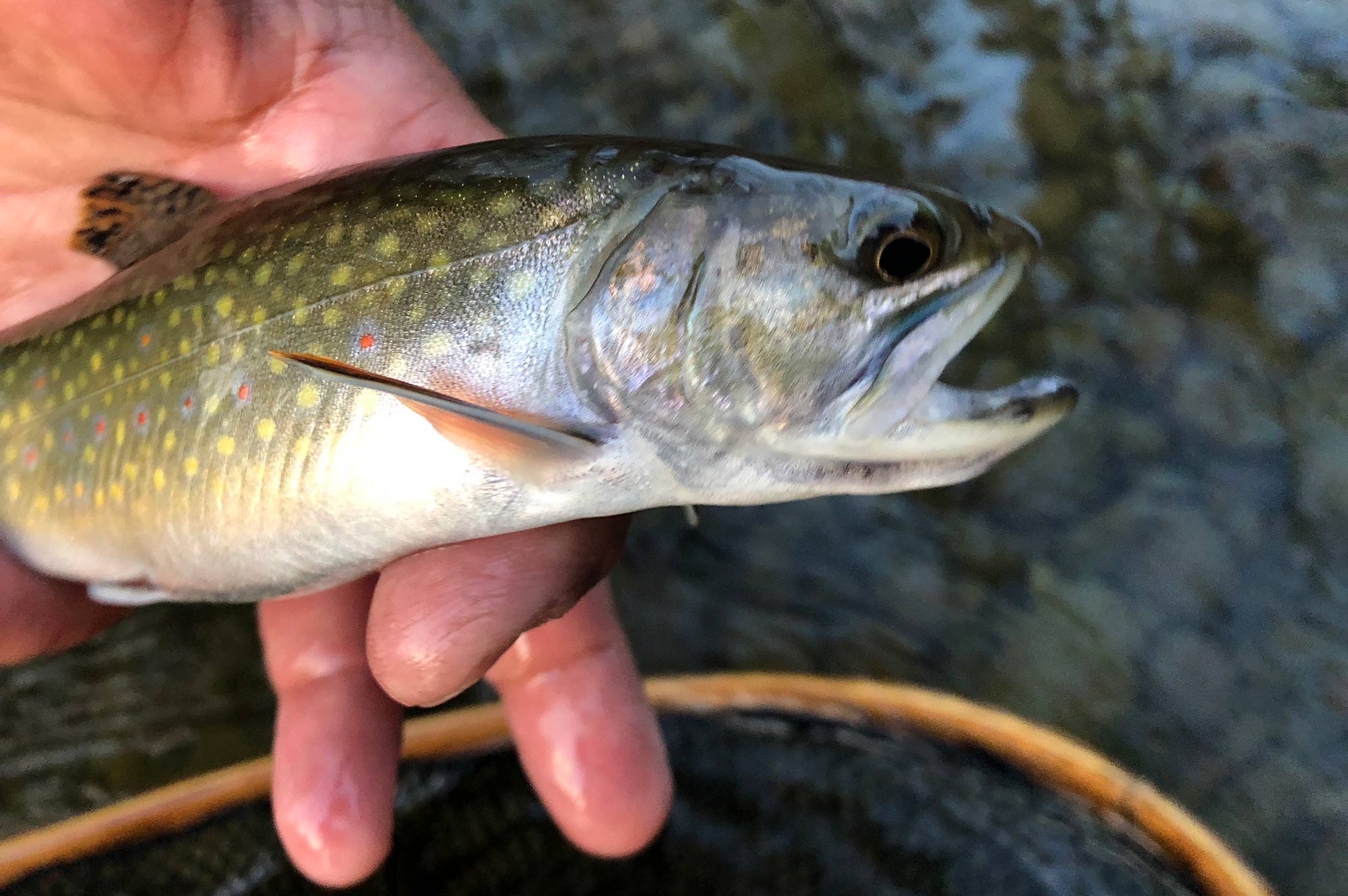 Returning to the lodge satisfied and content Nick & I had the good fortune to meet Chef Galen Sampson. With a quiet evening ahead, he had set a fire in the field between the lower pool that I’d just fished and his kitchen. Testing a new recipe was his task, I was the beneficiary. I wrote out the recipe for everyone to see here. 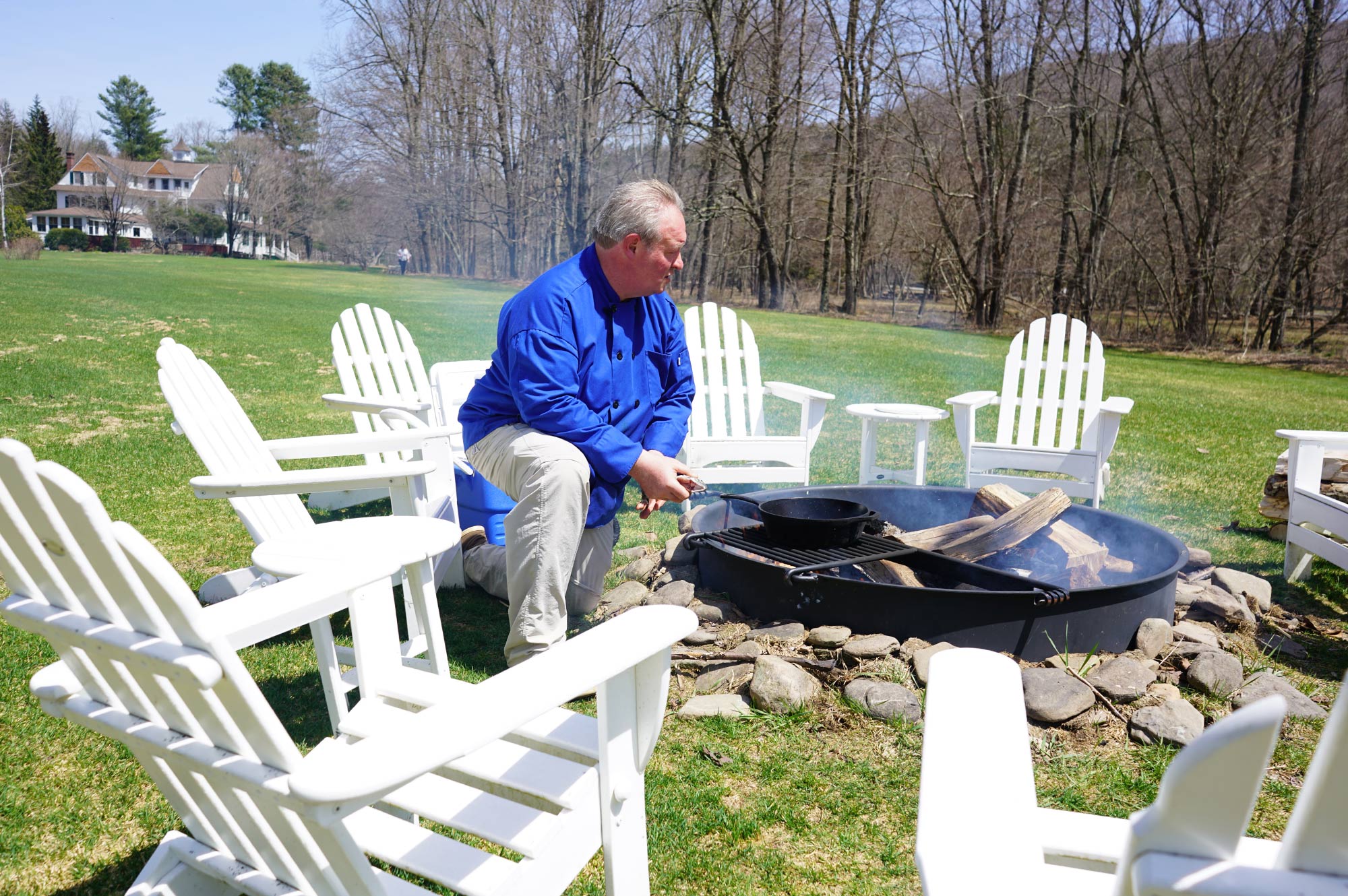 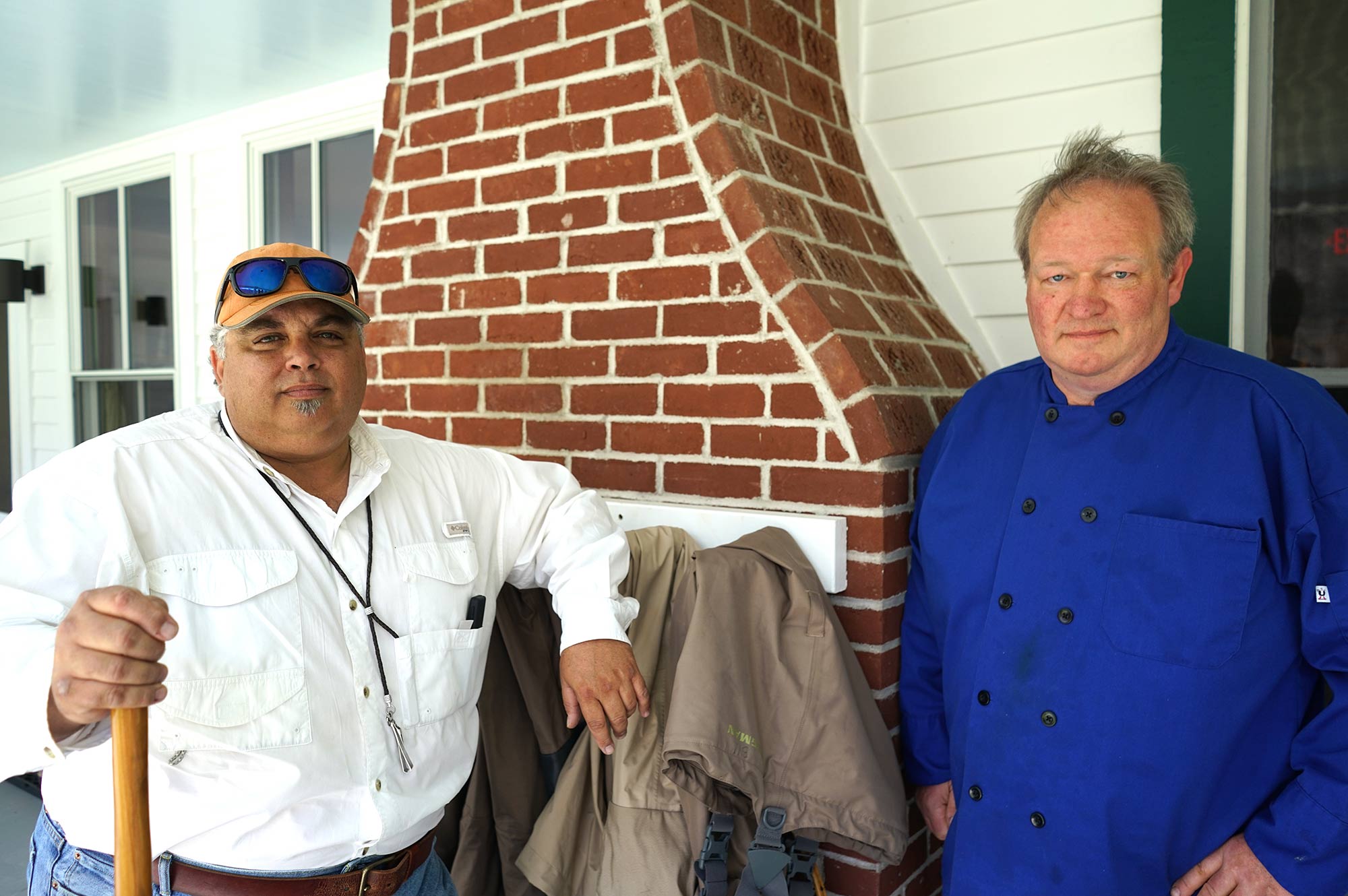 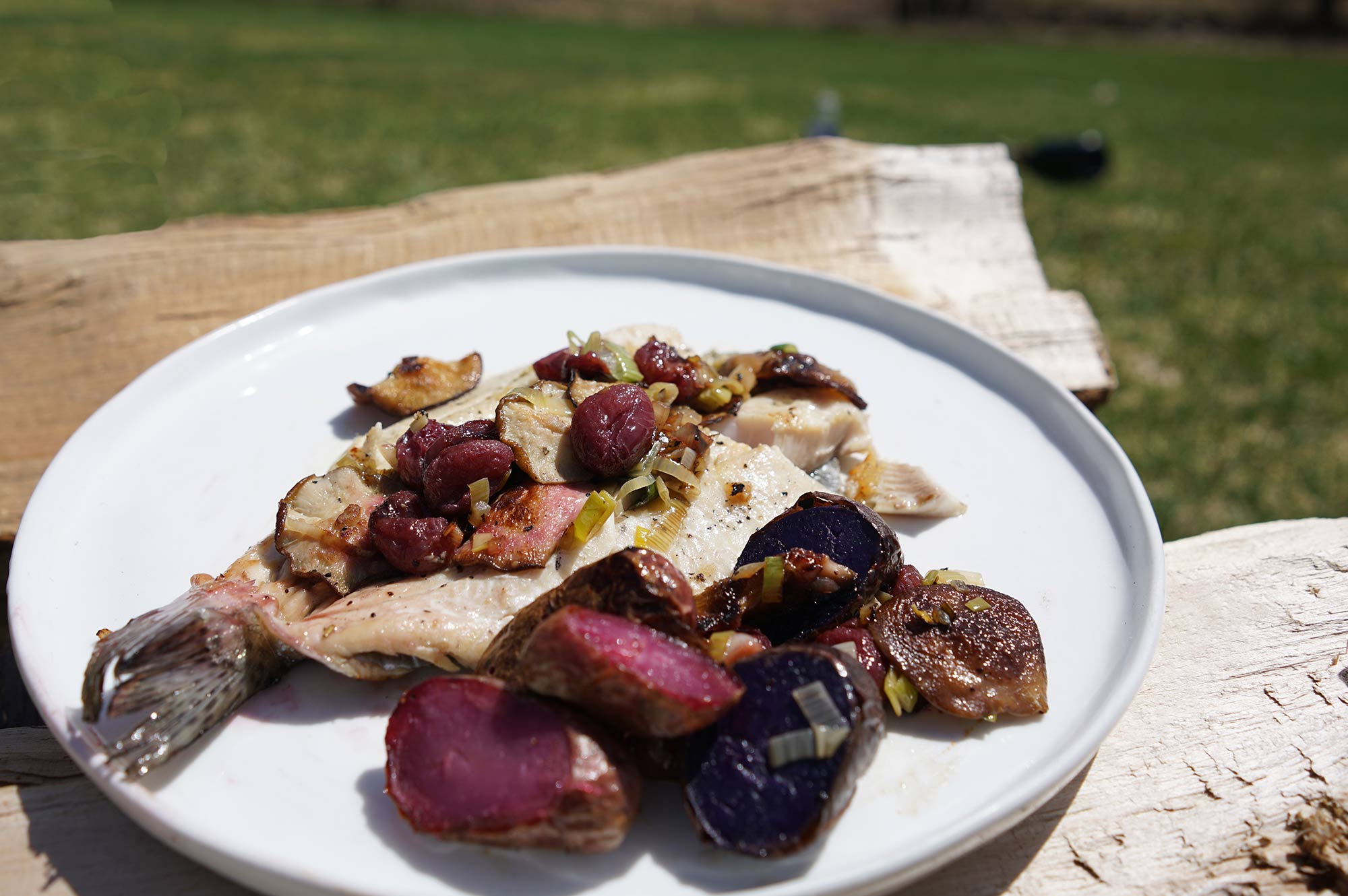 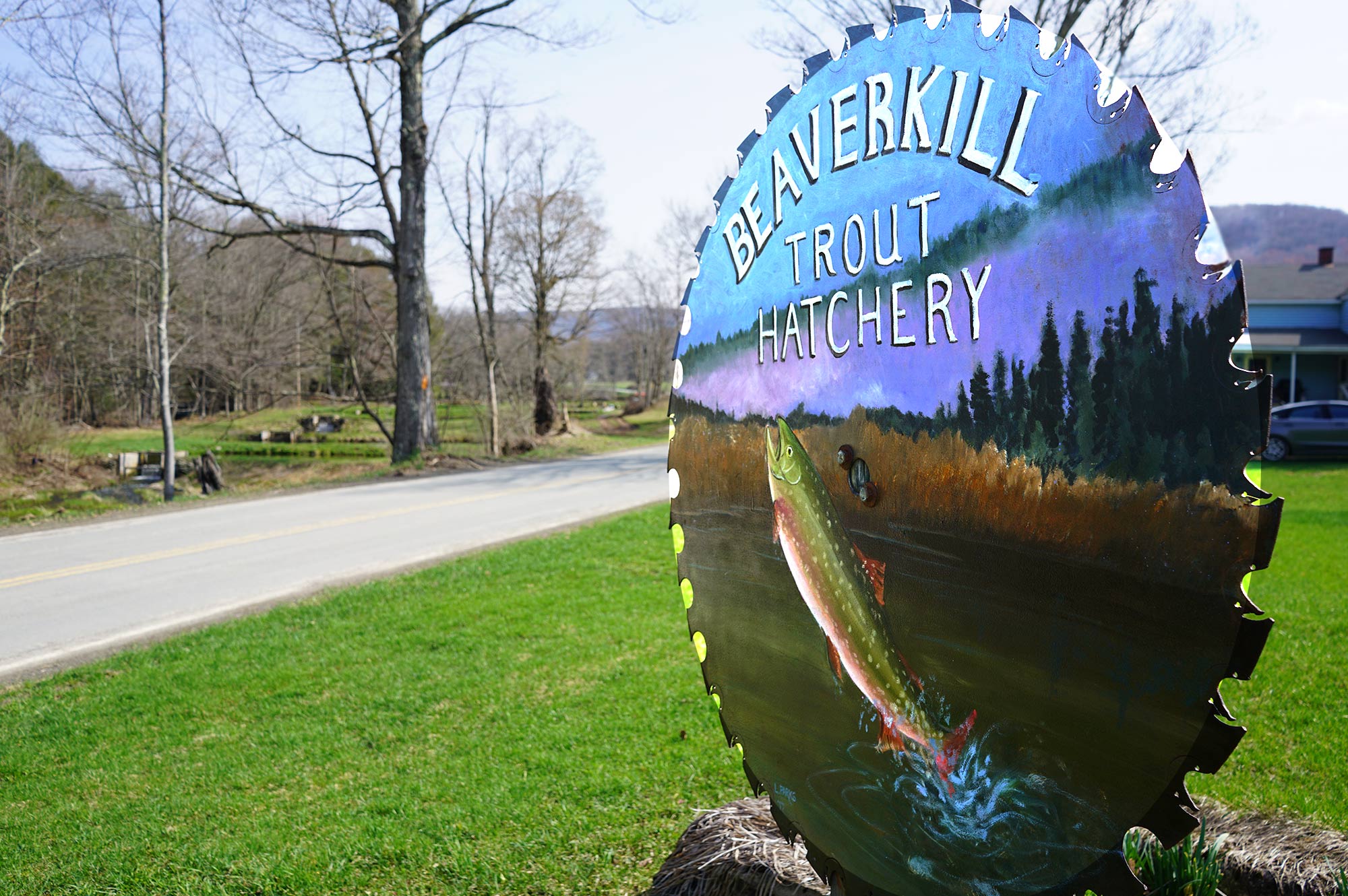 It is important to point out that Chef Sampson and his kitchen at the BVI aren’t inclined to a “hook and cook” approach. However, their long standing relationship with Sherry Shaver and her family, which has been farming for trout just a few miles up river since 1963, provides for a perfect riverside trout dinner. On this occasion the Beaverkill Trout Hatchery rainbow was pan roasted over fire with shitake mushrooms, red potatoes, and hot grape relish. 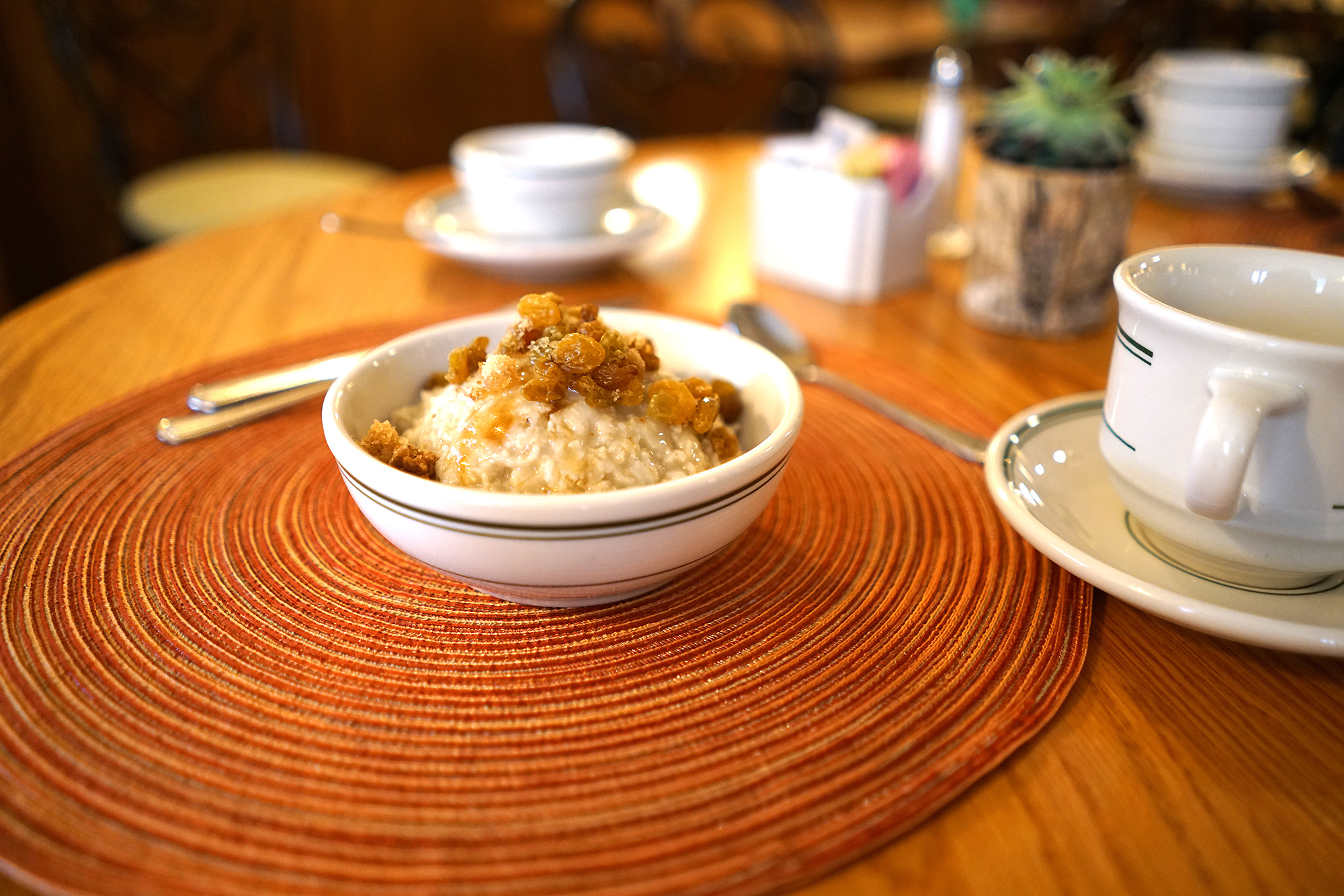 My mission to step away from the fast pace of daily life seeking warmth and kindness was accomplished. In an effort to hold on to the feeling for one more day after a delicious evening at the BVI, we rose early, had breakfast and then drove up the road to meet Sherry Shaver and learn more about her family’s unique approach to farming. Then we traveled 20 miles west to the Upper East Branch of the Delaware river for a float trip with Galen and Nick. But that’s another story and will be told on another day. Thanks for joining us on this American rivers tour, I’ll remember my visit to the BVI as a day in paradise. 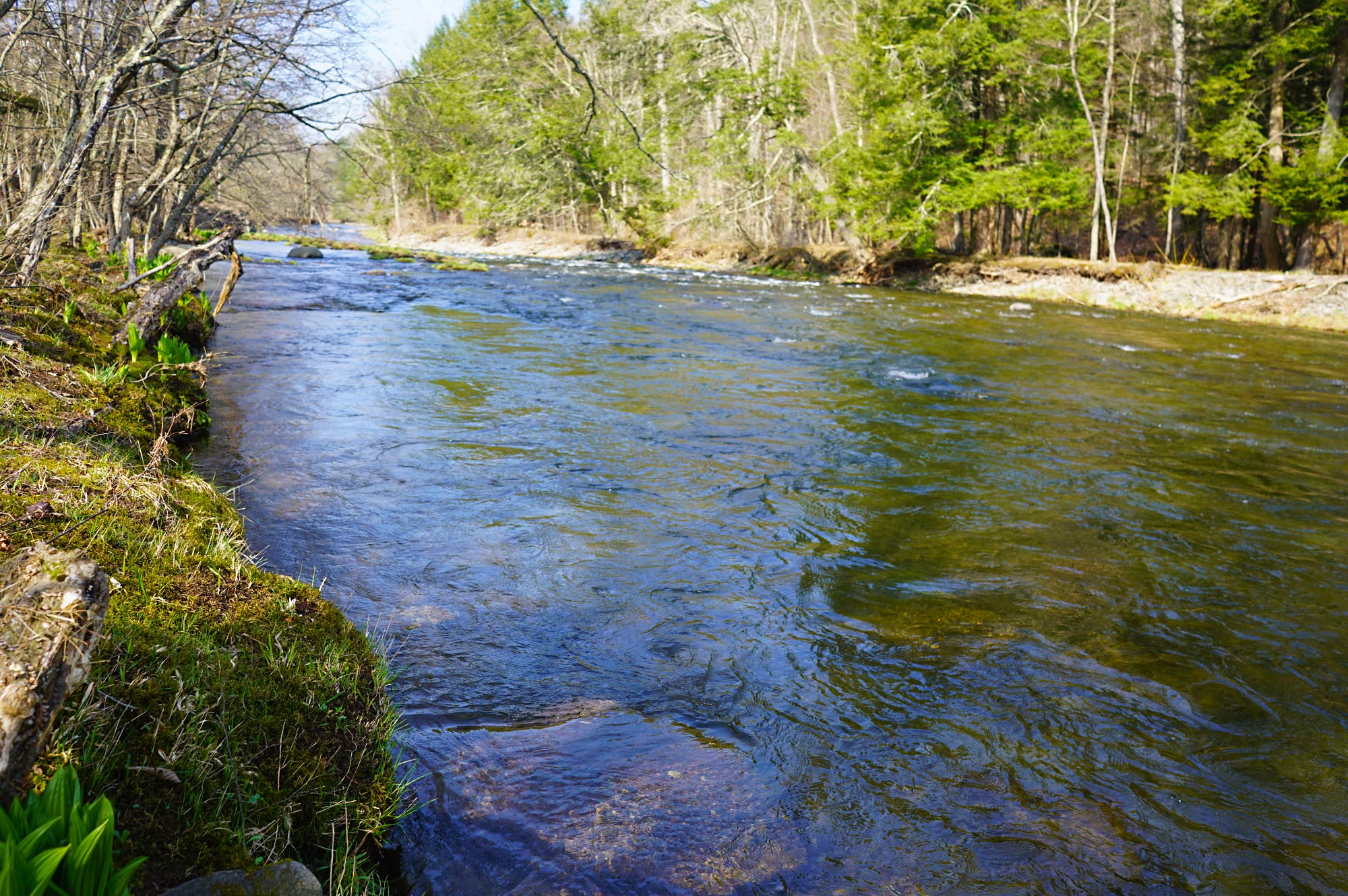