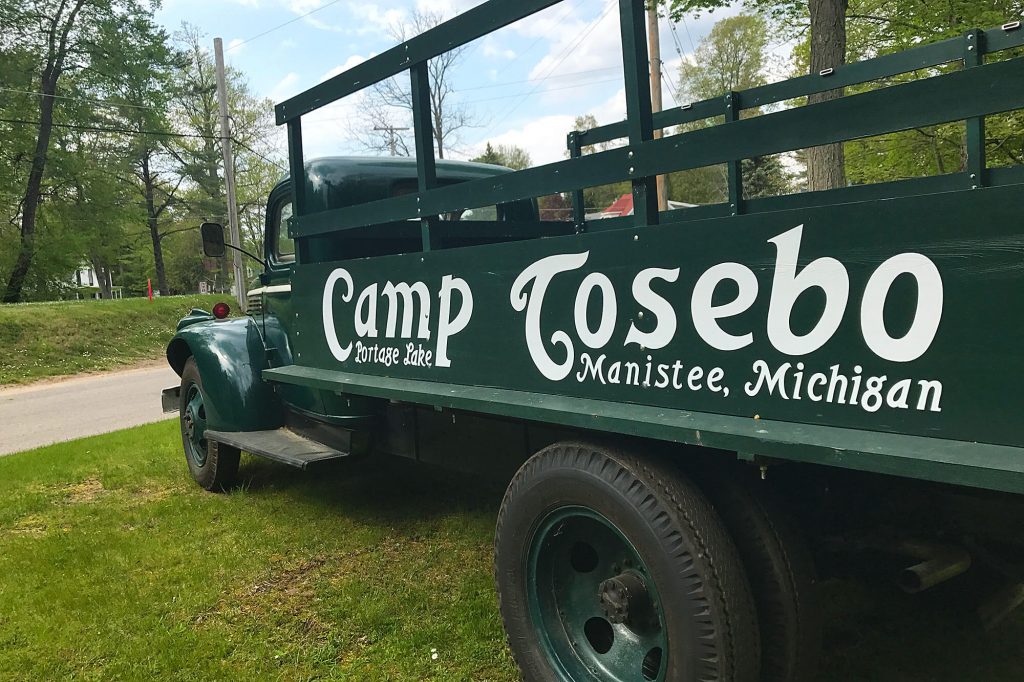 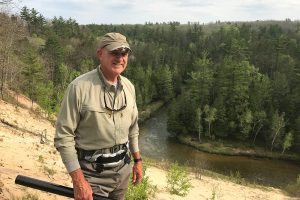 BONDING ON THE RIVER:
Sharing the Solitary Experience of Fishing Together

with Dr. Mark Seipel in the Manistee National Forest

It was with some trepidation when I pulled up into the Detroit airport with the “canned ham”,a vintage 1962 Yellowstone camper hooked up to my truck. I was there to pick up my brother-in-law, Dr. Mark Seipel, for our first fishing trip together finally, after all the years I’ve known him as my sister’s husband. We were headed for the Manistee, and I had hoped for some GPS guidance when I pulled over to the security lane. But the metro police officer didn’t share my enthusiasm for the trip as he questioned what I was doing there, smiled and said if I wanted to navigate “do that somewhere else – it’s time for you to move on”. 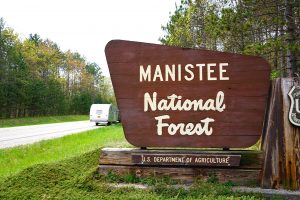 Our transition from urban jungle to national forest land was gradual and very pleasant. Mark and I have known each other for over thirty years, occasionally chatting about fishing while waiting for my sister Julie to come to the phone, or talking at various family gatherings over the years. But distance, and very different lifestyles when we were younger, prevented us from really spending any real time getting to know each other. Inviting him to join me on this leg of my American Rivers Tour journey was for more than just companionship, it was my chance to dial in on the man who has loved and  taken care of my older sister for most of her adult life and a man who also shares my deep love for fishing.

By the time we reached the town of Cadillac, on the south end of Lake Mitchell, we had not only gotten well acquainted, we also had a plan. 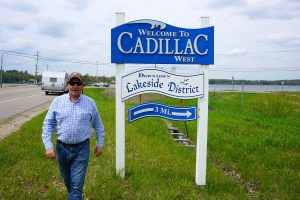 It was early enough in the afternoon for us to drive the additional hour to Manistee, find Camp Tosebo, our lodging for the night and then head back to the Manistee National Forest and track down the fly shop recommended by my friend from Chagrin, Mick the bartender.

Arriving at Camp Tosebo was like taking a step back in time. Memories from almost fifty years ago, when I was a nine year old camper, filled me with delight as I walked the beautifully maintained grounds that have changed little other than the fact that it’s no longer a boys’ camp but a family lodge for hire. 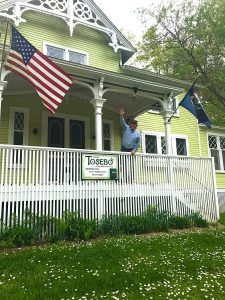 On the porch at Camp Tosebo

The dining hall remains, decorated exactly as I remember it right down to the rail around the edge of the room with camp photos, including two with a buck-toothed, toe headed Colin Ambrose surrounded by twenty eight of his best friends from the summer of 1968 and 1969. Camp Tosebo was one of the places where I learned the basics of outdoorsmanship, fire building, camping, fishing, and how to ride a horse—all activities that return to my dreams fifty years later as I reflect on childhood and month long stays in the Michigan woods on Portage Lake.

After a quick stop to drop off our bags in the counselor’s cabin where we’d spend the night, we unhitched the camper and headed back to the Manistee National Forest in search of D-Loop Outfitters to find the owner Dave Barkman. As I travel across the country to towns and rivers unknown, I always find out that bartenders are a great source of information about the who, what, where and how to get there. Mick the bartender from Chagrin Falls, an avid fly fisherman, gave me all I needed to find D-Loop Outfitters which was in the perfect setting, surrounded by woods in the middle of the Manistee National Forest.

It didn’t take long, and soon enough Mark and I were shaking hands with a man that fit Mick’s description: tall, friendly, knowledgeable and quick to share his special map. Another tip I’ve learned on my fishing trips is that it’s important to engage the guy who runs the local fishing supply or tackle shop—and that means just don’t just pick his brain, BUY SOMETHING. While you can find some facts on line, no one can give you inside info like a local guide on finding out how to navigate the roads, the best places to fish, where to park, where to “put in”, and handy tips like, “do I need 4-wheel drive” to get to the river.

The difference between my brother-in-law and I became immediately apparent in how we engaged ourselves with D-Loop Outfitters.  Mark is fascinated by the analytics of fishing and all the elements of the gear, so he immediately began checking out every flybox in the store. I am drawn to the experience, the setting and learning from talking to others so I chatted with Dave about his shop and the area. We each purchased a cup full of woolly buggers and a few choice deceivers, I found a custom Simms fishing shirt with Dave’s logo on it and we were soon on our way to find the Pine River, Dave’s number one suggestion.

After driving a few miles down the road trying to make sense of the hand drawn map, we settled on a dirt road that was probably the spot illustrated with an unlabeled line. Dave had told us to take a left a few hundred yards before “Hi-37” on the dirt road and “follow it as far as you like”—but  he didn’t add that we might not be able to turn around once we’d taken the dirt road several miles into the woods. So it required a good ear as we wouldn’t see the river, rather we’d have to listen for it. Another continual lesson I learn from my fishing trips:   BE PATIENT AND FOLLOW YOUR INSTINCTS.

When we finally did park the truck and stepped out, listening through the budless trees, it was clear to us that we were close.  After a short 500 yard reconnaissance, I looked down a 200 foot dune and there it was, the rambling Pine River, twisting and turning through a tree lined canyon. 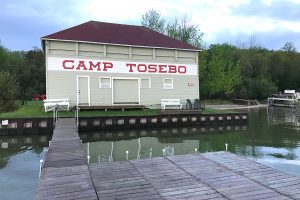 Mark and I checked it out and took a few photos before making our way to the edge of the dune. Then, as if stepping off the edge on skis, we dropped into a chute, ascending onto the sand and down to the river. For the next three hours we split up and walked the shallows of the Pine, casting our streamers into the deep cuts on the edges and around the bends in the river. A perfect start to our adventure in Michigan. No rises, no hits but a spectacular setting all the same.

That night, after a simple meal at The Wanigan Grille outside of Manistee, Mark and I settled into the counselor’s cabin and admired the hieroglyphics on the walls, initials from campers and other inhabitants over the years that recorded long stays and a sense of belonging. As the rain fell hard on the roof of the cabin,  I fell asleep quickly with memories of Tosebo campfire songs dancing in my head. Waking early the next morning to clearing skies, I took my time walking through the camp and down to the lake, finding the boathouse exactly as I remember it from the 60’s.

We were on the road before 7am, happy to have clear skies and off to find another of Dave’s recommendations, The Little Manistee. This time the map did the trick. Only stopping for directions from a local on County line road, we found the bridge that Dave had directed us to and parked in the camping area just above it. 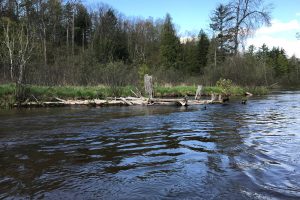 Again we separated and fished alone. I put in below the bridge while Mark walked up river, and in no time I was in deep fisherman’s meditation. Quietly casting across the current, allowing my streamer to float over and under logs, through seams on the edges and floating a blue olive dry fly on a long flat stretch. After an hour an half, no fish for me. Mark, on the other hand, employing his favorite set up, his over under (dry fly, floating on top with a nymph under it bouncing along near the bottom)  hooked up and landed several small, feisty brookies. With a 1pm float scheduled on the Au Sable, two hours away, it was time to leave this idyllic spot and head north. Stepping off the river, we spotted a bald eagle and then watched as a muskrat working at building his den just under the bridge.

Emotion doesn’t play into the vocabulary of Midwestern men of our generation, but we were clearly both moved by this experience. Quiet, cool water on a sunny morning is tough to walk away from, but adventure on the Au Sable lay ahead. The American Rivers Tour adventure was just beginning.