I rode with Michael Cinque to Shylerville then finished the ride alone.
Charlie joined for a few miles in the middle and ran shuttle.

Total distance traveled exceeded 50 miles, all heading north on the trail in one day. A personal best. 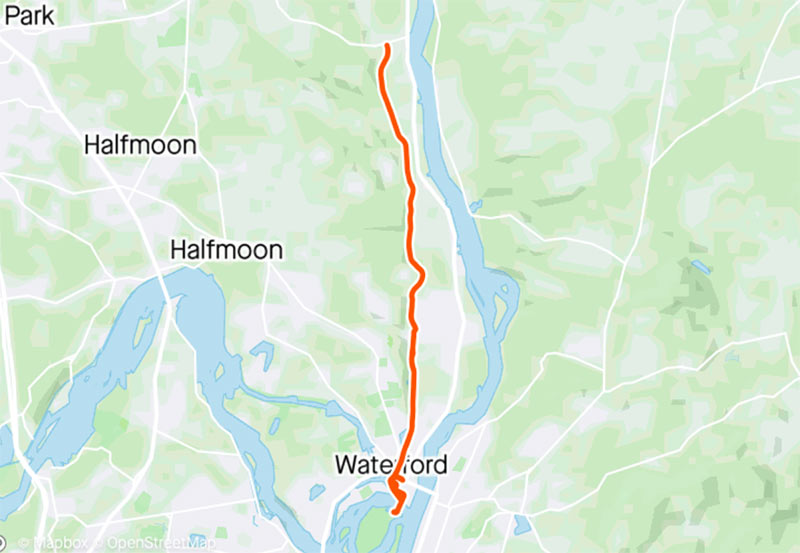 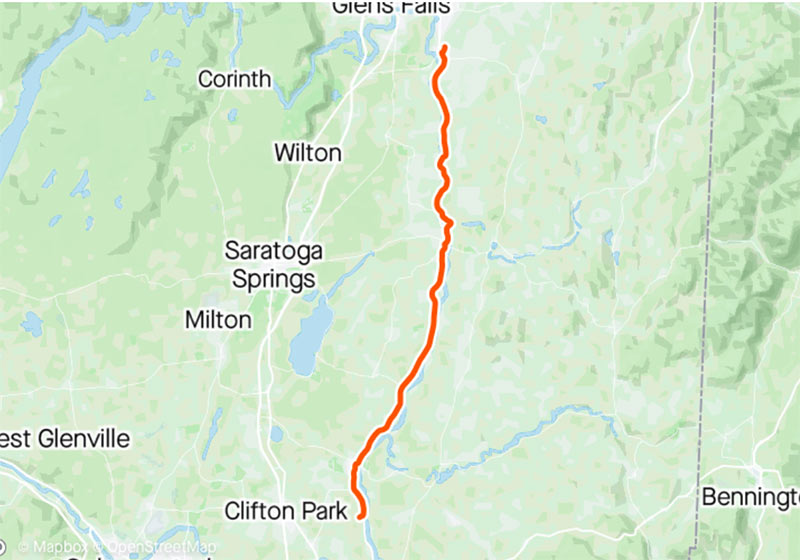 Charlie and I pulled out of his driveway in Hudson at 7:30 am heading north, we reached Peebles Island State Park about 45 minutes later. The same trail I’d seen full of people on Sunday was deserted, just me & Charlie. We found the parking lot empty, too. The most significant structure on Peebles Island stands about 4 stories tall, over an inlet to the Hudson River, a smokestack that’s been preserved to commemorate a shirt collar factory run by Cluette, Peabody & Company in the late 1800s. Now an office complex housing the Division of parks, recreation & historic preservation, the property was purchased by the state and preserved for office use in the late 1970s. 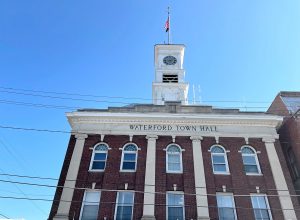 After a brief history lesson, we set out across the bridge on the north side of the island and peddled through neighborhood streets for several blocks until the stone dust trail started, bordering a long corridor of granite block canal, built in 1862. These canals were used by early settlers to move building products and commerce of all kinds from north to south, reaching the Hudson River and on to Kingston, Poughkeepsie, and Manhattan. They aren’t useful in that way any longer but the banks of each canal hold up very well as bicycle paths so they repurpose very nicely. 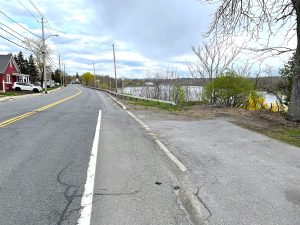 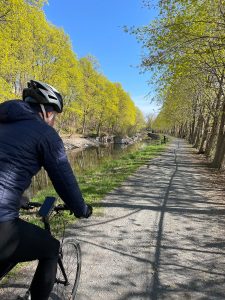 As we rode through the farms and marshlands we came across beaver homes, bird sanctuaries, and several retired firefighters walking their dogs.
One man was extremely thankful for the Empire State Trail because he found it less populated on weekdays and safer for his mastiff Scout. Big dogs need space. 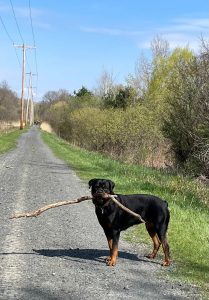 When we reached Waterford it was time for breakfast so we turned right off the trail riding toward the town hall. Just one block down the street we came upon Don & Paul’s where the sign out front promotes “2 eggs any style” it was an excellent choice. Arriving at 9:45 we were able to grab the last open table in the cafe, at the back of the dining area in a room with a pool table covered by a plywood board. We both had coffee and 2 eggs, Charlie’s fried and mine scrambled. The waitress Annie was cheerful and efficient. 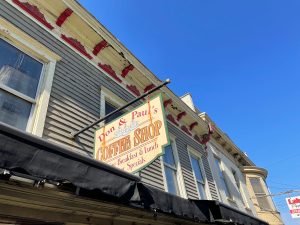 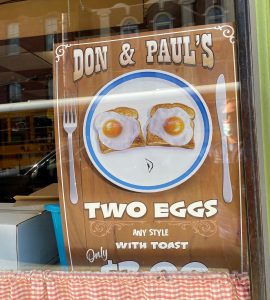 Back on our bikes 20 minutes later we rode past more farm fields stopping several times to watch birds, beaver, and turtles. At one point along the way, a mink shot across the trail in front of us. The stone dust trail continues for several miles with very few homes and businesses in between. When arriving at the Halfmoon parking lot at 10:30 we noticed the lot could accommodate 8 vehicles, only one space was being used. 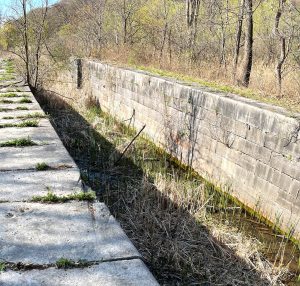 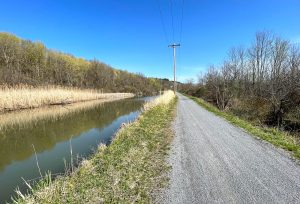 The return trip was a breeze, 12 miles in an hour. Charlie put his bike in the truck and headed to Schuylerville, I loaded my F150 and drove to Albany Airport. My pal Michael Cinque was coming to join us from Florida, his flight was early. The round trip was fast, back in the parking lot at Halfmoon by 1 pm we were on the trail in a jiffy. 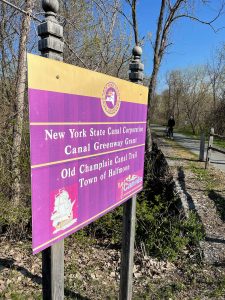 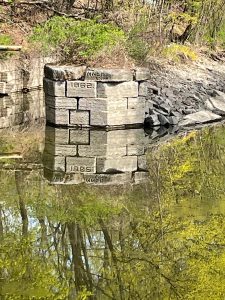 Heading north out of Halfmoon the trail is primarily road riding, some areas are comfortable with clean, wide shoulders. Other areas are tight and not for the faint of heart, the cars are driving past at 50+ mph,  the edge of the road is scattered with debris, it’s a dangerous dance. We rode through the small towns of Stillwater and Mechanicsville, passing neatly maintained row houses as we picked our way through the village after losing sight of EST signage, not an uncommon occurrence. 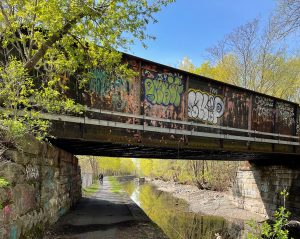 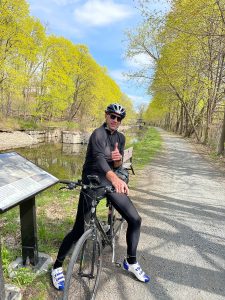 The road north of Mechanicsville is active, trucks of all sizes whizz past, semis, panel trucks, loggers, and motorcycles. It seems that Schuylerville is a hub for the trucking industry. We saw several large sod farms along the roadway, stone for landscaping is another consumer item that must be mined in the hills and mountains on the edge of Lake Champlain. Although there are some spectacular views on this part of the trail, it’s clearly the most dangerous stretch that I’ve encountered.

After about an hour of riding, we met up with Charlie. He’d jumped on his bike in Schuylerville at 1:30 after a phone conference call, this was his first time meeting Michael. We chatted briefly and agreed on a plan, Charlie’s front brakes had been compromised and seemed to need repair. The shop in the next town was closed so he needed to get to Saratoga Springs before 5.

It didn’t take long to reach Schuylerville. On the edge of town, we turned into a historic site. A large yellow home was built in 1777, once the home of General Phillip Schuyler, father-in-law of Alexander Hamilton. The home and grounds are well maintained, a proud example of what our forefathers were capable of creating over 250 years ago. 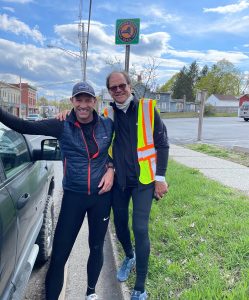 We rode through the park and over a bridge, as the trail passed the Schuylerville post office my friends hustled across the road while I waited for a car to pass. At that moment, a man walked out of the post office and said hello. He asked me if I was riding on the Empire State Trail, I smiled and briefly told him about my journey from Battery Park. Riding the new and old stretches, my story of Tuesday’s on the trail. He smiled and told me that he was a bike enthusiast too, in fact, he owns the bike shop in town. 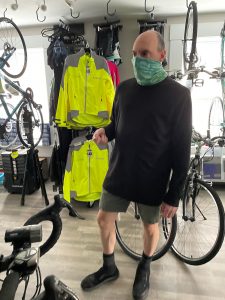 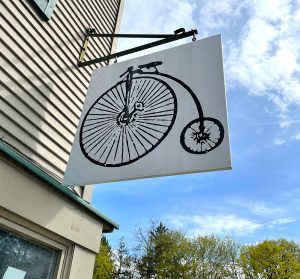 Adirondack UltraCycling is on the main drag in the middle of Schuylerville, John Cicero, its owner is a passionate cycler who has dedicated his life to the sport. This was obvious when he told me that even though his shop was closed he would help Charlie fix his brakes. When Charlie mentioned that his web search indicated that John’s shop was closed we could tell he smiled from beneath his mask “that’s why I have a bell on the corner of the store, just ring it, when I’m there I help people.” 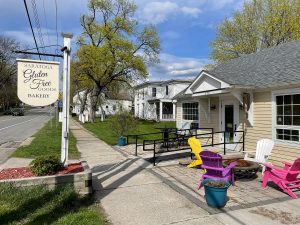 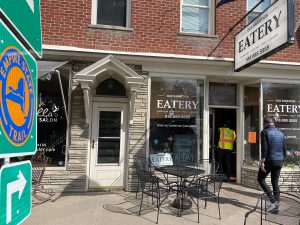 After a quick adjustment and a tour of John’s tidy shop, we asked him where to turn for lunch. He recommended the “Saratoga Gluten Free Bakery” one block north but it was closed for the day. John also suggested the “Old Saratoga Eatery” a block south of his shop, we found it easily as there’s an Empire State Trail sign directly in front of the shop. The ladies at “The Eatery” took great care of us, we enjoyed a pizza at a table on the sidewalk. The crust, like a crisp light cracker, was my favorite part. 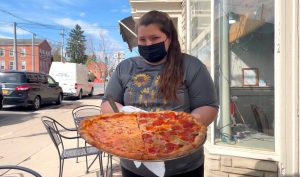 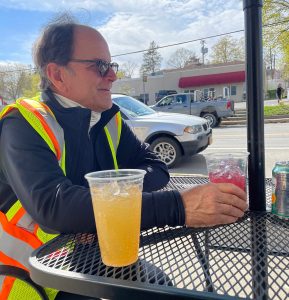 It was 3:45, Charlie and Michael agreed to drive back to Halfmoon to pick up my truck and I forged on up the Canalway to Fort Edward.
The first six miles of that section of the trail were perhaps my favorite section to date. The trail follows several waterways including a river, large canals, and the southern end of Lake Champlain, one long section features a riverside ride on a wide country driveway that seems to serve about 30 homes over several miles. The afternoon light filtered through a canopy of trees hanging high above the dirt road, no other people around. 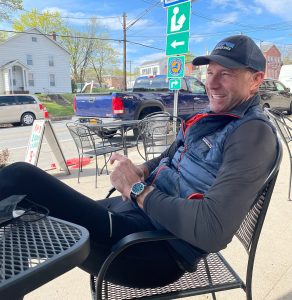 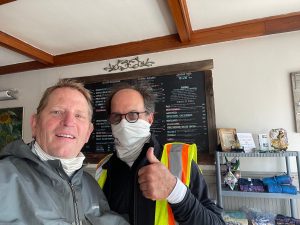 The second half of the Schuylerville to Fort Edward section is on-road riding. Some sections on busy rt.22, some wander through small hamlets where the traffic slows and the trail passes local firehouses and crosses more canals. 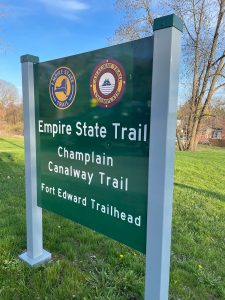 When I reached Fort Edward it was a blessing, my tank was empty, I was exhausted. Checking Strava I found that the total distance traveled exceeded 50 miles, all heading north on the trail in one day. A personal best, I was done. 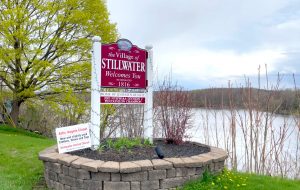