After an overnight at Charlie’s house in Hudson, my morning started early driving north to Ticonderoga with the sunrise. It was another blue sky day and the drive on I 87 was visually thrilling, filled with the texture of Adirondack rock and trees in spring color. My Google map directed a route that followed the shores of Lake George from end to end, morning light reflected like jewels off the dark water, it was spectacular. As luck would have it I followed alone school bus most of the way, grateful to slow down and move at a modified pace. I took in the sites as each small town came and went. The village of Silver Bay reminded me of Sag Harbor with its roadside marinas, restaurants, and hotels. Clearly, a place where families gather every summer for a week or two in cool mountains to escape the heat of the city. Eventually, the bus came to a stop in front of one of the many hotels and picked up 2 youngsters, as it turned around I realized that they were the first to board the bus. It’s a long way to school for those kids. 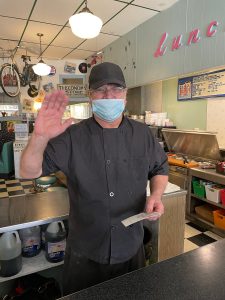 Upon arrival in Ticonderoga, my eye was drawn to the spring flowers in their public parking lot, all in full bloom. It was nice to see a full assortment of flowers including tulips not just daffodils in a communal spot, the deer in Ticonderoga must have ample food, the tulips hadn’t been nibbled. 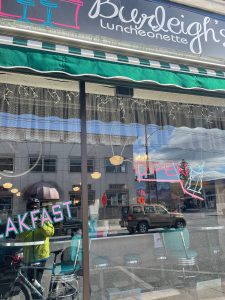 I quickly pulled the bike from my truck bed and set up for the day, then rode to Burleigh’s Luncheonette, one block from the trailhead for my first cup of coffee and an egg sandwich. The owner, a friendly man working the counter-side grill told me that he’s looking forward to a return of normalcy and the end of pandemic controls. His lunch counter, clean and organized, was surrounded by booths on exterior walls with bikes hanging from the ceiling and old LP records nailed to the walls. Burleigh’s is an authentic old-fashioned lunch spot that serves a special $10 dinner on Friday nights. My morning visit there was a perfect way to start the ride. 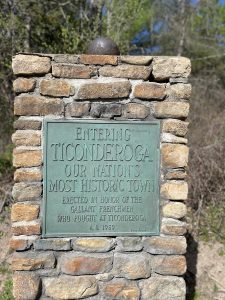 Heading out of Ticonderoga is an instant heart starter with a short uphill climb on the edge of town. Empire State Trail signs line the edge of the road heading north and the route is easy to follow. This section has a great variety on the road’s shoulder, corners with side rails are very tight, straightaways are wider and easier to manage, sometimes the edge of the road seems to crumble beneath the weight of bike tires, it’s a crapshoot. Referring to the EST website I’m curious about what experienced riders do that is different from people like me who are new to bike adventuring. How do they deal with, for instance, logging trucks on narrow roadside shoulders? 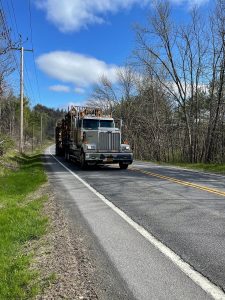 After several miles of rolling hills and long, farm-lined straightaways, Gunnison Orchards appeared on the eastern side of rt. 9N, a short stop was in order, the long rows of apple trees were just starting to bud. Too far north for blossoms in late April, the trees looked thin and hopeful in anticipation of warm days to come. The main roadside buildings at Gunnison Acres have signs encouraging travelers to come in, so I did. Once inside I found shelves filled with bags of apples, each bag stamped with an apple variety, they offered about 6 choices on this sunny day in April. The Wild Twist variety was offered for samples, a welcome and delicious surprise. 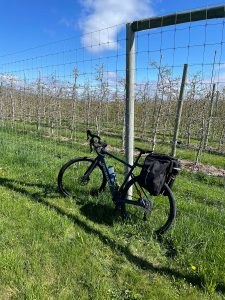 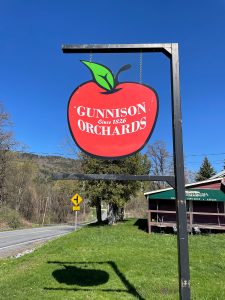 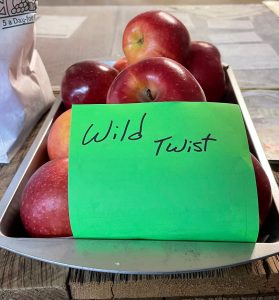 At this point in the ride I started to think that I’d completed my climb through the Adirondacks, the mountain assenting was behind me but rolling hills continued. The road seemed a little safer and riding became more relaxed and less stressful. 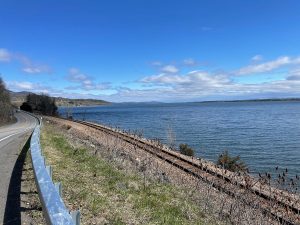 Then, coming up from behind me I noticed a big yellow truck with a cherry picker, there was a guy in a pickup truck that pulled into a parking lot just in front of me and he stepped out of the truck with a rolled-up banner under his arm. I stopped and inquired about their project and was happy to learn that they were hanging honor banners, celebrating American veterans. The same banners that I’d been admiring for the last 150 miles in almost every town I’d ridden through. 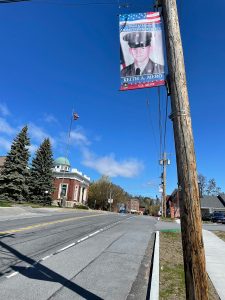 I introduced myself and told the man that I’d been admiring banners displayed in almost every town I’d visited since Westchester county. He smiled and introduced himself “I’m Keith Mero, my banner is on display in Mirah”. It turns out I’d chosen Keith’s banner to photograph just an hour earlier as I biked through his hometown. A random coincidence? Meeting Keith made my day. 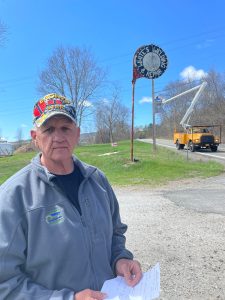 Another 7 miles up the road, my pal Jimmy Levison pulled over to check on me. He asked me where the trail was, the road’s shoulder was too thin to be considered a trail in his opinion.
I explained that the EST website warned me that this section was for experienced bicycle riders only. He stood his ground, “it’s not a trail”.

Jimmy joined me to help shuttle vehicles and fish the Adirondacks and Lake Champlain. We had set this plan in motion over a month earlier over lunch at Estia. Our guide was booked and we were set to target native rainbows in a brook just north of where I was riding, up 9N. I pedaled another 4 miles, then Gene’s came into view and it was time for lunch. 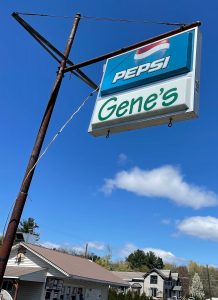 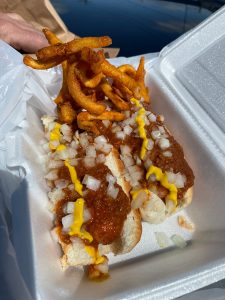 Lunch at Gene’s like several other small roadside eateries in the Lake Champlain region features Michigan dogs, chili dogs upstate NY style. I still haven’t been able to figure out why they are referred to as Michigan but I found mine to be delicious. The chili is smooth, made with finely ground beef, mild spices, and a tomato paste, I think? Topped with a little chopped onion, they hit the spot. 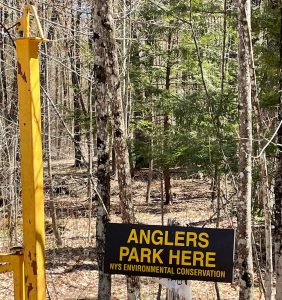 An hour later we met with Sean Platt, a local guide who Jimmy met through an introduction from his friend Rachel Finn, renowned fly-caster and fishing guide in the Adirondack region. Sean sent us a pin by text and we found the riverside parking area. Sean met us in the woods and we spent a perfect evening together on a small river in the wilderness fishing for native rainbow trout. 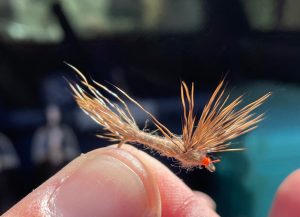 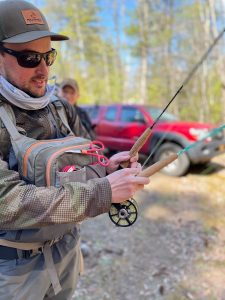 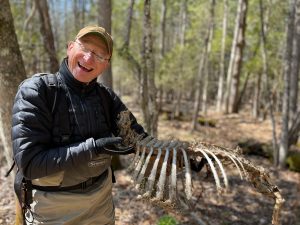 When I decided to take on the challenge of riding a Specialized “Gravel bike” from Battery Park to Canada, it was with the promise of a few days of fishing with a local expert who could introduce me to the magic of the mountains in New York. 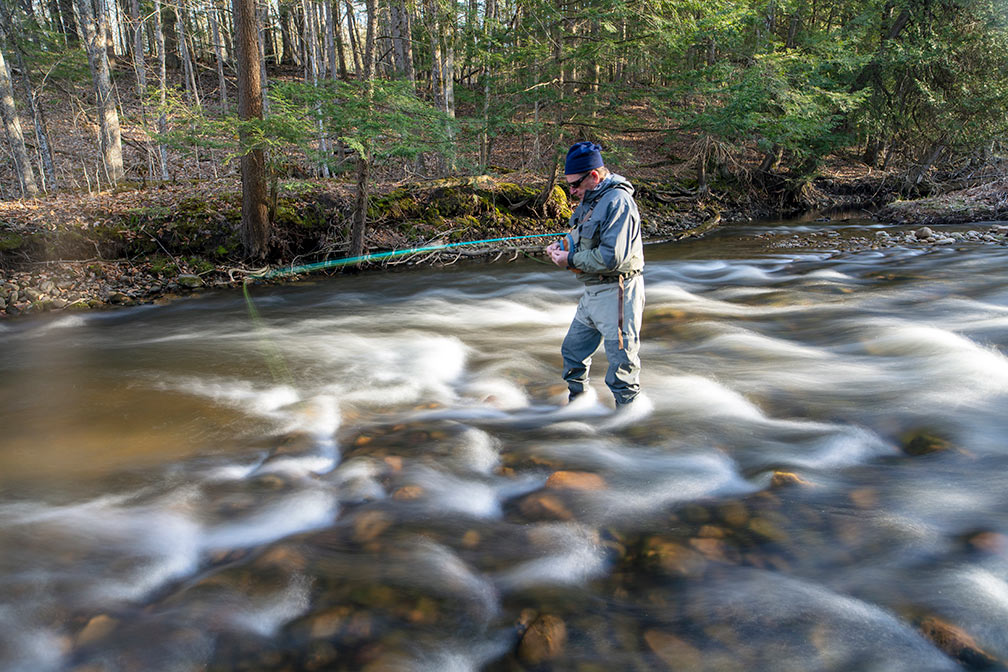 I’ve wanted to fish in this region for 30 years and finally, my time has come. I caught 3 small fish on a fly and it was better than I could have dreamed. We walked through the woods, got familiar, learned about each other, and laughed at Jimmy’s jokes. 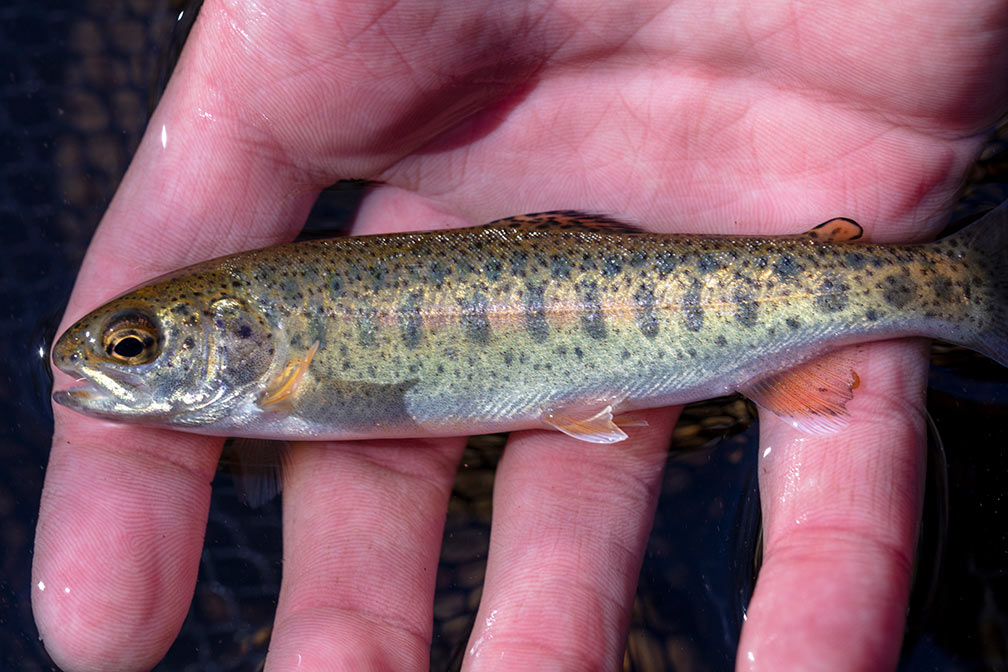